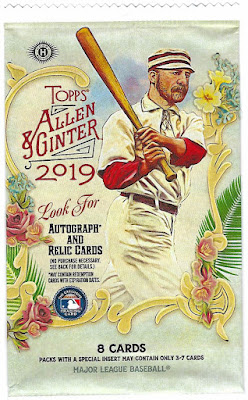 As Topps has increased the number of products that they release each year, I realize that I have a slight problem when it comes to these new releases. I often get super attached to these sets when they come out and buy a lot of cards, only to move onto the next set a month or so later.

No matter the product, it seems like a given set captivates my interest for a short time before I turn my attention to another new and exciting set. This cycle was apparent throughout 2017 and 2018, and it's something I'm trying to avoid in 2019.

At this point, I've acknowledged my favorite Baseball card releases as well as the ones that I'd like to avoid. Now, all that's left to do is follow through and purchase packs from sets that I love rather than the brand new set that I'm not going to be collecting a month from now.

Each and every one of those products has an extensive range of base cards, inserts, and parallels as well as the possibility to deliver incredible value. Those 2 traits are, in my opinion, essential to any stellar release.

Last year, I was fortunate enough to open 2 of these fabulous products (A&G and Chrome) at The National, something I'd like to do again in 2019. Even though I'm not as fond of the Allen & Ginter set design this time around, the oddball inserts, in particular, make this set a standout year after year.

Although I'm leaving for Chicago next Tuesday, I wanted to see this year's A&G cards in person so that I can decide whether I want to buy more of this set at The National or not.

I wasn't a huge fan of the base set when I saw the cards online, so we'll see if anything changes following this hobby pack break. 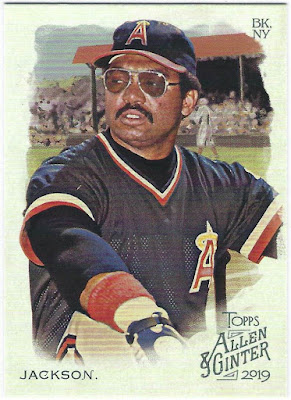 While the color splashes in the background have become synonymous with the Allen & Ginter set, I'll admit that I like this year's design way more than I originally thought I would. If nothing else, the traditional background works for Reggie Jackson's card.

It's going to take some getting used to, but I was pleasantly surprised with how fond I am of this year's design. 2017 and 2018 were both terrific as far as the base set was concerned, so I'll have to open a little more 2019 A&G to formulate an opinion.

Plus, I'm ecstatic that Topps chose to feature Mr. October as a member of the California Angels instead of the teams that we always see him on (Oakland and New York). 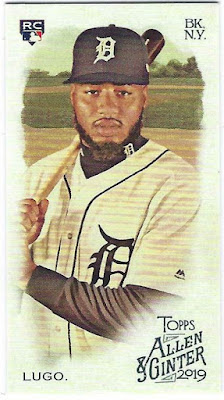 From the breaks that I've seen of 2019 Allen & Ginter, the minis are often the 2nd card in the pack, something I don't believe we've seen before. Not that it's a big deal or anything, but we've grown used to finding them in the middle along with an insert or hit.

Per usual, you get 1 mini per pack of Allen & Ginter, and mine happens to be Dawel Lugo of the Detroit Tigers. At this point, my only major complaint about the set design is that it doesn't say the player's position on the front or even the back of the card.

I keep up with Baseball, but only to a certain extent. If Topps doesn't tell me what Dawel Lugo's position is, who knows when I'll actually find out? 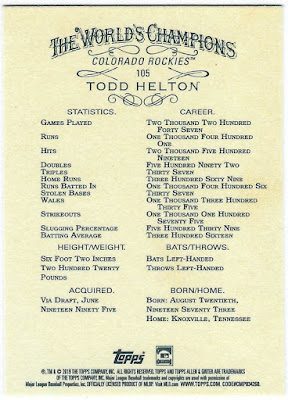 I know that some collectors don't enjoy seeing recently-retired players appear in sets like A&G and Stadium Club, but I don't have a problem with Todd Helton making the checklist. In fact, I'm elated to see Mr. Rockie get some love from Topps.

I'm using Helton's card to point out the card backs, something that's stayed consistent with the Allen & Ginter set throughout the brand's 10+ year history. This time around, they're shaded with a faint yellow to give them more of a vintage feel than we've seen in the past few years.

Come to think of it, the 2019 A&G design is the most authentic reproduction of the original Allen & Ginter cards than we've seen in some time, so I must applaud Topps in that respect. 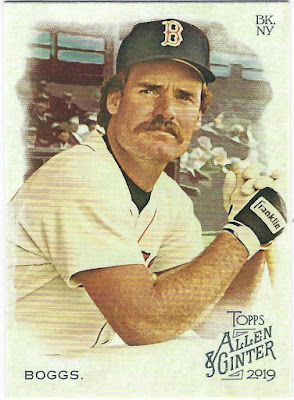 Whether I end up building this set or not, the fact that 3 of the first 4 cards that I pull are players I collect is awesome. Even though he's featured in sets like A&G and Archives almost every year, I never get tired of pulling Wade Boggs cards, even when he's shown as a member of the Yankees.

The closer I look at this year's design, the fonder I'm becoming of the set as a whole. Granted, the base set isn't perfect, and I still prefer the cards from 2018, but Topps did a nice job with A&G, as they always do, in 2019. 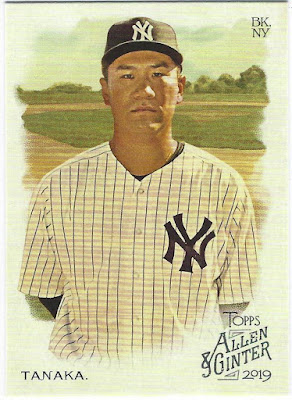 Don't be fooled, this year's A&G checklist is still 350 cards. For some unknown reason, Topps didn't print any cards from 301-351. Instead, the SPs start at #351 and end at #400. I cannot fathom a reason for doing this, so I'll assume it was completely unintentional.

In addition to being downright weird, this card numbering affects collectors like Night Owl who are trying to build A&G mini frankensets. Although I haven't tracked down minis in a while, I'm also building one of these, and Topps' poor numbering is going to limit my ability to expand the frankenset this year. 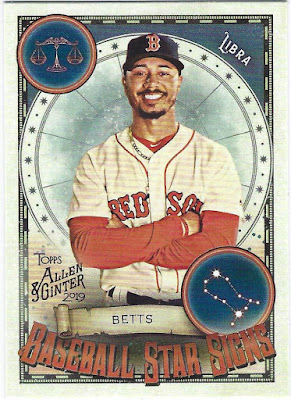 I couldn't ask for much more than 3 base cards of players I collect, an SP, and a Mookie Betts insert through the first 6 cards of my initial pack of 2019 Topps Allen & Ginter. The craziness of this product even finds its way into the Baseball inserts, because what other product has Baseball players' astrological signs?

Like myself, Mookie Betts is a Libra and the back of the card talks about how Libra's love trying new things. Clearly, this attitude worked for Betts in 2018, by far the best season of his young career.

Apparently, these are also available as box toppers, and I'm dying to see what those would look like. 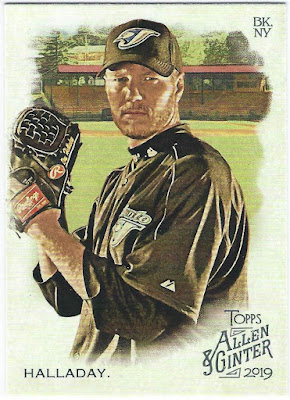 This was a very bittersweet card to pull, especially in light of Halladay's induction into the Baseball Hall of Fame yesterday along with his wife Brandy's emotional speech.

Rightfully so, Doc doesn't have a logo on his HOF cap. It wouldn't be right to choose between the 2 teams, Blue Jays and Phillies, that he played for and that he had a tremendous impact on. I'm just glad that he earned his well-deserved spot in Cooperstown. 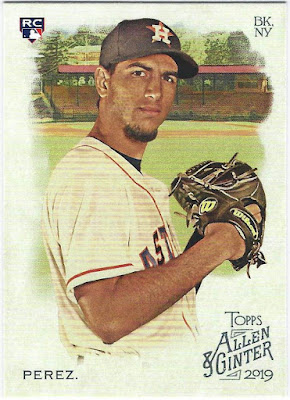 The last card of the pack may not be as stellar as the ones that came before it, but all 8 cards helped establish Allen & Ginter as an incredible product once again in 2019. It would be foolish of me to deny myself the opportunity to purchase more A&G when I arrive at The National.

It's far from a perfect set, but there's so much to like about Allen & Ginter no matter what you collect. Whether you want dogs, planes, or just regular Baseball cards, A&G has something for everyone.
Posted by Henry Blanchette at 3:55 PM