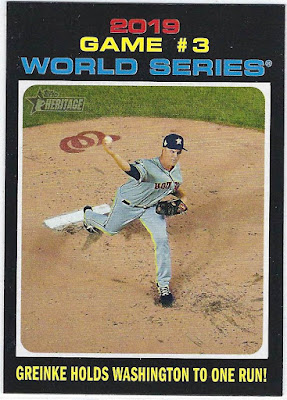 Last month, I managed just 6 blog posts. I took breaks from posting that equaled that amount of time on 2 separate occasions. Even with the shift that's occurred in the number of posts I've put out over the past few months, 6 is an all-time low for me.

In some ways, however, the breaks provided some insight as well as some downtime to figure out what I can do to ensure a better quantity and quality of material in March and beyond.

I fully intend on using the new month to get back on track toward a more regular schedule. I don't want to set anything in stone, but I'm looking to post roughly 20 times over the next 31 days. Hopefully, this will help cancel out the 6-post month of February.

Now, let's break away from talking about my blogging habits and get to today's post itself.

One of my favorite products, Topps Heritage, was released on Wednesday. It's always been a tradition of mine to rip a Heritage hobby box each year, something that's dated back to 2016. In the years that I didn't open a box, chances are I bought the base set at the card show.

The odds of pulling certain inserts as well as chrome cards and variations have decreased almost annually, but Heritage is still one of the most enjoyable products to break. After all, Topps does a magnificent job recreating their vintage sets, and, unfortunately, we're not going to have them for too much longer.

Pretty soon, Heritage will venture into products from the late 70s and early 80s, sets that still have something to offer, but let's face it: nothing can beat the sheer caliber of cards from the 1950s, 60s, and early 70s.

I have the standard 1-pack preview lined up for today, but my next post will be focused on the hobby box as a whole. 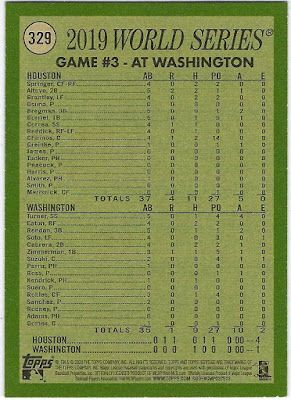 One thing I noticed right off the bat is the sheer number of Houston Astros cards that have flooded this product. Maybe I've become more observant given the scandal that appears ready to plague their entire 2020 season, but it seemed like every pack presented a new Houston card.

Making up a large portion of the cards is the playoff highlights from last year's ALCS and World Series. In fact, my first card from the product commemorates game 3 of the 2019 World Series in which the Astros beat the Nationals 4-1 in Washington thanks to a strong performance from Zack Greinke. 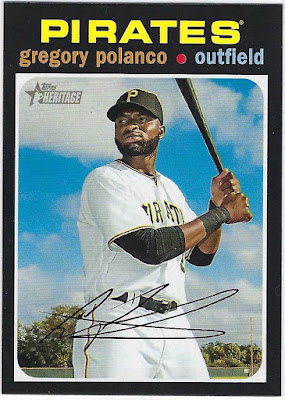 Before writing this post, I didn't even realize that Gregory Polanco missed most of the 2019 season with a shoulder injury, though I guess this sort of thing will go unnoticed by someone who pays more attention to the affairs of the American League than the National League.

Now that McCutchen, Cole, and Marte have left Pittsburgh, Polanco could be recognized as the face of the franchise along with Bryan Reynolds who had a terrific rookie season in 2019. Entering his age-29 season, Polanco seems destined, in my eyes, for a bounce-back season. 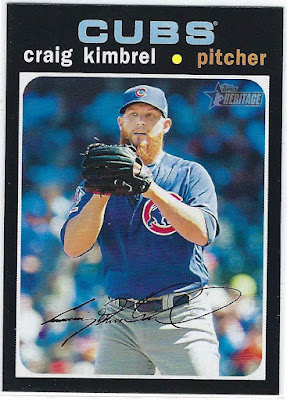 I was going to use this card to address how well Topps recreated the 1971 design, but I pulled a card of Craig Kimbrel, one of my "super collections," so I feel obligated to talk about that instead.

If I remember correctly, I pulled a Craig Kimbrel base card in my first pack of 2020 Topps Series 1 as well, a type of momentum I'd love to carry with me throughout the year. If I can land Kimbrel's base card in the first pack of everything I open, I won't have to hunt them down each time I go to the show. 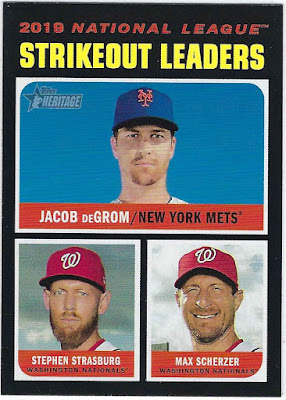 With 2 of their pitchers making the top 3 in league strikeouts in 2019, not to mention the fact that Patrick Corbin finished 4th, 5 behind Scherzer, it's no wonder the Washington Nationals won the 2019 World Series.

This impressive feat just proves once again how vital pitching is to winning championships. As dynamic as their lineup was last season, the Nationals likely wouldn't have even made the Wild Card game if their pitching had been average. Strasburg, Scherzer, Corbin, and Anibal Sanchez are the reasons for this success. 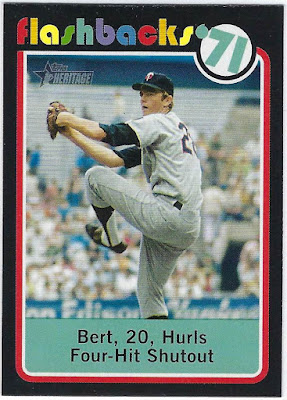 All the Heritage inserts have become much harder to pull over the last few years, but there was a time, if I remember correctly, when flashbacks inserts, both Baseball, and news, became twice as rare over 1 year.

As tough as the odds might be, Topps embodied both the era and the specific year with the Baseball flashbacks design. I particularly love the rainbow letters at the top of the card and the teal banner at the bottom. 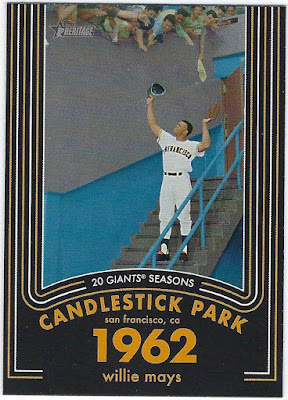 20 Gigantic Seasons is an insert set unique to 2020 Heritage that honors Willie Mays' time with the New York and San Francisco Giants with each card representing a year in his career.

The one above, for instance, recognizes his contributions to their come-from-behind victory over the Dodgers to capture the 1962 NL pennant. There won't be anything like this in next year's Heritage, so this insert set might be one for me to complete. 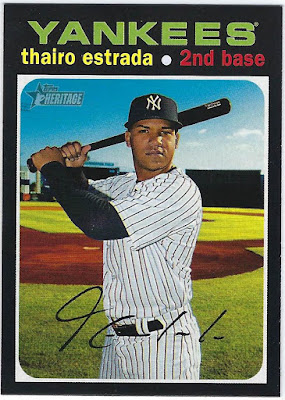 I don't know much about Thairo Estrada, so I'll take this opportunity to talk about Topps' efforts in recreating the 1971 Topps set for 2020 Heritage.

I'm not an expert on the specific color combinations of the product, but at a surface level, it seems like Topps did everything they needed to, down to spelling the player's name in all lowercase letters.

Additionally, most of the photos (Estrada's not really included) resemble the types of shots used in the set 49 years ago. 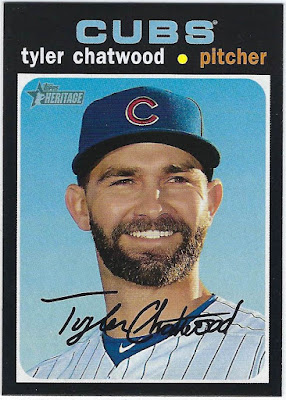 Now, this is the kind of photo you could expect to see on an original 1971 Topps card, not necessarily including the smile. There was also a wide range of unique, oddball photographs in '71 Topps as well as iconic cards like that of Thurmon Munson. 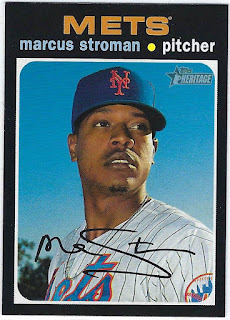 Though he put up better numbers with the Toronto Blue Jays as opposed to the New York Mets in 209, Stroman will be an integral part of their future.

They essentially replaced Zack Wheeler with Stroman, so it'll be interesting to see who performs better throughout the 2020 season, especially given that the 2 pitchers are division rivals.

I know that this post was on the simple side, but I wanted something like that as I ease back into posting regularly. I really regret only putting out 6 posts in February, and I'm hoping that March will be a month of new material and way more posts than what I did in February.
Posted by Henry Blanchette at 9:18 PM