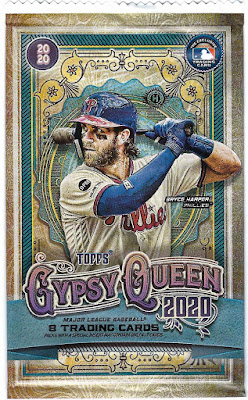 In these troubling and uncertain times, the best form of comfort, for some people, might just be a box of Baseball cards with game 7 of the 2016 World Series playing on TV.

On what would've been 2020 opening day, MLB went all out to please its fans, airing 1 re-run of an iconic game for each team on various streaming platforms. They've also used the MLB network to broadcast iconic matchups which is how I recorded the previously mentioned World Series game.

Though non-essential businesses have been ordered to close in Massachusetts, deliveries can still be made. I don't want, by any means, to order a surplus of unnecessary goods and overwhelm workers during this time.

Because of that, the 2020 Topps Gypsy Queen box that I got from Blowout will likely be my final online purchase for quite some time.

Like I do with most products, I'll start off by overviewing a single pack of 2020 Topps Gypsy Queen before, ultimately, getting to a full recap of the hobby box. I don't envision writing that until the weekend since I'm only halfway through at the moment.

But even from the pack design alone, you can tell a lot of attention to detail was exercised in the creation of this product. Bryce Harper wouldn't have been my first choice for the cover, but the color combinations work beautifully together and with his off-white jersey as well.

Each pack contains 8 cards, and there are 24 packs in a hobby box. Gypsy Queen has always been one of my favorite products, and I especially enjoy the direction the set has gone in since last year. Now, let's take a look at the 2020 release together. 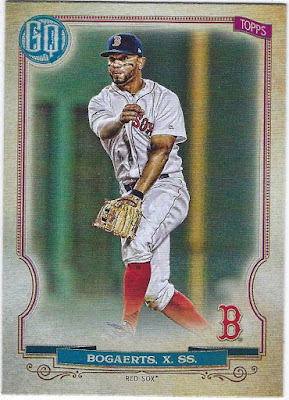 The Boston Red Sox may have traded the face of the franchise as well as their #2 starting pitcher to Los Angeles over the offseason, but seeing Xander Bogaerts' card reminds me of the dynamic duo that he and Rafael Devers were last season. Thus, I'm provided with a little bit of hope that this season is going to turn out alright.

Onto the set design which uses the same color as both the 2016 and 2018 sets. With all that the cards had going on last year, it's refreshing to see something a little simpler.

We have the GQ logo in the top left and the team logo in the bottom right along with the typical information that you'd expect to see on a Baseball card.

The only unnecessary element, in my opinion, is the team name; the small text combined with the presence of the logo renders it relatively pointless. 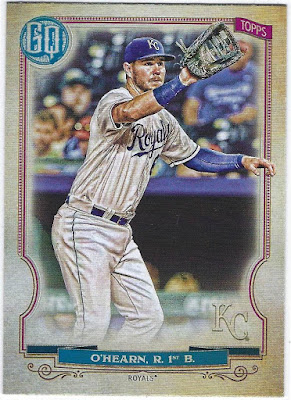 Admittedly, Ryan O'Hearn was somebody I was hoping I wouldn't have to run into now that the 2019 rookie class is in their 2nd season. His base cards and autographs, along with a few other players (Cedric Mullins), flooded last year's releases.

Hopefully, if nothing else, there will be a new crop of players to perform this task in 2020, so I'll at least be tired of new players rather than the same ones as last season. 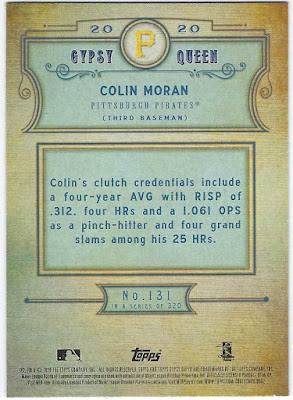 The card backs are incredibly similar to what we saw from Gypsy Queen a year ago but with one major improvement; the card numbers are actually legible, not like the small digits, that Topps forced us to read in 2019.

This time around, you can easily see, for example, that Colin Moran is #131 in a set of 320 cards, but last year, the text was unnecessarily small. Even though the backs don't differ that much from one another, I applaud Topps so much for the change they made that I'm willing to look past it. 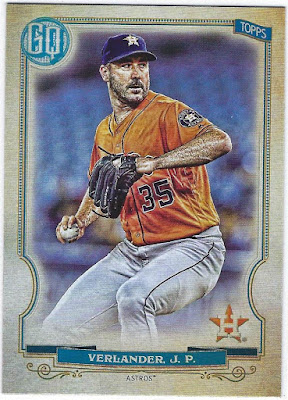 Nice player collection addition here, though I must say I'm not particularly stoked to acquire new Astros cards these days. 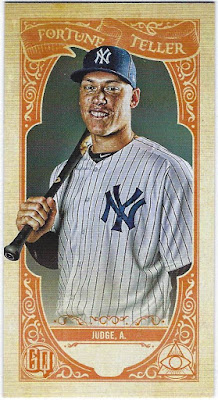 Since a massive overhaul was done on the set in 2017, a lot has changed surrounding the Gypsy Queen product. One of the constants through all of the shifts, however, has been the Fortune Teller minis.

The back of each card predicts with the particular player will achieve in the subsequent year. In this case, the "fortune teller" envisions that Yankees outfielder Aaron Judge will bounce back from 2 injury-plagued seasons by winning the AL Gold Glove and Silver Slugger. 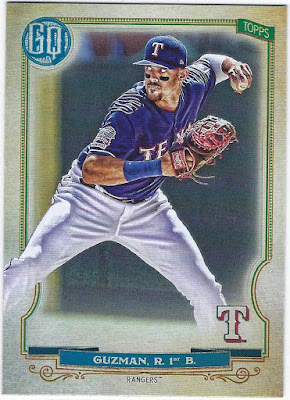 There's not a whole lot for me to say about Ronald Guzman as I'm not very familiar with him, though I do find it interesting that Topps chose to have his leg extend past the frame of the image. 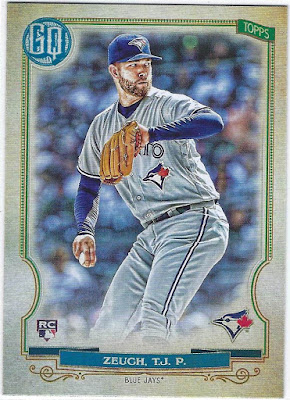 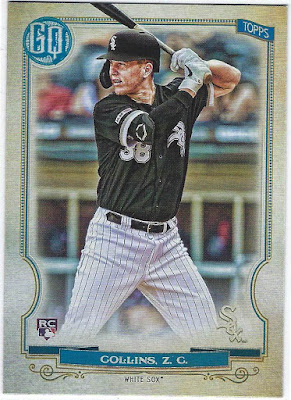 Not to be confused with Zach Collins of the Portland Trail Blazers, White Sox catcher Zack Collins is expected to be yet another key contributor to this resurging team in 2020.

Overall, though I certainly have to see more before comparing and contrasting the 2, there are a lot of similarities between 2019 and 2020 Gypsy Queen, and that's not necessarily a bad thing.

After all, Topps finally established an identity for the set last year after years of uncertainty, so now that they've got it down pat, I wouldn't mind another year of playing it safe before taking another risk.
Posted by Henry Blanchette at 9:00 PM