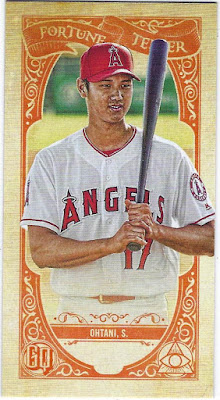 My last blog post, which was far too long ago if you ask me, was a 1-pack preview of 2020 Topps Gypsy Queen that provided a brief insight into this year's release.

As I mentioned then, the pack was the first out of a hobby box that I ordered as a type of comfort during these times of uncertainty. With everything that's going on in the world with coronavirus, sometimes a box of Baseball cards is exactly what you need to take your mind off things for a bit.

I spent the next couple of days opening packs and making my way through the box. New releases, no matter the product, always have a sense of excitement surrounding them; this feeling is intensified when the set is one of your personal favorites.

Gypsy Queen has undergone numerous and frequent changes since its debut back in 2011. Some collectors don't deem it necessary considering that we have Allen & Ginter which comes out in July.

Admittedly, even I prefer A&G to Gypsy Queen, but Topps' reinventing of the latter over the past few years allows me to fully appreciate both sets for what they each offer. 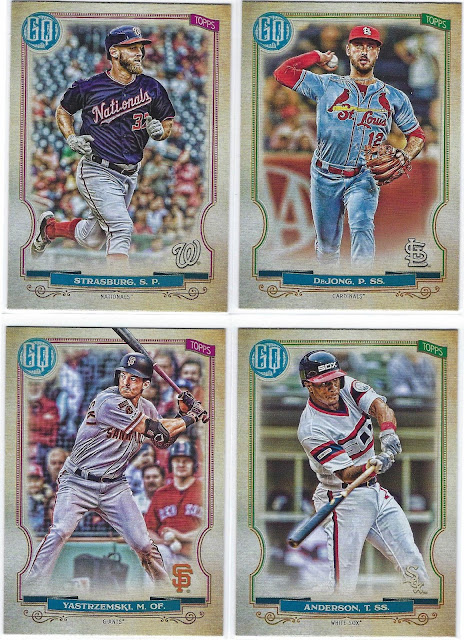 The base set features a grey/cream colored border similar to the 2016 and 2018 designs. In the past, I've criticized Gypsy Queen for utilizing the same shade over and over again. Take, for example, 2011, 2014, 2017, and 2019, all of which, more or less, features the exact same colored borders.

However, I will admit that this is one of Topps' better GQ base designs of all-time. Playing off last year's set, there's a banner with the player's name, a frame around the picture, and an overall similar set-up, only with a different color.

I chose to feature 4 particularly stellar base cards above. From a shot of Stephen Strasburg as a base runner to Mike Yastrzemski at the plate at Fenway Park, little details like these can propel a product to new heights. 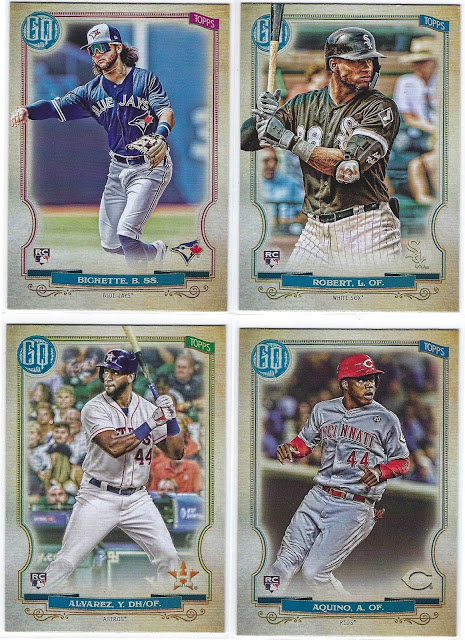 Between Series 1, Heritage, and now Gypsy Queen, I've definitely become familiar with the big-name rookies from this year's class, all of whose base cards appeared in my hobby box break.

Bichette, Alvarez, and Aquino all saw playing time in 2019 while Luis Robert is set to make his MLB debut in 2020, whenever (if at all) the season begins.

I know Topps wants to use him to make as much money as possible, but it still baffles me that Yordan Alvarez, who won AL Rookie of the Year with 313 at-bats in 2019, is just now being recognized as a rookie by Topps in the 2020 season. 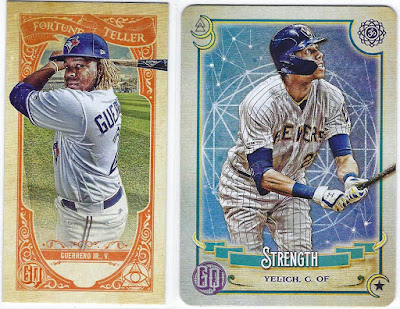 The Fortune Teller "minis" (in reality, they're tallboys) have been around since 2017 while the Tarot of the Diamond cards made their debut the following year in 2018.

While orange wouldn't have been my first choice for Fortune Teller (I would've gone with a crimson color instead), the tarot cards look better than I've ever seen them look before. I particularly like how they have a slight modern influence while staying true to the concept.

These are the only 2 inserts in the product, highlighting that Gypsy Queen is more reliant on variations and parallels. Truth be told, there's no real need for another insert set, as it would prove challenging to find another concept so applicable to the GQ brand. 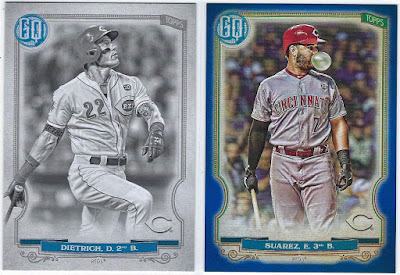 A Cincinnati Reds fan would be pretty pleased with the results of this box given that I landed not 1, but 2 parallels featuring players from the up-and-coming team. First came a black and white parallel, #/50, of 2nd baseman Derek Dietrich.

Then, a blue (or indigo, I'm honestly not sure) parallel of 3rd baseman and slugger Eugenio Suarez. I find it interesting, though Topps has done this for a few years, that the b&w parallels encompass the whole card, including the image. 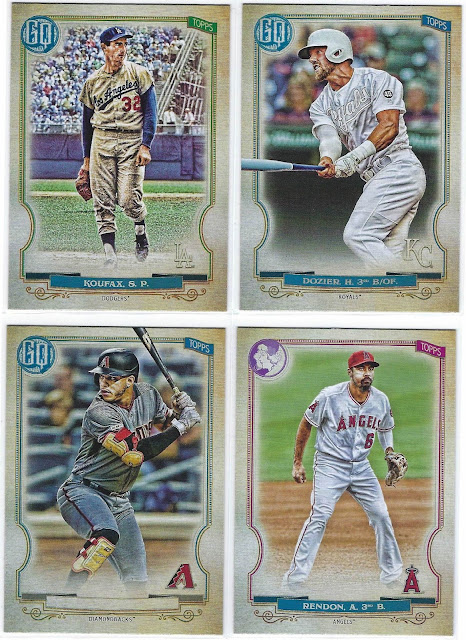 The main attraction of Gypsy Queen, as I mentioned before, are the variations and SPs, and it seems like you end up with a reasonable number of them per 24-pack hobby box.

First, the Sandy Koufax is a high-number SP (#301-320 in the base set), all of which are retired players. The Hunter Dozier, on the other hand, is a fairly rare player's weekend jersey variation. A subtle inclusion this year that can be hard to catch, they're not my favorite cards, but I don't mind them.

The Ketel Marte in the bottom lefthand corner is a variation I'm not too crazy about the missing nameplate variation, which has been around since the 2017 release. Last up, a GQ logo swap and my first card of Anthony Rendon as a member of the Los Angeles Angels.

The 2 cards of LA players are easily my favorites of all the variations and SPs that I pulled. 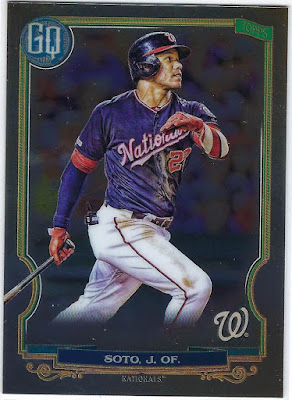 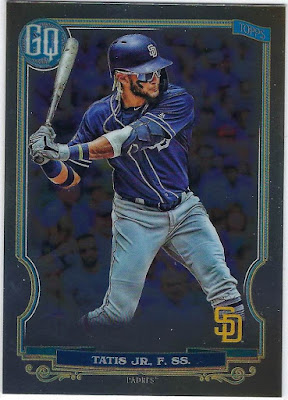 The chrome cards made their return to 2020 Gypsy Queen as a 3-card box-topper, and while I wish they'd be apart of the base set so that we could still have the oversized Glassworks toppers, I can't complain too much, especially because of the lineup of players I pulled.

Juan Soto has to be one of the hottest young players in the game at the moment while Fernando Tatis Jr is a guy I'm literally dying to watch once the 2020 MLB season gets underway. I started "super" collecting him last year, but it'll be a lot easier now that he's no longer a rookie. 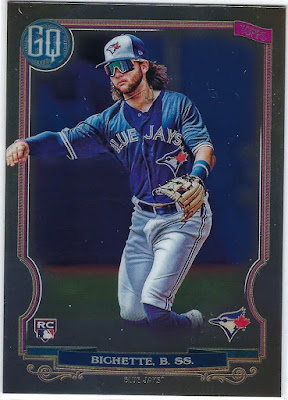 My final card was one of the previously mentioned top tier rookies from this year's class, Blue Jays shortstop Bo Bichette. The 22-year old's card is another one of my favorites from the base set, complete with an action pose and sunglasses.

There's also a chance for autographs and numbered refractors in the chrome pack and while I didn't land any this year, I pulled a blue Miguel Cabrera in 2019. 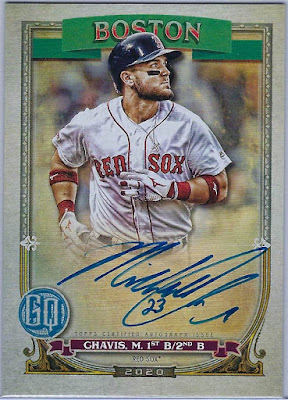 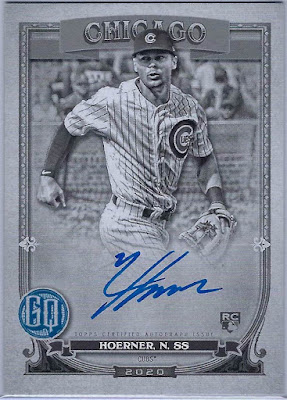 Each hobby box promises 2 on-card autographs, and I don't think I could've done any better in terms of teams. Never before have I landed hits exclusively from the Red Sox and Cubs, my #1 and #2 favorite teams in Baseball.

First up, Michael Chavis, who actually has a nice signature, and a player I'm excited to watch for years to come. He proved his power as soon as he made his MLB debut, and I see no reason why he can't become their 2nd baseman for the future, especially if he improves his contact hitting a little bit.

The Nico Hoerner autograph is another black and white parallel, numbered 48/50, and while I don't know a whole lot about him, I've heard his name being tossed around for a few years. Like Chavis for the Red Sox at 2nd, Hoerner could very well be the Cubs' shortstop for the foreseeable future.

And even if he doesn't live up to the hype, the combination of the blue ink with the black and white parallel is something special in and of itself.
Posted by Henry Blanchette at 3:44 PM

Email ThisBlogThis!Share to TwitterShare to FacebookShare to Pinterest
Labels: 2020 Topps Gypsy Queen, Tarot of the Diamond