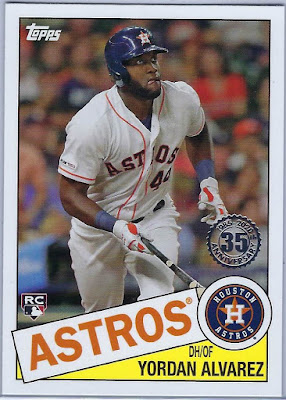 With Topps Heritage set to come out a week from this Wednesday, the 3 blasters I purchased of 2020 Topps Series 1 will likely be my only sampling of the product unless it's the only thing available at Target a few months from now when I have the itch to open packs.

Last year's Series 1 had virtually no big-name rookies and contained fewer inserts per pack, so I'm pleased with the adjustments that Topps has made to the set.

The addition of the Turkey Red inserts as well as including Alvarez, Bichette, and Lux, among other rookies, in the checklist only gives it a greater appeal.

In my previous post, I touched on a few specific aspects of the product (RC medallions, inserts, etc), I saved my best pulls for this post, one that'll include rookies as well as variations. 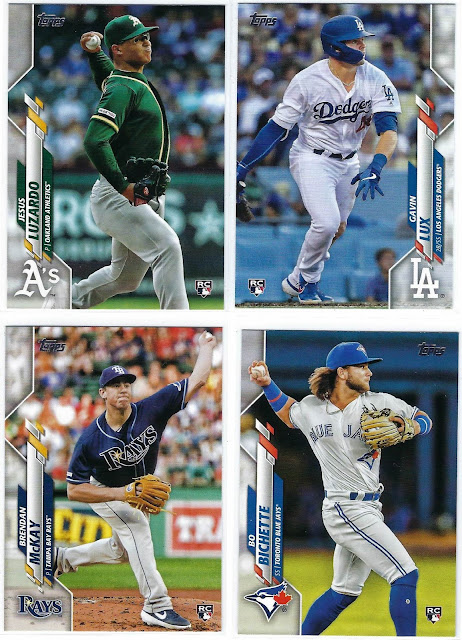 As far as the base checklist is concerned, I usually chase cards for my player collections as well as the major rookies, and there were a lot of them in 2020 Series 1.

Jesus Luzardo and Gavin Lux, although unbelievably talented, are players I know very little about. Brendan McKay and Bo Bichette, on the other hand, have been on my radar for a little longer thanks to the Bowman mega boxes as well as Bowman's Best. 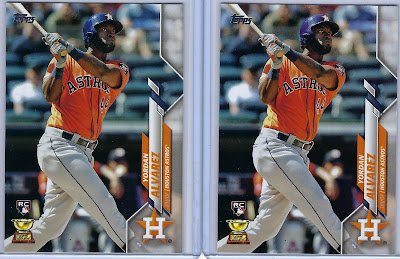 The main draw to this year's Series 1, however, is Yordan Alvarez, the Astros' power-hitting phenom with both an RC logo and an All-Star rookie cup on his 2020 Topps Flagship card.

In the first 2 blasters that I opened, both of which were purchased at Target, I landed 2 Alvarez base rookies, as well as the '85, insert at the top of this post.

Whereas I usually don't start collecting a player's cards until their second full season, I think I'll make an exception for Alvarez who hit 27 homers in 313 at-bats last year. 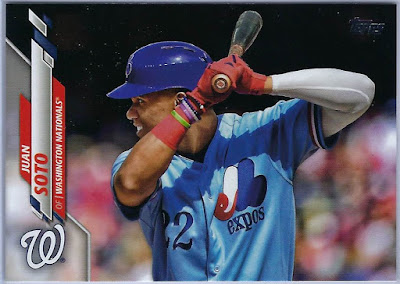 The Juan Soto image variation above breaks the pattern of featuring only rookie cards in this post, but it's just such an interesting pull that I couldn't help but show it off.

Following his World Series victory, Soto's stock is, arguably, higher than it's ever been before. I'm not sure how I feel about Washington Nationals players wearing Montreal Expos jerseys, but I will say that it's a cool thing for Topps to have captured on cardboard.

Plus, the angle complements the jersey and helmet very well, as weird as it may be to see the Nationals' team logo so close to that of the Expos. 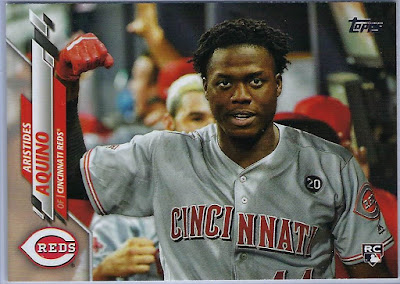 The Soto SP may be the most interesting card of the break, but this Aristides Aquino SP, another image variation, carries the most value. Anything with an RC logo can attract some interest, so I might end up selling it on eBay.

Regardless, Aquino is yet another highly-desired rookie from this year's class featured in Series 1. I actually prefer his base rookie with the throwback uniform, but the image variation is definitely my best pull from the 3 blasters.

Aquino hit 19 homers in just 205 at-bats last season, so, like Alvarez, he's a young, power hitter to watch in 2020. If I hold onto this card, I'll definitely watch him a bit more closely.
Posted by Henry Blanchette at 8:59 PM