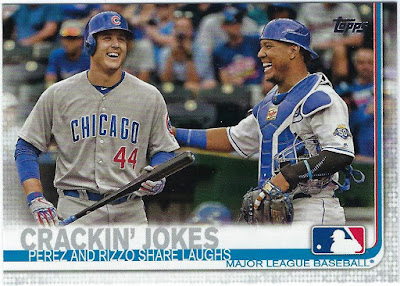 Now that I've finished sorting the cards from my hobby box of 2019 Topps, I can move onto a very interesting aspect of card collecting; the numbers behind the cards.

Whenever I open Baseball cards, whether it's as small as a value pack or as large as a hobby box, I instantly take notice of how many cards I pull from each team.

There's always been an element of the numbers that has intrigued me. What causes us collector's to inevitably pull dozens of cards of teams we don't care about only to miss out on the team that we collect?

With all that being said, I haven't really done an extensive count like this when opening an entire box of cards, so I decided to change it up with the release of 2019 Topps Series 1. After all the cards were pulled, I began sorting them into piles by their respective team and taking count of how many cards I pulled from each team, including base cards, parallels, inserts, and more.

For comparison's sake, I also took notice of the number of parallels, inserts, and cards of players I collect just to see how well I truly did with my hobby box of 2019 Topps Series 1.

I'll go down the list of all 30 teams, beginning with the 4 clubs tied for the #1 spot. 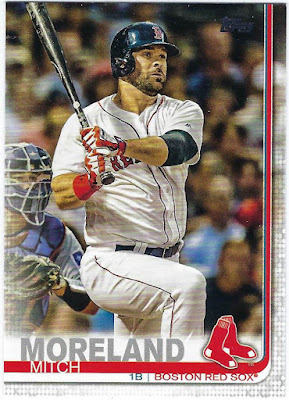 No gigantic surprise here, but nevertheless, it's awesome to have my favorite team at the top of the list, something that doesn't always happen for me. Mookie Betts' league leaders cards and the recent success of the team likely caused there to be so many Sox players on the checklist.

Granted, the World Series cards do help, since, without the 3 that I pulled, the Red Sox would fall a few spaces down on the list. 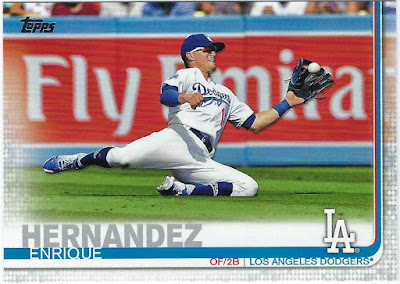 Another result that wasn't too surprising since the Dodgers were right up there with the Red Sox in the World Series last year and have enjoyed immense success with their 6 straight division titles. The results have made sense so far, for the best 2 teams in Baseball should have the most cards in a given set. 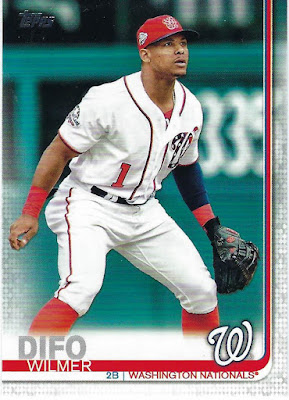 The 3rd team with 15 cards was definitely the most surprising of the 4 teams on top. After all, the Nationals didn't even make the playoffs last year and didn't have any league leaders cards besides Max Scherzer or a ballpark card that I pulled, for that matter. I suppose there's no reason for this other than the fact that Topps threw a ton of Nats players into the Series 1 set.

All 3 of those teams are clubs I'd expect to see near the top, though it is a little surprising to see the Angels all the way at the top given that I pulled 1 Trout and 3 Ohtani's, leaving 11 spots for other, lesser-known Angels players. 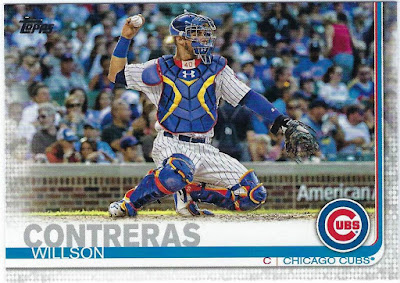 Topps seems to be constantly jumping from team to team, creating a ton of cards from that particular team throughout that time frame. For example, 2016 and 2017 saw an unbelievable number of Cubs cards being produced. Now, it appears Topps has moved back to the Yankees who are, once again, one of the best teams in Baseball. 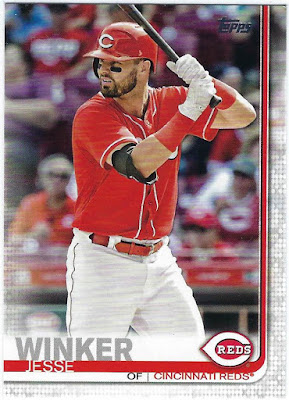 It's definitely surprising to see the Atlanta Braves down so far on the list, especially since they have the same number of cards as some teams who placed 4th or 5th in their respective divisions last year, including the Baltimore Orioles and Cincinnati Reds.

You'd think, as division champions, that I would end up with more Braves cards than I did.

With nearly 1/3 of MLB teams falling at the 10-card mark for my hobby box break, I'd say 10 would be the average number of cards pulled for each MLB team.

The 9 teams that ended up with 10 total cards are somewhat expected, middle of the road clubs who typically receive an average amount of spots in set checklists. 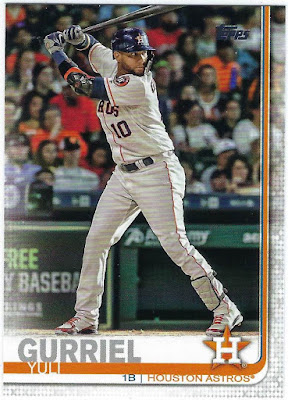 At first, when I only counted 9 Houston Astros cards, I had to double-check to make certain that I didn't miss any cards. When the count was confirmed, I was and still am incredibly shocked. Even with Alex Bregman being in Series 2, it seems almost impossible to end up with only 9 cards of the 103-win Astros in a hobby box break. 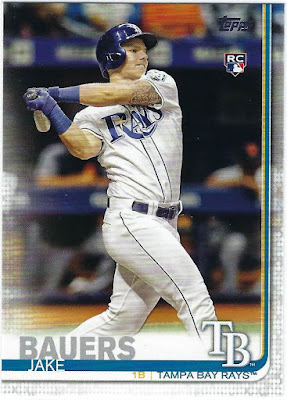 This is what I'm talking about. I ended up with the same number of Astros cards as Tampa Bay Rays cards and that's a stat I'm not used to hearing whatsoever. Albeit, Blake Snell's monster 2018 season helped the Rays by providing me with 2-3 cards of the 2018 AL Cy Young award winner. 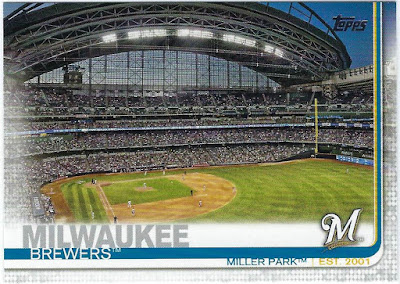 Wait, I thought winning the NL Central in 2018 would mean bigger things for the Milwaukee Brewers instead of leaving me with just 7 cards in a hobby box break that delivered well over 300 total cards.

I pulled 2 cards of the 2018 NL MVP, Christian Yelich, and that still didn't stop the Brewers from being tied for dead last on my list.

And just in case you couldn't remember what team I've yet to mention, here's the club tied with the Brewers for spot #30. 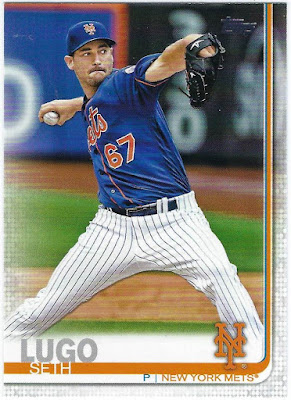 Keep in mind, 2 of the 7 Mets cards that I pulled feature their immensely talented ace, Jacob deGrom. 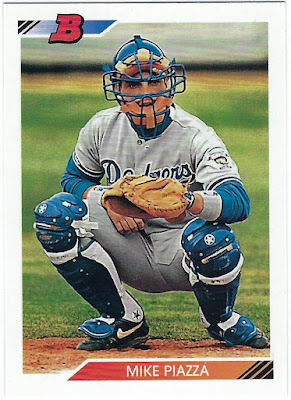 There certainly aren't as many inserts as there have been in years past, but I'm someone who happens to prefer quality over quantity. If this years' insert cards happen to be an improvement over last year, which I believe they have been then I'm okay with pulling fewer insert cards compared to what I have pulled in the past. 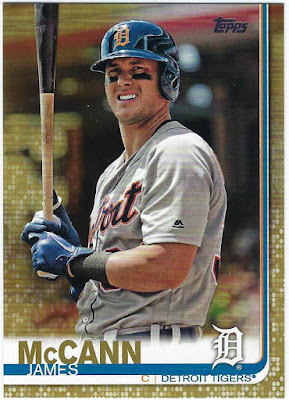 While I didn't get as lucky as I would've liked with insert cards, I had some excellent luck with how many parallels I pulled, 14 of them, to be exact. Continuing with this post's theme of numbers, that's 1 parallel card for not even 2 total packs. 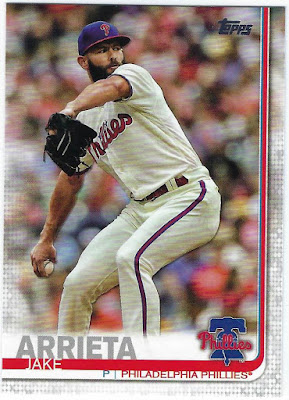 And if there was any doubt that I wouldn't come up with many cards of players I collect, my hobby box netted over 50 cards for my player collections, consisting of both past and present players. Nearly 1/5 cards I pulled was a guy that I collect, and I'd consider that fairly impressive.

At least, as far as numbers go.
Posted by Henry Blanchette at 6:00 PM