In what has started to become a Christmas day tradition, my Dad and I opened up a box of 2018 Bowman's Best yesterday after it was released last Friday, a mere 4 days before Christmas day.

Last year was the first time I had ever opened Bowman's Best when we grabbed a box of the 2017 set. It was a totally different experience than any other box of cards I had ever opened before. I'm not used to this high-end of a set, so I didn't fully know what to expect. I did fairly well last year, but nothing too special. This time, I was looking to step it up. 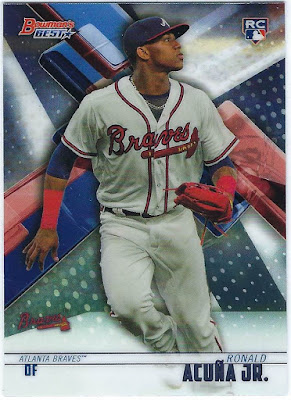 When I opened the box yesterday, I had a much better idea on what to expect than I did the year before. Not only did I know how the mini boxes worked with 2 autos per mini box and 2 boxes in the master box, but I had also seen the set design in breaks on YouTube as well.

As always, there's a definite modern approach to the set with a silver, sleek design and some color in the background as well. Last years' cards were definitely more colorful, but that also made the numbered refractors less special. Therefore, I must say that I'm more fond of the 2018 product. 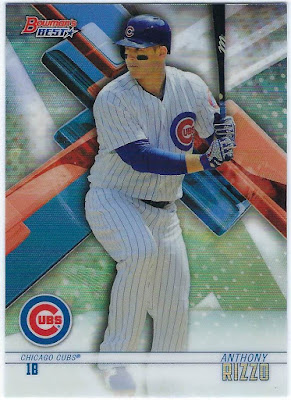 The 5th card of each 5-card pack is guaranteed to be a refractor of either a prospect or rookie/veteran. The rookies and vets take up around 75 spots in the checklist while there are roughly 30 prospects. This means that you don't have to be super knowledgeable on prospects to appreciate the set since most of the base set consists of current MLB players. 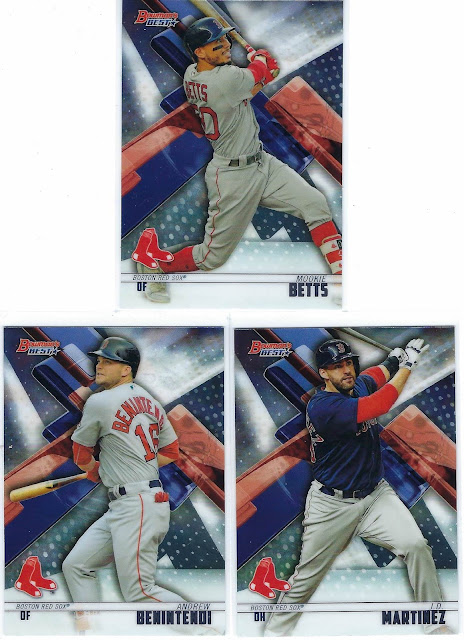 I always have to take note of how many Red Sox cards I'm able to pull from any box break, and Bowman's Best delivered some pretty nice cards. I may not have pulled a much-desired Craig Kimbrel, but base cards of Betts, Benintendi, and J.D. Martinez came my way along with some inserts that I'll show off later on. Unlike 2017 where the player name was moved to the other side of the card, this years' Bowman's Best prospect cards look vastly different when compared to the veteran and rookie base set.

The background is still ultra-modern but in a more colorful and detailed way. There's far less separating the player name from the rest of the card, and as a whole, the prospect cards are different yet similar to the base cards at the same time, a very good trait in my opinion. 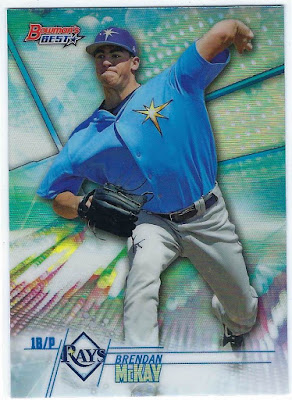 The 1 refractor card per pack can also be a prospect instead of a rookie/veteran, but they're a bit less common due to there being just 30 prospect base cards. However, the smaller checklist nor my limited knowledge of prospects would stop me from pulling a couple standout prospect refractors. The first is the Brendan McKay card above, a top pick from last years' draft, while the 2nd is at the top of this post; Vladimir Guerrero Jr. 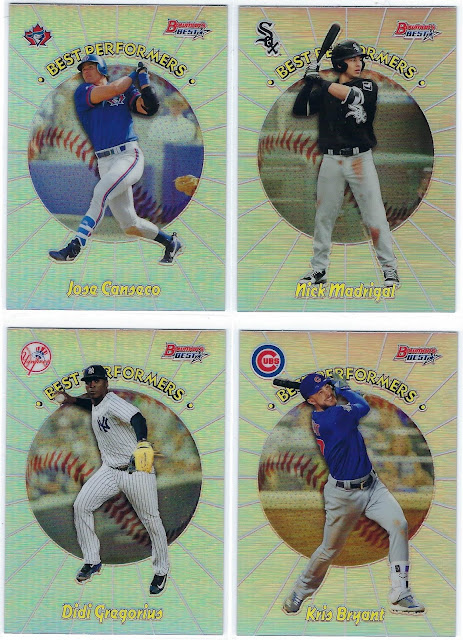 In yet another way that this years' Bowman's Best set is similar to last years', the 2018 product features an insert set that pays homage to an insert set in a past Bowman's Best product. Last year, they recreated the '97 Best Cuts cards, but this year, they went with the '98 Best Performers which can also be autographed, the case hit of this product.

There was a wide range of players that I pulled with 1 retired, 2 current stars, and 1 prospect. Of the 4, both the Jose Canseco and the Didi Gregorius are available for trade. 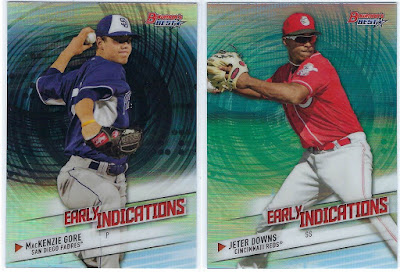 Early Indications is a pretty standard prospect insert set, indicating that the players within the checklist have the ability to become stars in the coming years. It's nothing to write home about, but I was able to pull a couple well-respected prospects; the #3 pick in the 2017 MLB Draft, MacKenzie Gore, and one of the prospects traded to the Dodgers for Puig and Kemp, Jeter Downs. 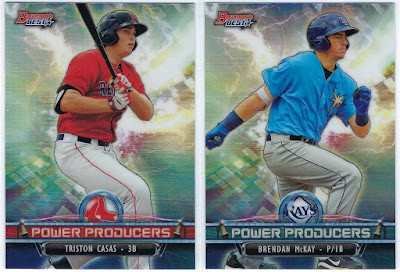 As far as the insert set designs go, the Power Producers would have to be my favorite of the bunch. I'm not sure if the set is limited to just prospects, but the 2 guys that I pulled are both minor leaguers. First up is another Red Sox, 3rd baseman Triston Casas while on the right, we have 2-way talent Brendan McKay who is seen hitting this time due to the set being called Power Producers. 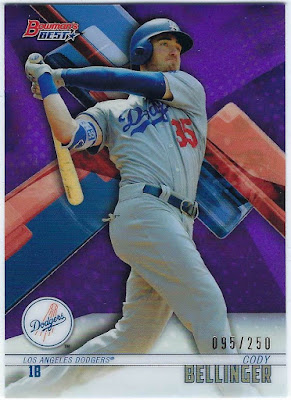 I haven't seen any other colored refractors from the set in-person besides purple, but I have no doubt they look fantastic. As of now, I plan on adding this to my Cody Bellinger player collection, but my mind could be changed by the right trade offer. Each box guarantees you 1 atomic refractor base card of either a prospect or a veteran/rookie, and I don't think I could've done any better than Mike Trout with the possible exception of Shohei Ohtani and Ronald Acuña Jr. Trout's been a top 3 player in Baseball for years now, spending a good deal of time arguably at the #1 spot. He's the face of the game, and I know this card will be a fabulous addition to my Trout player collection.

So you've seen insert cards and the atomic refractor, but the luck didn't end there. In fact, the 2 previously mentioned cards combined and the result was nothing short of stunning. 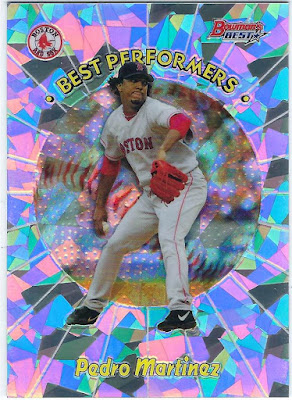 Falling at 2 per 8-box case, the 1998 Best Performers atomic refractors look absolutely breathtaking, both in-person and when scanned. I haven't taken an in-depth look at the checklist, but it's hard to find for me to find a player I'd rather have in this design than Pedro Martinez. Usually, I'm not too crazy about insert parallels since I see them as a way for Topps to make more money, but for these, I'll make an exception. 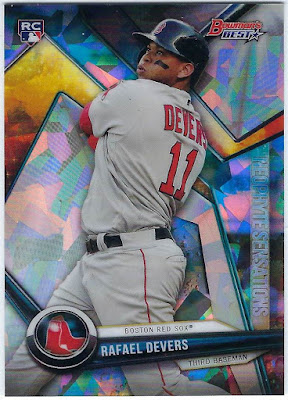 I'm also willing to make an exception for the Neophyte Sensations card as well after pulling my 2nd atomic insert refractor of a Red Sox player. This time around, it's Rafael Devers, representing the Red Sox in this rookie-based insert set.

As far as I know, the odds of pulling an atomic refractor from this insert set is extremely low, since one can't even expect a regular insert card from this set in a hobby box (the odds are 1:18 packs, and you get 12 packs per box).

However, despite the seemingly endless possibilities for inserts and refractors, the main draw to Bowman's Best is the 4 guaranteed on-card autographs per box. Last year, the best autos pulled were Blake Rutherford and a Jake Burger refractor. Let's see how I do this time around. 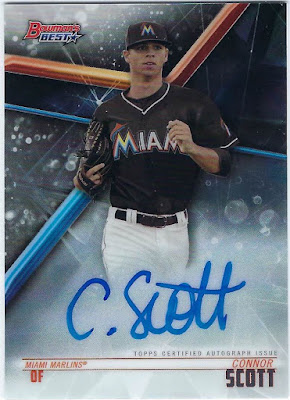 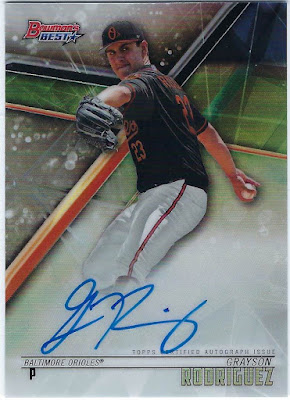 The first of the 2 mini boxes didn't deliver the biggest names, but I could've done worse. The Connor Scott card has its perks because he's a position player while the Grayson Rodriguez is at least a refractor and not a base auto. As always, the blue sharpie used for on-card chrome autographs looks fantastic, though it wasn't the best start to the box as far as autographs go.

After that, the bar was raised, big time. 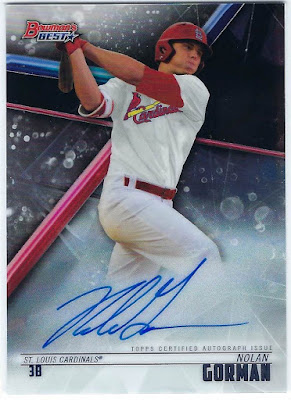 At first, I didn't think too much about pulling a Nolan Gorman autograph but that would quickly change. As it turns out, Gorman is #73 on the MLB top 100 prospects list, and his base autograph is going for a pretty decent total on eBay, especially for a non-numbered autograph. I even saw that he was included in the Power Producers insert set, proving that he's pretty relevant and has a decent chance to develop well given how stable of an organization the Cardinals are.

As always, I've saved the best for last, an autograph of a player that even with my minimal knowledge of cards, I instantly recognize the name. Here it is, the crown jewel of the entire box. 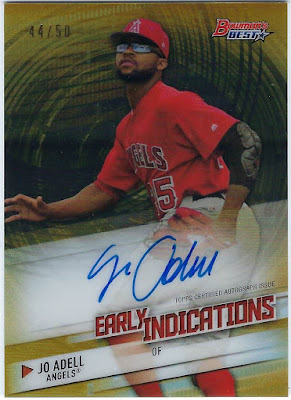 Wow, I can definitely say I wasn't expecting that. Instantly becoming the best autograph I've ever pulled of a prospect, this hit was nothing short of huge, even if Adell's journey through the minors has barely hit AA. He's the #15 prospect on the top 100 list, and he was drafted at #10 in the 2017 MLB Draft.

Furthermore, this is an insert autograph parallel from Early Indications, the insert set for some of the best prospects in the minors. It's a gold parallel numbered 44/50, so needless to say, it's a pretty difficult card to pull due to how increasingly rare insert sets have become.

While I know a bit about him, my knowledge of prospects, their autographs, and value aren't too strong, so I'm not sure what this card is worth since I haven't seen another for sale yet on eBay or any other site. Therefore, any tips on the value of this card, information about Jo Adell, or prospect autos, in general, is greatly appreciated.

I hope you all had a joyful holiday and a happy New Year as well.
Posted by Henry Blanchette at 11:53 AM