My World Series Set Has Arrived 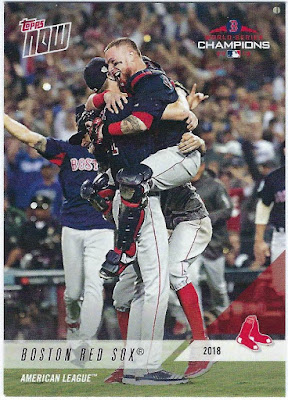 After nearly 2 months of waiting, my Red Sox World Series set from Topps NOW finally arrived in the mail today, providing me with a belated holiday gift that I've been anticipating since the Sox took home the World Series title 2 months ago to this day.

The day after the Fall Classic was won, I claimed one of the exclusive 20-card sets from Topps that includes a bonus autograph of 1 player out of a list of about 10. In addition to the base form of the autographs, there are parallels as well, though I'm not sure what colors or numberings they have.

Considering it took Topps 2 months to deliver the set, I expected top-quality cards with the same cardstock that we've become accustomed to in the Topps NOW brand. That includes the smooth and spotless front with the Topps holo logo on the back in addition to the higher-quality cardstock used for the online-exclusive set.

When I opened up the set, I'm pleased to say that the quality of cards lived up to my standards. What I found in the box was an impressive stack of cards made to look just like regular Topps NOW cards. Only this time, it's a full set commemorating the 2018 World Champion Boston Red Sox.

The 1st card of the set is at the top of the post, featuring the now iconic image of Chris Sale and Christian Vazquez celebrating the World Series win with David Price being the next one to the mound. This card serves to commence the rest of the set which includes individual cards for the major contributors to the historic team. 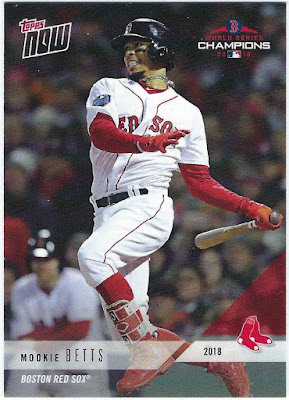 It makes sense for Mookie Betts to be the first player included in the set after the team card at spot #1. Even before the playoffs began, it seemed fairly certain that Mookie would take home the AL MVP award. Immediately, I took notice that every picture included in the set was taken at one of the World Series games, a detail I certainly appreciate. 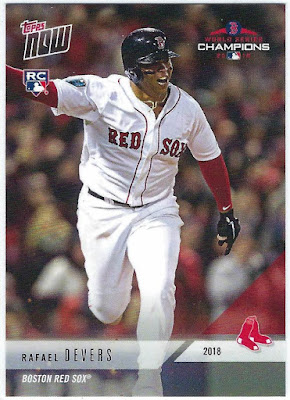 Another Rafael Devers rookie card is now mine thanks to the exclusive World Series set. He may have dealt with injuries and not been as consistent in 2018 as he would've liked, but Devers remained a key member of the championship-winning team from start to finish. At the age of 21, he's already a World Series champion. 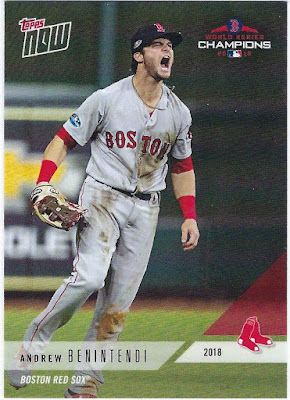 Though I've purchased a couple Topps NOW cards in 2018, I have yet to comment on the set design since the product is less about design and more about the event or moment it's commemorating. The set is fairly basic with nothing too special going on. I would like a bit more of an interesting set for 2019 Topps NOW, but the issue is far from pressing. 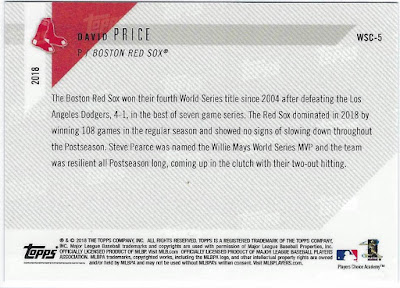 One of the things that excited me the most about this set when I ordered it was knowing that each card would have a little blurb of information about each player and his role on the World Series team. I was eager to see what Topps has to say about key performers in the series such as David Price and Steve Pearce. 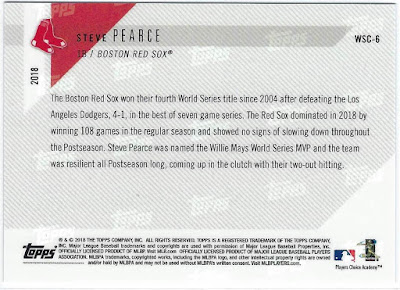 However, I quickly learned that this was not the case but, in fact, every card had the same exact text on the card back, a quick recap of the World Series in just 3 sentences. I won't lie, I was very disappointed by Topps' decision not to go more in-depth with the product.

While it's not a big enough reason for me to dislike the set, you'd think there would be unique writing on each card because of the price of this set and other Topps NOW products. 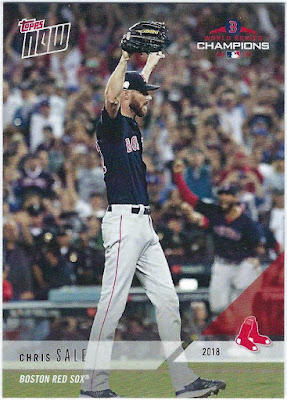 With that being said, I can't be too upset about Topps decision, for there's nothing I can do now anyway. As soon as I noticed the repetition on the card backs, I glanced at this Chris Sale card taken right when the Red Sox sealed their Fall Classic victory.

Suddenly, I have zero room to complain about card backs. 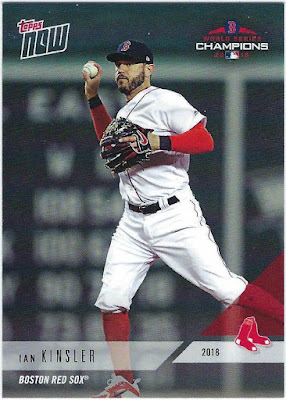 The trade deadline acquisition of Ian Kinsler back in late July didn't really make much sense given the plethora of utility infielders like Brock Holt and Eduardo Nunez. It seemed a given that Kinsler would go elsewhere in the offseason, and that's exactly what he did when he signed with the San Diego Padres for 2 years and $8 million dollars. 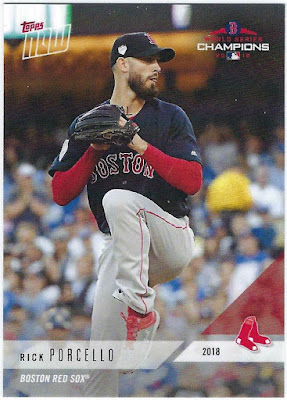 30-year old Rick Porcello will be entering the final season of his contract in 2019, and Boston will have to decide whether or not to bring him back. It's uncertain what he'll be asking for, but despite his inconsistencies, he's been a solid starter in the rotation and even a Cy Young award winner with the Red Sox. It would be wise to resign Porcello after the 2019 season. 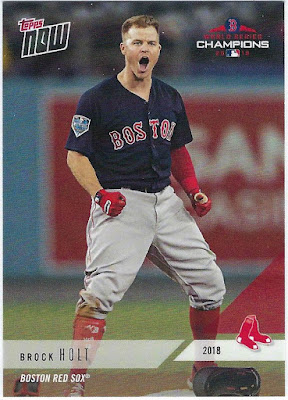 Brock Holt, unbelievably, hit the 1st ever postseason cycle in MLB history in the ALDS against the Yankees, certifying him as a postseason hero for the Red Sox on route to their World Series title. Even with Dustin Pedroia expected to be healthy and Eduardo Nunez returning in 2019, I expect "Brockstar" to retain his role as the super utility player that he is. 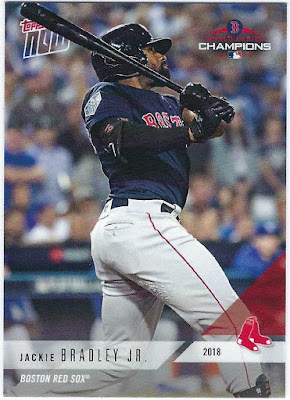 After the Red Sox took home the World Series title, it became clear that maintaining their championship-winning roster for years to come would be difficult with players like Chris Sale and Mookie Betts hitting free agency in the coming years.

Another key talent who the Sox will have to lock up sooner rather than later is their Gold Glove centerfielder Jackie Bradley Jr. who has 2 years of arbitration before becoming an unrestricted free agent after the 2020 season. 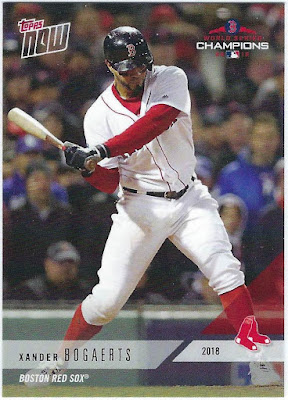 After setting career highs in doubles, home runs, and RBI in the 2018 season, Xander Bogaerts proved that he can be an All-Star caliber shortstop for years to come. I've always thought of him as an underrated defensive player, and I wouldn't be shocked to see him win a Gold Glove or 2 at some point in his career. 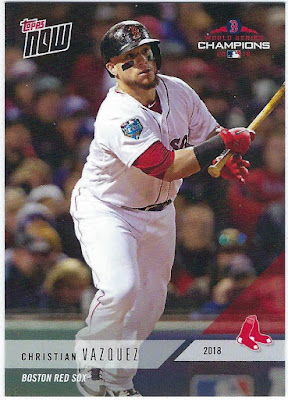 The catching situation for the Red Sox is my only major concern going into the 2019 season. A trade for Blake Swihart seems inevitable and frankly should've happened years ago when his stock was higher and they could've gotten more for him. Both Sandy Leon and Christian Vazquez struggled in 2018, but I have slightly more hope in the latter if he can stay healthy and solid defensively. 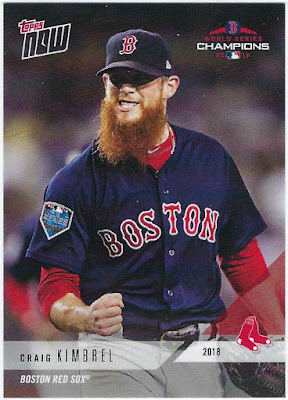 Don't be too shocked to see Craig Kimbrel return to the Boston Red Sox if the 2 sides are willing to compromise on the contract length and of course, the money that the 7-time All-Star will receive. Kimbrel had a legendary 2017 season with the Red Sox and has proven to be formidable. Even if he has his share of struggles, he's easily one of the best relievers in all of Baseball and someone who Boston needs to return. 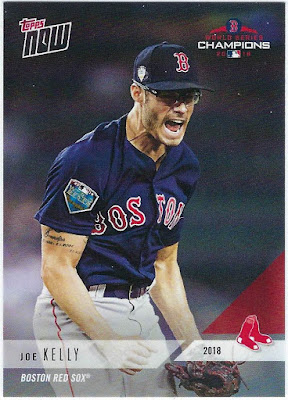 He may have already signed with the Dodgers, but Joe Kelly will forever be a Red Sox fan favorite, especially after his fight with Yankees infielder Tyler Austin. I fondly remember being at that memorable game when Austin and Kelly began a benches-clearing brawl between the 2 clubs. In addition to his presence in the clubhouse, Kelly's departure leaves a major void in the bullpen. 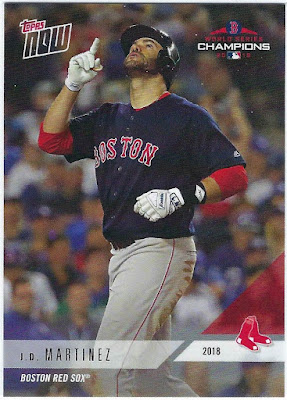 With 1 player and a couple other cards yet to come in the set, I'd like to point out how well Topps did in terms of choosing the right players to be included in the set. Each player included in the set contributed heavily, in the World Series especially, to the success and World Series title that the Red Sox obtained this year. Seriously, hats off to Topps for the job that they did. 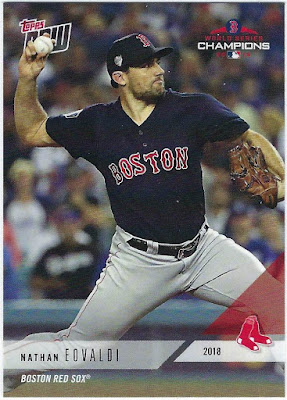 Eovaldi was quickly resigned to a 4-year deal worth just north of $65 million dollars, and I could not be more stoked about it. The trade that Dombrowski made for him at the deadline was one of the smartest trade deadlines trades in Baseball over the last decade along with Aroldis Chapman to the Cubs in 2016. 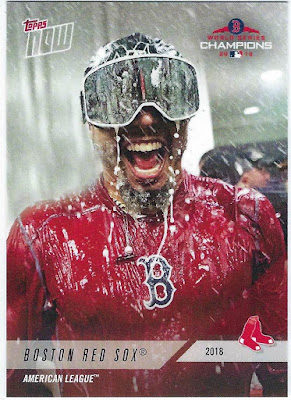 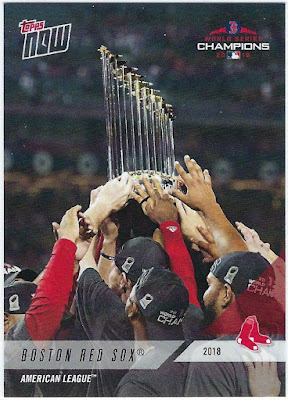 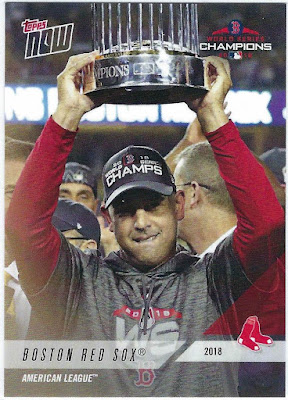 The final 3 cards of the set are celebrating cards taken a short time after the World Series came to an end. The cards include a nice variety of images, from Mookie Betts celebrating with champagne showering over him to rookie manager Alex Cora holding up the Commissioner's trophy after the Red Sox were officially crowned the champions of Baseball for 2018.

Wow, that sure is a lot, but I'm not quite done yet. I previously mentioned that 1 autograph from a member of the World Series team would be included with this purchase. Without any further adieu, here's who I pulled. 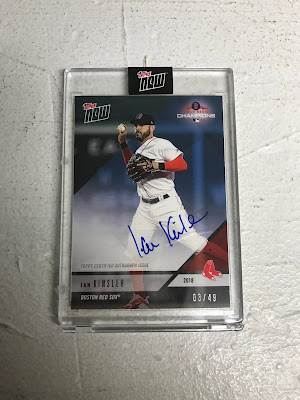 I have to say, Ian Kinsler would've been my last choice out of everyone on the checklist simply because he wasn't as much of a key contributor to the teams' success as opposed to everyone else. With that being said, I'm a big fan of the way the card is presented, incased with the Topps NOW sticker at the top. Similar to the card backs, it's not something that's going to ruin the whole set for me.

Plus, the card is a blue parallel numbered 3/49, a nice surprise because of how little I know about the set and all the parallels within it. Kinsler may not have been my first choice, but the low numbering and the way the card is packaged makes up for it in some way or another.

Now that I have this set in-hand, it's about time to look ahead to the 2019 season and what that will bring. It's incredibly difficult to win a World Series, but repeating hasn't even happened since the Yankees 3-peated from 1998-2000.

With the entire 2018 calendar year almost done, it's about time to see what 2019 will bring, for Baseball and beyond.
Posted by Henry Blanchette at 4:14 PM