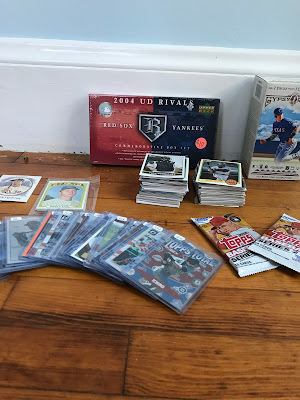 Much to our chagrin, my dad and I discovered early Sunday morning that there would be no card show that day. We were instantly very disappointed, but we were determined to acquire new cards that day. So I looked up card shops near where I live and found one that was about a 30-minute drive away. We decided it was worth it and headed over there.

As you can see there is a lot of cards in the first picture, so I can't include it all on one page. Instead, I will be dividing this up into about 4 parts that I will be posting throughout the week. 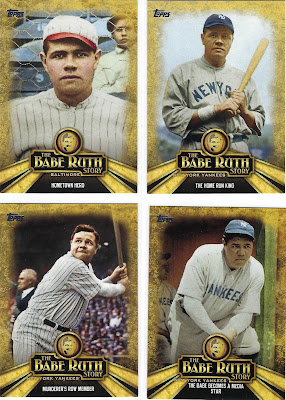 When I first walked into the store I was very impressed. There were organized walls full of packs as well as display cases that housed both old retail and hobby boxes. There were shelves that held binders full of singles from 60's and 70's sets, and other shelves with bobbleheads and pennants.

I didn't know where to start, but then I saw exactly what I wanted to see at a place like this.

I immediately sat down in the chair and began fishing through the rows of dime cards hoping for some great cards of players I collect. As you will see from these pictures, I found exactly what I was looking for. 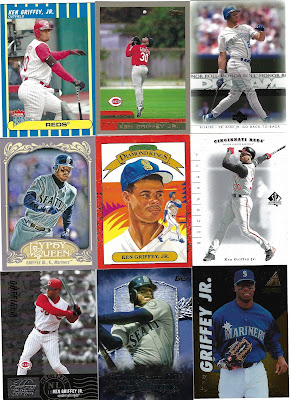 We start out with a player of whom there were a plethora of dime cards of, Ken Griffey Jr. It seemed like every stack of cards I picked up would have a card of Griffey in it. And for a dime, I had to pick up these 9 cards of him. 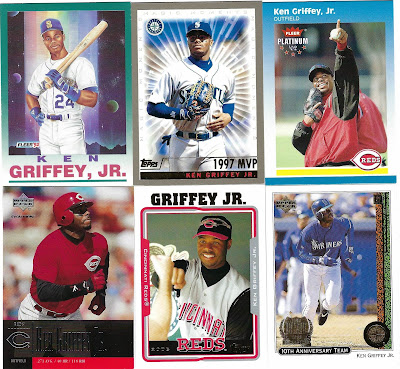 Plus these 6 more for a grand total of 15 new Ken Griffey Jr cards. Last time I counted my total cards I have of him it was around 80, so these 15 new ones mean I'm within striking distance of acquiring my 100th card of perhaps one of the greatest hitters in baseball history.

Besides Griffey, there was another player whose cards in these dime bins were plentiful. 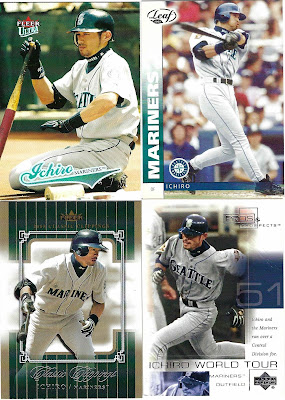 Ichiro. I added 4 more cards of Ichiro from his earliest and prime years in the MLB. There were quite a few nice ones in here, including the 2005 Fleer Classic Clippings in the bottom left that I definitely consider one of my favorite cards of Ichiro, maybe even worthy of a top 5 if I were to update my current top 5 Ichiro cards list.

In between picking out high totals of Ichiro and Griffey Jr. cards, I found some other cards of players I collect that helped me grow to like this card shop more and more. 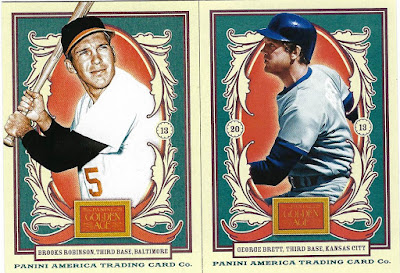 Like these 2013 Panini Golden Age cards of Brooks Robinson and George Brett. These are the first 2013 Golden Age cards I've ever got and I have to say I really like them. Between the frames and the bright reddish-orange and teal color combination, it almost has the feel of a set somewhere in-between Gypsy Queen and Allen & Ginter. It's a pretty nice set, especially considering it's unlicensed. 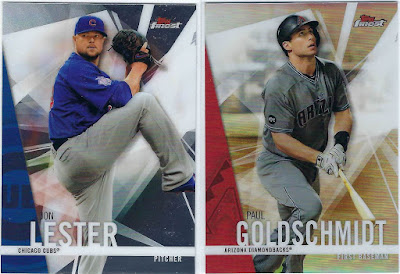 There were even cards from this year's high-end brands like Topps Finest. I've seen Finest in dime bins for a few months now which is something perplexing considering how expensive it can be. However, it gives me the chance to obtain cards of a high-end product that I wouldn't be able to get any other way so I'm not complaining. 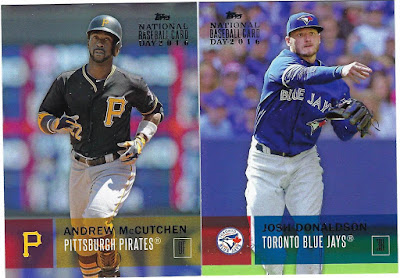 Another big treat in these stellar dime bins are cards from 2016 National Baseball Card Day. Since I didn't know this event was happening in 2016 I was unable to take part in it. Therefore I only had 2 cards from the set going into Sunday, so these McCutchen and Donaldson cards were able to double my grand total from the set.

Then I moved on to some "oddball" products, including some I never had any of until Sunday. 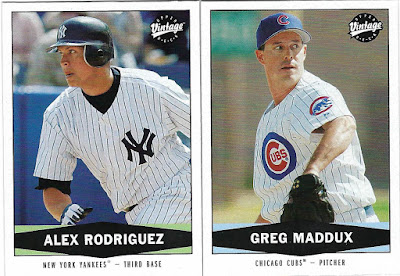 For example, 2004 Upper Deck Vintage. The "Vintage" brand was created to give Upper Deck a set theme that was similar to Topps Heritage. An older, retro design. However, Upper Deck never made vintage cards considering it began producing products in 1989, so I never fully got behind the set name. 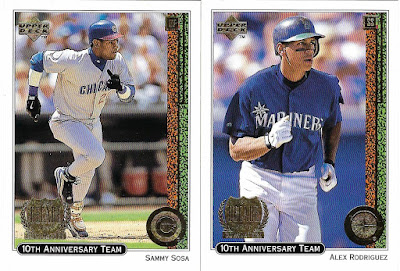 Their 1999 10th Anniversary set was something that I understood and enjoyed much more. It's similar to their iconic 1989 premiere set but adds a splash of gold along with a Decade of Upper Deck logo in the bottom left. 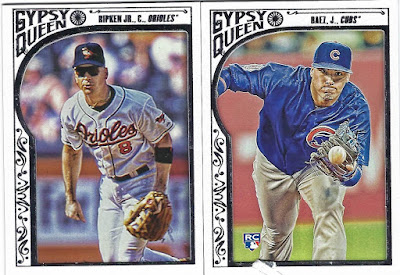 Yes the Ripken is a bit miss-cut (hard to believe a 2015 card still had that happen) and yes I don't collect Javier Baez, but these 2015 Gypsy Queen white-framed cards were too great of cards and at too good of a deal to pass up. Seriously though Topps get it together. There shouldn't be miss-cut cards anymore. 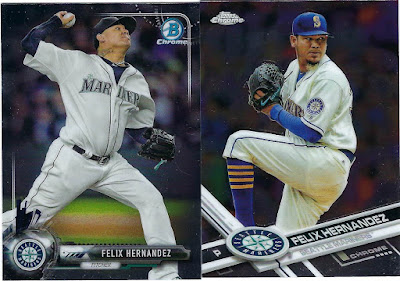 After finding some wild new cards, I narrowed my focus a bit more and back to players I actively collect. Like Felix Hernandez who was one of two players that I picked up 2 2017 chrome cards. 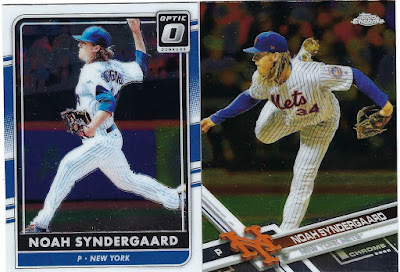 The other being Mets pitcher Noah Syndergaard, a pitcher I've grown to like and respect ever since I began collecting him earlier this year. It's just so unfortunate that the Mets' talented pitching staff that includes him, Matt Harvey, Jacob DeGrom, and Zach Wheeler can't all stay healthy at the same time to make a playoff run. Because if they could, they'd have the best pitching in baseball, no doubt. 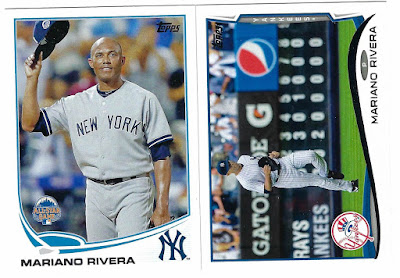 Towards the end of the box, I found cards from Mariano Rivera's last 2 seasons. His 2013 Update card shows him at the All-Star game while the 2014 Topps Flagship, his final Flagship card ever made is now mine.

By this point into the bins, I was extremely satisfied with what I had chosen thus far. I didn't think I could find anything that was better than what I already chose. That was until I found this last card. 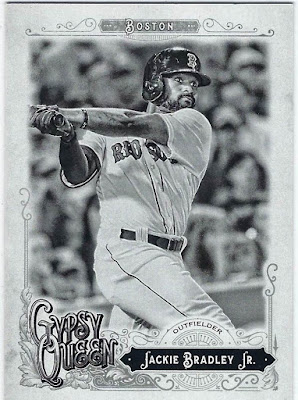 2017 Gypsy Queen Jackie Bradley Jr black and white parallel, numbered 36/50 on the back of the card.

I couldn't believe that this card was available of Bradley, one of my favorite Red Sox players for just 10 cents. I quickly added it to the pile after realizing what a steal it was. Numbered to 50 for just 10 cents, that's insane.

These dime bins were some of the best I've ever looked at before and I was so happy I looked through them. I have some more cards that I will be showing off tomorrow.

(Unrelated to the post but I really need to start organizing my baseball cards online does anyone have a good database reccomendation or a software they use? Any suggestions are appreciated, thanks).


Posted by Henry Blanchette at 5:44 PM