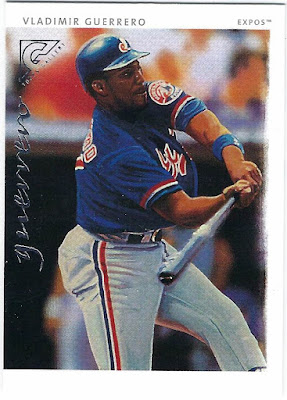 Happy New Year everybody. I'm incredibly happy and excited to deliver my first of many posts in 2018. My vacation ends today and I have to say that I had a really good time. I spent time with my family, was able to relax and was able to watch sports for a few day. One of the best parts of my vacation was being able to open and acquire new baseball cards together. We always enjoy opening packs together no matter what the set is.

That's why we decided to do one last holiday card purchase and get a box of 2003 Topps Gallery; Museum Edition.

I began enjoying Topps Gallery when the art-based set was revived earlier this year and produced as a  retail product. I bought a few rack packs and grew to enjoy the set. I didn't have or know a whole lot about the original Gallery sets, but my dad and I did a bit of research on this set before deciding to purchase a box of it for the holidays. 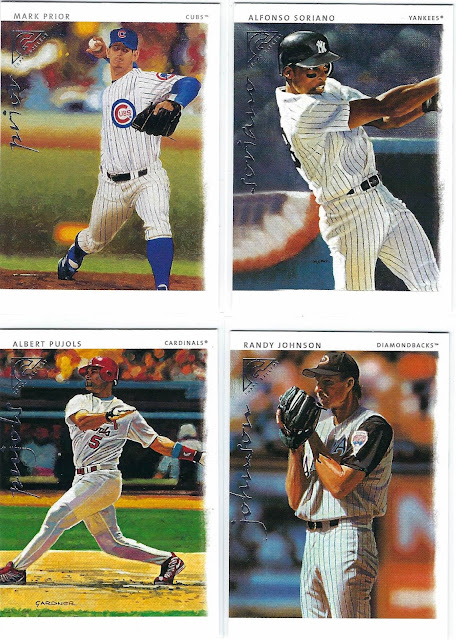 The cards are modeled after paintings and are created to look as such. The surface of the card feels like a canvas which is something I wish Topps would've incorporated into the 2017 revival. The main focus is obviously on the image, so there isn't much else to the card besides the team and player name on top along with the players' last name and the Gallery logo on the side.

The first 167 cards of the set are veteran base cards that include the stars of 2003 such as Luis Gonzalez and Carlos Beltran. 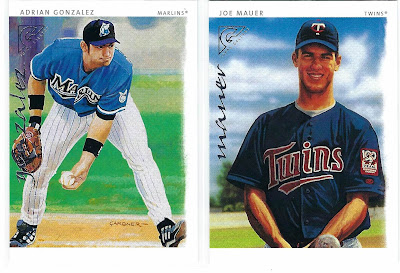 While cards 168-190 of the set are the prospect cards. This includes the best prospects of that time. Some prospects like Joe Mauer and Adrian Gonzalez went on to have pretty great careers. Others like Rocco Baldelli leave baseball fans wondering what could have been. They take on the same design as the base cards but aren't quite as common so most of what you get is the veteran base cards. 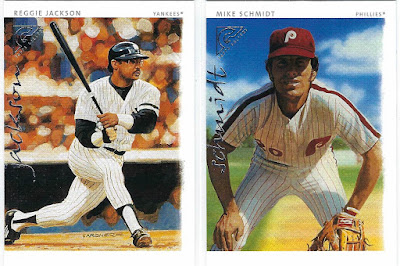 The final part of the base set is the 10 retired players included on the checklist. These are all players who played in the 70's-80's and feature some of the greatest players to ever play the game in some fantastic artwork. The first 2 I pulled were of Reggie Jackson and Mike Schmidt which is great considering I collect both of them. However, I feel like an opportunity was missed by not putting Mr. October on the A's. Seriously, how cool would that be? 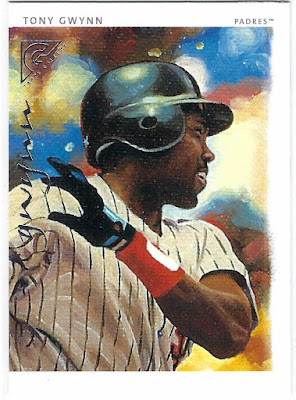 The other retired player card I got was of Tony Gwynn. Gwynn is the player I feel most strongly about starting a player collection for, but I don't usually see cards of his at the show or at the card shop. Still, he's one of the greatest hitters ever, so I think I'll start one up and see what cards I have of Tony Gwynn cards. 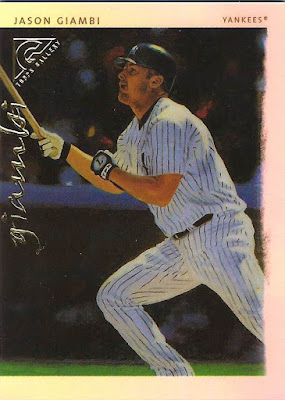 Another staple of the 2003 Topps Gallery set is the fairly-common rainbow refractors. These cards ditch the canvas cardstock and instead create a chrome card that is much thicker and a nice inclusion in the set. I'm not a huge fan of these, but it does switch it up from seeing base cards often, so I'll give Topps credit for that. However, I'd much rather have more base cards with the fabulous canvas feel. 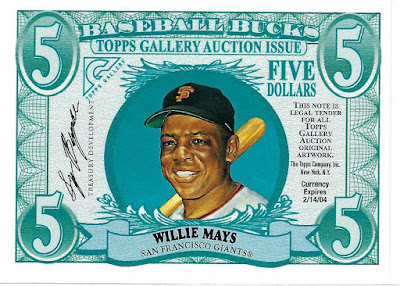 The next part of this set is the Baseball Bucks promo cards. These cards weren't just made because they looked nice, but were used for the artwork selling of the Gallery set that would take place from late 2003 to early 2004. The artwork was apparently for sale on eBay, and you could use Gallery Bucks to pay for it. And while I may be 14 years too late for the artwork promo, it's never too late to get a new card of Willie Mays. 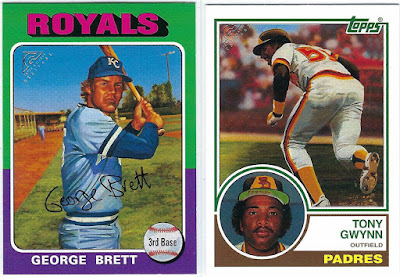 The other inserts in this set are the Gallery Heritage inserts. These were replicated in 2017 Topps Gallery, but, like the base cards, they didn't use a canvas cardstock. These Gallery Heritage cards not only use the canvas stock which I appreciate but also meticulously recreate past iconic cards of superstar players. The 1975 George Brett and 1983 Tony Gwynn were the cards I pulled which could possibly be a sign that I should collect Gwynn. After all, I've pulled 2 cards of the retired player in a set that includes mainly current ones. 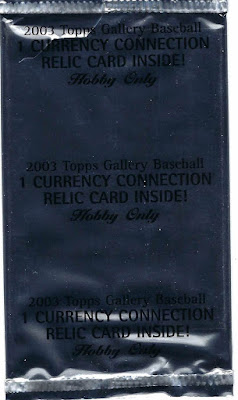 And then there were the hits of the box. Each hobby box of this set guarantees 2 relics and 1 Currency Collection relic that includes a coin relative to the country a player was born in. Cool concept right? 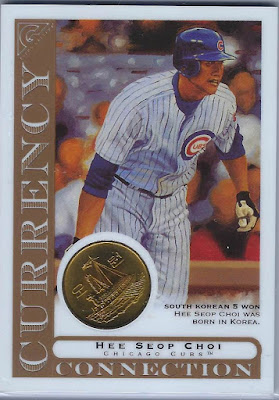 Well, let's just say the player I got wasn't my first choice, to say the least. I know the Cubs pretty well, after all, they are my 2nd favorite team. But I have never heard of Hee Seop Choi. He played just 4 years in the major leagues and hit .240 with 40 homers and 120 RBI. The South Korean currency is pretty cool, and he is on the Cubs so there are a few good parts. But considering that the checklist included players like Pedro Martinez and Vladimir Guerrero, I wasn't very impressed.

I was, however, impressed with the design of the relic cards of the set. In particular, the bat relics. 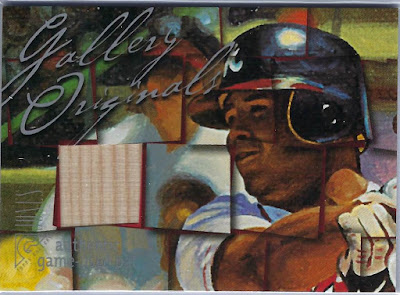 The first of the guaranteed relics I got was of 5-time All-Star outfielder for the Atlanta Braves, Andruw Jones. He, along with Chipper Jones and Brian McCann, was players that I enjoyed watching on some very talented Atlanta Braves teams. I like Andruw Jones a fair amount, and I love the design of this relic card. I'd love any player on a relic card that looks this good, maybe even Hee Seop Choi.

The next relic was just as spectacular as the Andruw Jones but was a jersey relic instead. 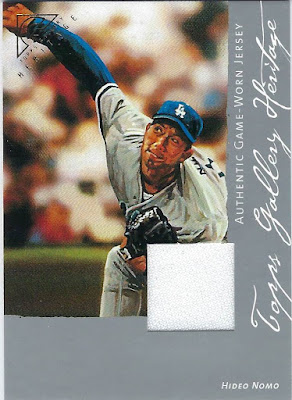 The next relic I got was of Dodgers pitcher Hideo Nomo who also played for the Boston Red Sox for a year. The silver on this relic and the image looks absolutely stunning and is truly what I enjoy most about Topps Gallery. It's able to make cards of semi-stars look fantastic, which is quite an impressive thing to do.

And with one pack to go, I was ready to see what other base cards I could get and possibly another Gallery Bucks card. But then, I got this... 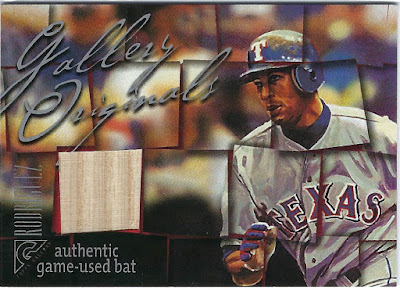 Like I said, these bat relics make any players' card look phenomenal, even Alex Rodriguez who has been quite controversial over his career. I don't dislike A-Rod, because of how talented he was before and after being suspended for steroids. He had some great steroid-free seasons and he had some excellent cards made of him, including this one. Plus, it's a bonus relic card, how on earth can you say no to that.


Posted by Henry Blanchette at 6:18 PM