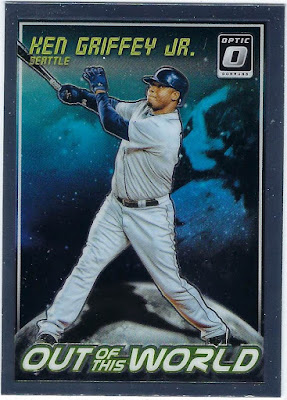 I've been teasing the 2nd of my card show recap posts from last Sunday's show since, well, last Sunday, but I ultimately decided that the end-of-year posts, like set rankings and analyzing my card collecting goals, would take priority.

Now, several days later, I'm ready to finish up my card show recap posts and before getting right into 2020 by setting roughly 7 card collecting objectives for the new year.

Although it may be January 3rd, think of today's post as a transition between 2019 and 2020, and what better way to do it than by showing the highlights from some packs that I brought back from Sunday's trip.

As you can tell by the title, the post is centered around Panini Donruss Optic, 2018 to be exact. I did not, however, buy a hobby box of this stuff. Rather, it's a retail box of 12 rack packs, each containing 16 cards. 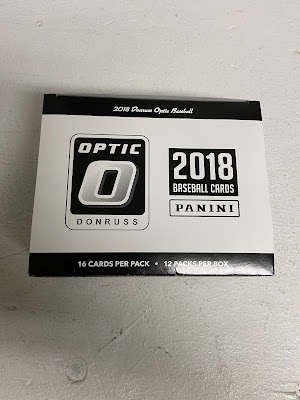 You've probably seen one of these online instead of at your local Target/Walmart. Regardless, the price of this retail box was extremely fair, especially given the caliber of the 2018 rookie class, and I thought it would be an enjoyable alternative to the traditional blaster and hobby boxes.

Once I took off the factory seal, moreover, I learned that each 16-card value pack contained 4 purple parallels. As you can imagine, I ended up with a large stack of them that I'll get to towards the end of the post. 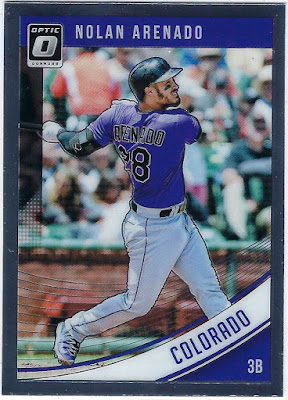 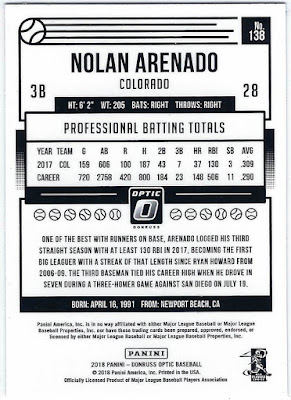 The design, as far as non-licensed cards go, isn't too shabby. The set design certainly works a lot better for Optic than it does for standard Panini Donruss. Usually, I'm not overly fond of Panini's card backs, but they did a respectable job with the 2018 Optic set.

Despite the sleek, silver lines that run across the card and the grey banner on the lefthand side, the cards aren't too busy, in my humble opinion. A fair amount is going on, but that's what's supposed to happen when it comes to chrome cards.

Obviously, these cards would be elevated to another level if they had logos, and just because it's a new year, it doesn't mean I'll stop pleading for Panini to get the MLB licensing rights. 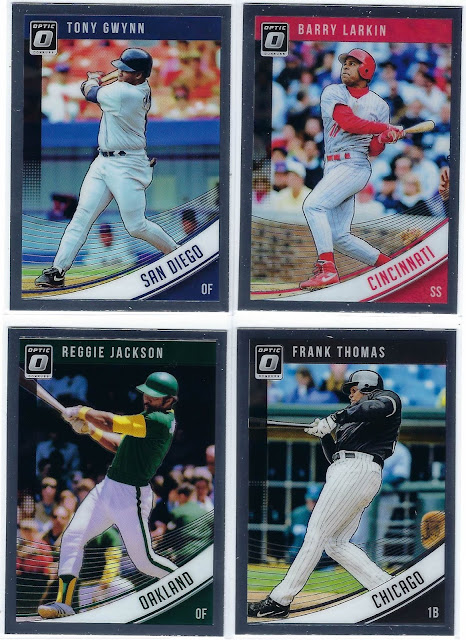 Another nice touch is the inclusion of retired players in the base set, and a large number of them to boost. Whether you're looking for 70s stars like Reggie Jackson or 90s Hall of Famers like Barry Larkin, Panini's got you covered with a base set featuring dozens of legends.

I always love to see Tony Gwynn get some love, but the Jackson card is easily my favorite of the group. Despite the blankness of his helmet, the angle is perfect so that you almost can't notice the missing logos. Not to mention, the gold and green look spectacular on chrome card stock. 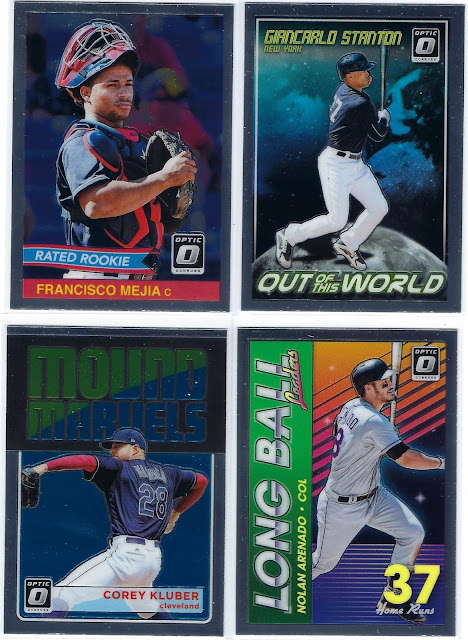 Inserts ran at approximately 1 per pack and, like the retired players' cards, I ended up with a wide variety. As far as I know, these cards are based on inserts from the initial '18 Donruss release, only they're enhanced with beautiful chrome card stock.

Seeing these in past trips to the dime boxes as well as pulling them from packs has given me an idea of which 2018 Donruss Optic inserts I like the best. The Long Ball Leaders cards are a vibrant, unique take on an ordinary idea, but if I were to choose a favorite, it would be Out of this World.

The Ken Griffey Jr insert from that set, in particular, is magnificent and can be found at the top of this post. 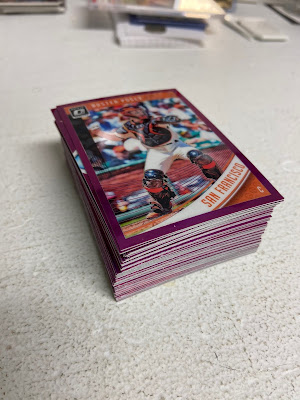 As I mentioned earlier, purple parallels were the rack pack-exclusive in 2018 Donruss Optic, running at 4 per pack. Thus, I ended up with 36 refractors at the end of the break, and despite the absence of logos, I find this shade of purple superior to the one used in Topps Chrome.

There's a purple parallel for every base card in the set, including Diamond Kings, Rated Rookies, All-Stars, and veteran base. As I opened the packs, I was searching mainly for big-name rookies in addition to players I collect. 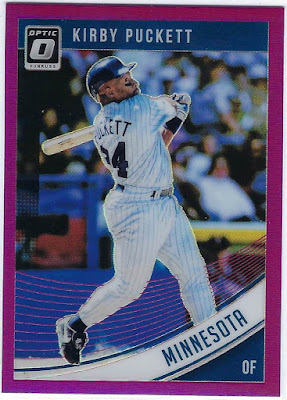 Here's a closer look at one of the rack pack-exclusive purple parallels which is more of a magenta shade while Topps Chrome is definitely pure purple.

Because Topps Flagship hasn't had borders in years, Chrome refractors have appeared significantly different than how they did in the first half of the 2010s. Panini, however, uses borders in Donruss, so by the time Optic rolls around, the colored parallels look more traditional, and that's another thing I appreciate about their cards. 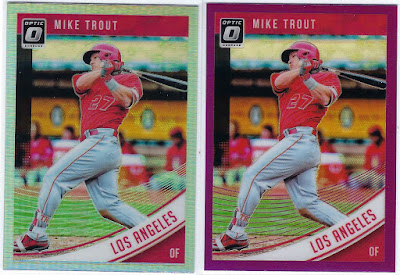 Optic parallels may not carry as much value as Topps Chrome refractors, but if there's one veteran you'd want to pull above all others, it's Angels superstar Mike Trout. In addition to the purple parallel on the right, I landed a holo refractor of the same card which, to my knowledge, is also an action image variation.

After checking with COMC, I can confirm that neither one of these cards is all that valuable whereas a Topps Chrome base and pink refractor would be worth a little more, but this retail box was also significantly cheaper, so I'm not going to complain. 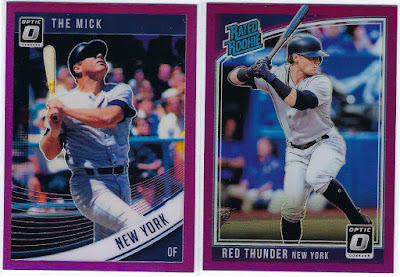 Both 2018 Donruss and Optic were loaded with variations that were noted with a filled-in Baseball on the back of the card. You can also tell a variation by the front, such as Mickey Mantle's "The Mick" and Clint Frazier's "Red Thunder."

Variations, as a result, were not only prominent among the base cards in the 12 rack packs that I opened, but in regards to the purple parallels as well.

Seriously, imagine trying to explain the words "2018 Panini Donruss Optic Purple Parallel Mickey Mantle "The Mick" Variation" to someone who hasn't collected cards since the 1980s. They'd be absolutely lost, and understandably so. 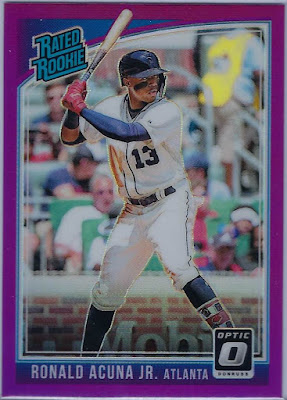 Like I said before, there's not a whole lot of value with Optic or many unlicensed cards come to think of it, but any type of Ronald Acuna Jr rookie card is pretty sought after, so I was stoked to land a purple parallel of his base rated rookie.

I also ended up with a handful of Albies, Ohtani, and Torres cards, but it just so happens that Acuna Jr is one of the hottest players in the game.

People are expecting him to be a perennial MVP candidate for the next several years, so high value or not, this card will be an excellent addition to that player collection.
Posted by Henry Blanchette at 6:49 PM