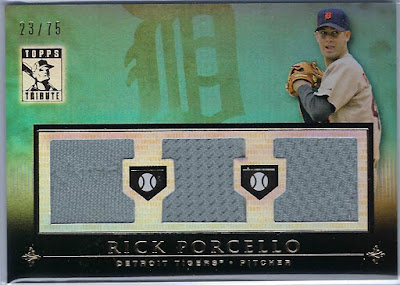 There aren't many teams who have gone through more ups and downs throughout the 2010s than the Detroit Tigers, so I'm interested to see where this team is headed once the 2020 season rolls around.

With Miguel Cabrera and a triumvirate of talented starting pitchers (Verlander, Scherzer, and Porcello) leading the team, the Tigers were World Series contenders for the first few seasons of the decade but, within a few years, found themselves with one of the worst records in Baseball.

Cabrera, the 2012 AL Triple Crown winner, grew older and, with that, came a decline in performance and an increase in injuries. They shipped Porcello to Boston in exchange for Yoenis Cespedes, Max Scherzer left for Washington and morphed into one of the best pitchers in the game, and they traded Justin Verlander to the Astros at the non-waiver deadline in 2017.

Alas, after opening the decade with a substantial chance of winning the Fall Classic, the Tigers' went 47-114 in 2019, the only team to finish out the year with a win percentage below .300.

Hopefully, 2018 1st round pick Casey Mize and whomever they draft 1st overall in 2020 will lay the foundation for the future of the franchise, but it doesn't seem like the Tigers are going to get all that much better for a few years.

At the same time, teams like the Twins and White Sox, Detroit's division rivals, have made major improvements this offseason, and with Corey Kluber now a member of the Texas Rangers, the AL Central is truly anyone's game.

Well, anyone except the Tigers, and also the Kansas City Royals. Basically, it's a 3-team race.

I thought that intro would tie nicely into today's post which, as you can see, is a top 5 relic cards/autographs post in which I highlight Detroit Tigers cards.

Although the series encompasses both autos and relics, it's worth noting that the Tigers list consists only of the latter. Now, let's get started. 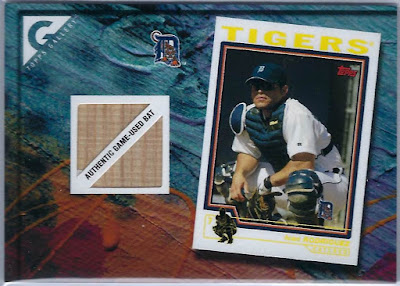 I don't know how much this would appeal to today's collectors, but seeing this 2005 Topps Gallery relic card makes me want to see something of this sort in today's Gallery releases.

Perhaps, Topps can make relic cards a blaster exclusive and promise 1 in each box just like Panini does in a ton of their retail formats.

The design of the relic card above, like a lot of Gallery, is abstract. The color combination is nice and I like the decision to feature a bat relic, though I could certainly do without the "authentic game-used bat" banner that covers up some of the memorabilia. 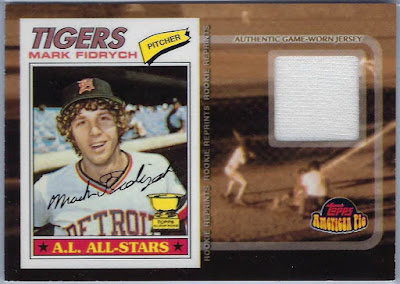 This isn't my only American Pie Rookie Reprint Relic; I have another of George Brett that pays homage to his 1975 Topps rookie, but in some ways, I prefer the use of Fidrych's iconic 1977 All-Star and rookie cup card.

Whereas the bat relic was the perfect fit for Ivan Rodriguez's Gallery relic, a plain white jersey is the best bet for Fidrych's card, and I'm not usually an advocate for PWJ's on any type of relic.

However, to adhere to the vintage theme of the American Pie set, the jersey piece needs to look like it came off Fidrych's uniform from '77, and that's exactly what Topps was able to do. 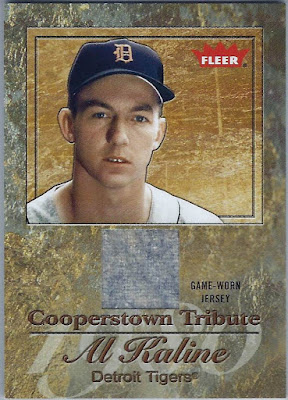 I don't think I'll ever be able to get enough of these 2005 Fleer Tradition Cooperstown Tribute relics. The design is truly elegant, and the stone pattern that constitutes most of the card was a brilliant choice by Fleer.

Plus, I'm just noticing now that they've included the year of Kaline's induction into the Baseball Hall of Fame, 1980, in obscured letters at the bottom of the card. While I wish Fleer would've been able to feature this detail in more of a profound manner, I can't point out many other issues with the card.

Kaline, moreover, retired in 1974, meaning that this jersey is at least 56 (ish) years old. Now that's a piece of baseball history that I'm more than pleased to have in my collection. 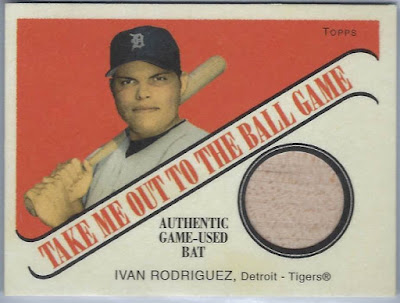 Ivan "Pudge" Rodriguez is making his 2nd performance on the countdown with a mini bat relic from 2004 Topps Cracker Jack.

The 2 relic cards of the 1999 AL MVP award winner are also the 2 game-used memorabilia cards on this list which is something that, given the eras in which Fidrych and Kaline played in, makes sense.

The mini relic above ranks so highly on this list because of its simplistic design that adheres to the Cracker Jack set. It doesn't try to do too much, but it's successful at what it does try to do. The relic is a reasonable size, no banners cut through it, and every single detail has a purpose. 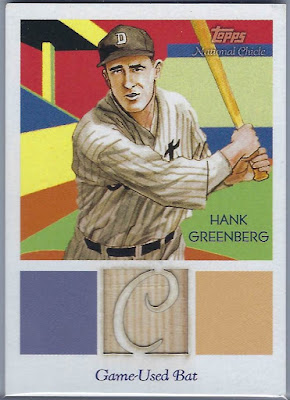 I don't think I've ever seen a Hank Greenberg relic in all the years before and after I picked this card up at the show several years back. A National Chicle back variation, it's actually numbered out of 299 copies on the back of the card.

Like the banner that ran across Rodriguez's Gallery relic, the Hank Greenberg card features a detail that obscures the memorabilia itself, but unlike the Pudge relic, I don't mind the wood-carved "C" on the Greenberg card.

That's because the touch actually compliments both the card, specifically its artwork, as well as the bat piece. The National Chicle set may have only lasted a year, but it left us with some phenomenal cards and the one above is certainly no exception.
Posted by Henry Blanchette at 6:28 PM