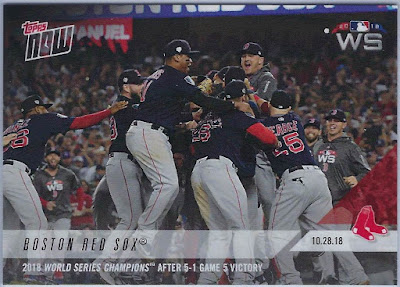 When I celebrated the Boston Red Sox's World Series victory back in October of 2018, I never, not for one second, imagined that such a shameful scandal would emerge years later, leading some fans to ask for an asterisk to be placed next to their Fall Classic win and more so that of the Houston Astros from 2017.

That's because, over the last 2 days, the MLB has been rocked with news from both organizations. The punishments that commissioner Rob Manfred levied on the Astros yesterday for their role in the sign-stealing scandal during the 2017 World Series were swift and severe.

Just a couple of hours ago, anticipating that the league's actions against manager Alex Cora would be drastic (he played a vital role in the Astros' scandal; it's unclear in regards to Boston as the investigation has yet to be completed), the Boston Red Sox fired Cora, a year and a few months after culminating a historic season with a decisive World Series victory.

I bought the Topps Now card above the following day, October 29th, without any hesitation. After all, this was a monumental day; it's not often that your favorite team wins it all.

I can't comment all too much on the Boston Red Sox scandal, as the league has yet to determine the significance of the sign stealing. It's evident, however, that between the respective World Champions in 2017 and 2018, there's one common component, and that's Alex Cora. 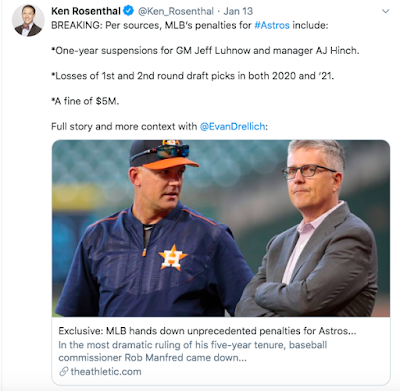 Yesterday afternoon, the news began pouring in that the league had issued its punishment(s) to the Houston Astros, and to say the least, they were not lenient.

1. Manager A.J. Hinch and GM Jeff Luhnow were each suspended for the entire 2020 season without pay.

3. The organization was fined $5 million.

Soon after the parameters of their punishment were reported, the Astros announced that both Hinch and Luhnow were to be dismissed. The move makes sense, considering that neither was going to be paid during the 2020 season, and both of their legacies have been tarnished by this scandal.

Immediately after the firings of Hinch and Luhnow, all eyes were on the Boston Red Sox in regards to Alex Cora. The 2-time World Series Champion, even after his firing, is facing a historic punishment for his role.

Some reports insisted that the Red Sox were going to wait until their investigation was complete before making a decision on Cora's future. Then, this happened. 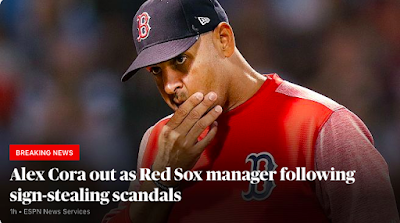 At this point, there's not a whole lot I can say. Defending the Red Sox is pointless and stubborn, but I also can't make any bold statements before the MLB terminates the investigation and releases some sort of report.

That said, as much as Cora accomplished during his short tenure in Boston, the Red Sox made the right decision. Unless the findings in the Red Sox's role are substantial, Cora will likely face the brunt of the punishment, for he played a larger role in the Houston scandal than Hinch or Luhnow, and he seemed to have brought that same energy to Boston.

Only time will tell what will really happen, but it's, nonetheless, a sad day for any sport when asterisks need to be placed next to championship victories.
Posted by Henry Blanchette at 8:54 PM