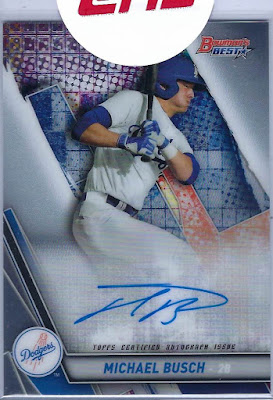 I originally intended to reserve today's post for 1 major card that was set to arrive in the mail, one that I've been anticipating for a couple of weeks now. If you've been keeping up with the blog as of late, you may have an idea as to what I'm talking about.

However, unbeknownst to me, another card, this time a redemption from 2019 Bowman's Best, arrived at my doorstep, so I figured I'd turn this into a 2-card mailday, starting with the Michael Busch prospect auto from a 2nd Bowman's Best box that I opted not to showcase on the blog.

Following the immense luck that I had with my first go-around of 2019 Best, a topic I'll touch on a bit later, it made sense to try another box of what has been one of my favorite releases over the last few years.

Unfortunately, nothing major came from hobby box #2; otherwise, I would've done a post about it, but I did receive a Michael Busch redemption that's now contributing to a post a few weeks after the break.

Like a reasonable number of the prospects featured in the Best of '19 checklist, Michael Busch is not a player I know too much about. As it turns out, he was Los Angeles' 1st round pick (31st overall) in the 2019 MLB draft, and he's currently the #8 prospect in their system, behind guys like Jeter Downs and Gavin Lux. 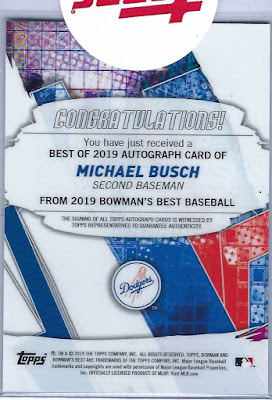 The most important thing to keep in mind when it comes to Bowman's Best autos and any type of prospect card, for that matter, is that you need to be patient.

Right now, I know very little about Busch, but he could be one of the game's fiercest hitters or elite defenders several years down the road. The same goes for any of the other prospect autos I've pulled from this product, whether it's from 2017, 2018, or '19.

Of course, some of these guys autos will end up in a $5 bin at the show years from now, but that's the risk you take with a product like this. At least there are 4 autos per master box and the possibility of pulling rookie, veteran, and retired player signatures, allowing this release to appeal to a much wider audience.

Speaking of the autograph checklist, it's time to move onto the highlight of today's post. If you haven't guessed what it is so far, let's just say it has something to do with that 1st hobby box break and a package from Beckett that came via FedEx a few hours ago.

That's right. The mega-hit, Mike Trout atomic refractor autograph from Beckett returned from Beckett earlier today, graded, and I'm beyond excited to share it with all of you. 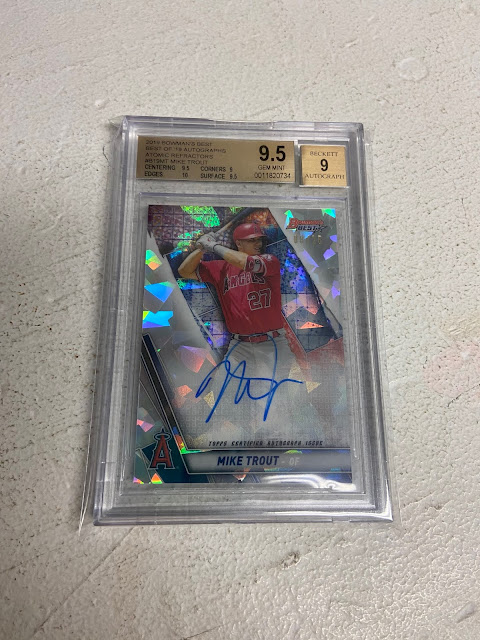 There it is, in all it's glory, the crown jewel of my entire Baseball card collection; the Mike Trout atomic refractor autograph from 2019 Bowman's Best. Somehow, the card looks even more stunning protected in a BGS slab.

And before I say anything else about it, yes, I'm aware it received a 9 for the autograph. I wasn't too shocked by this, however, since Trout slightly adjusted his signature upon the release of products towards the end of 2019.

If you compare this to some Trout autos from years past, you'll notice a few differences. Nonetheless, I know the card's legit, and Beckett does too, otherwise, they wouldn't grade it. Besides, the actual card received a 9.5, so I can't be overly disappointed. 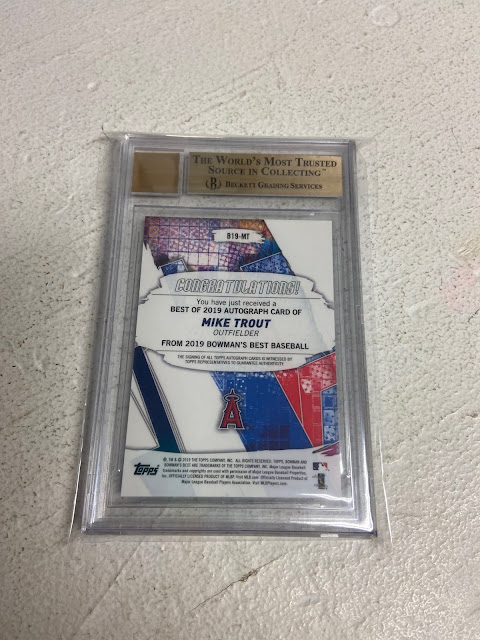 Of course, I wanted the card to receive as high of a grade as possible, but the main thing I look to do when sending any card off to Beckett is to preserve it.

Whether it's as old as the 1950s or as recent as 2019, grading a card, in my opinion, is the best method of preservation. Plus, you get a detailed analysis that includes 4 sub-grades, as well.

Dust always seems to find its way into penny sleeves and top loaders, and while magnetic top loaders might be the way to go for some, I like to see my most valuable cards in a BGS slab with a grade listed above.
Posted by Henry Blanchette at 5:55 PM