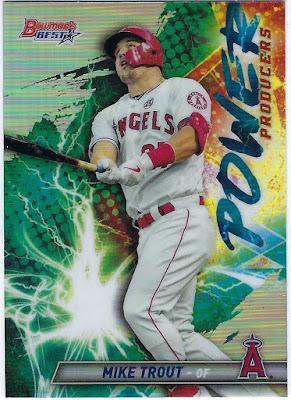 Since 2017, my Dad and I have had a tradition of purchasing a hobby box of Bowman's Best in time for the holidays, mainly because the release is timed perfectly (it's either the Wednesday or Friday before Christmas).

Our first box back in 2017 didn't deliver anything too noteworthy, especially as far as autographs are concerned, but that didn't deter us from continuing the following year. The checklist of the 2018 release was so spectacular that it seemed likely that we'd pull something fabulous.

And we did. First, there was the phenomenal box from Christmas Day, 2018; then, we lucked out again a little while later.

Though the product went up in price between releases, Bowman's Best will forever rank as one of my favorite sets in that it combines everything I like into a cohesive melting pot of chrome glory.

The checklist features both rookies and veterans as well as this year's top prospects. The design is always quite modern and features a range of different parallels.

There are typically 4 quality insert sets, including one that pays homage to a previous Bowman's Best design, and a dynamic autograph checklist to finish things off.

Even though we won't be celebrating Christmas for another week, Bowman's Best was actually released today, 7 days before I was set to open up a box of it and continue the tradition.

For whatever reason, my Dad wanted to get a box on release day as an early Christmas gift, so he got to the card shop as they opened today and saw the owner open the case before his very eyes; then, he chose the box and just like that, we had a hobby box of one of my all-time favorite products. 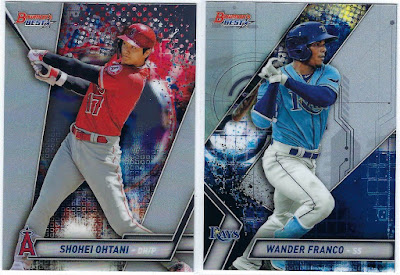 Similar to 2018, the designs differ slightly from veterans/rookies to prospects, but the main idea remains consistent. The cards are ultra-modern, just as they've been in the past, with the prospects having more of an intricate design compared to the "splatter paint-esque" style of the vets/rookies.

Because of how similar the 2 variations are, it's hard to pick a clear-cut favorite, but I happen to like the extra splash of color on the Ohtani card over the more futuristic details on Franco's. 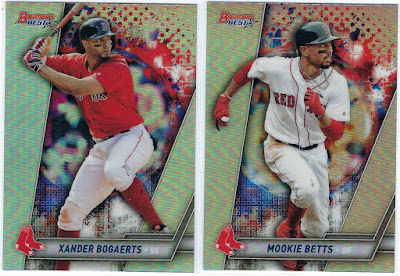 Each 5-card pack guarantees one base refractor, a card that looks much more stunning in-person than scanned and shown on a computer.

Because of how common they are, you end up with a wide variety of non-numbered refractors, 12 to be exact, when all is said and done, including a healthy mix of prospects, rookies, and veterans.

As far as the latter of the 3 is concerned, I can't complain about ending up with not 1 but 2 Red Sox stars. Mookie Betts, who's coming off another impressive season and is now entering a period of uncertainty regarding his future, and Xander Bogaerts, who seems to just keep on improving year after year. From a value standpoint, however, the best of the refractors would likely be the Pete Alonso rookie shown above. I have no idea what the value is for these cards, though being 1 per pack probably ensures that it's nothing too crazy.

With that being said, I'm growing increasingly fond of the set design and while I prefer Tatis Jr in the long run, there's no denying that Pete Alonso is an incredibly special player. I just wish my scanner did these cards more justice. 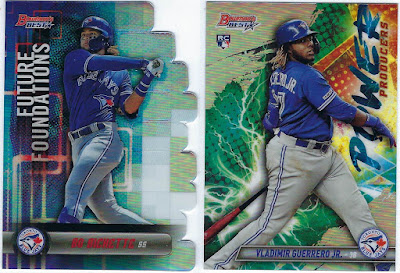 As I mentioned, there's a small handful of insert sets featured in Bowman's Best each year, and my hobby box gave me a sampling of all of them.

Though I liked seeing Power Producers (right) return for the 2nd consecutive year, I took particular interest in the Future Foundations die-cuts shown on the left.

I'm not sure if Topps' goal was to have the card resemble the building blocks that make up a foundation, but that's what I got from the cards nonetheless. 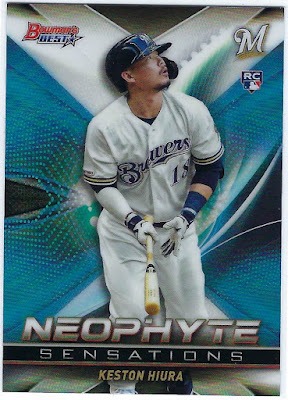 Neophyte sensations is another returning insert set from 2018 but with more of a modern vibe this time around. If someone hadn't seen these cards before, they'd be very difficult to explain, but I like what Topps has done, nevertheless.

In comparing them with last year's design, I think I'll give the 2019 cards a slight edge only because I think all the minor details come together better than they did beforehand. 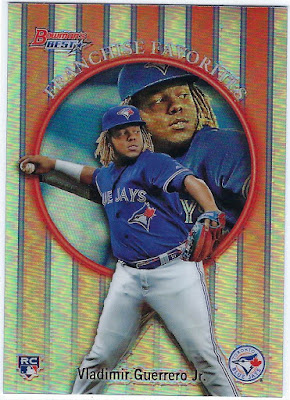 My favorite inserts, undeniably, would have to be the 1999 Franchise Favorites recreates in which Topps pays homage to a beautiful insert set design from 20 years ago.

In this version, players from '99 as well as today's active stars and prospects are featured in the checklist. There are also autographed versions that serve as case hits.

The favorable pack odds (1:3 packs) allowed me to end up with 4 of these Franchise Favorites cards by the end of the box break, including Vlad Jr, Joey Bart, and Chipper Jones. 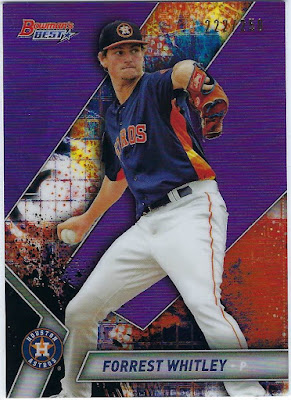 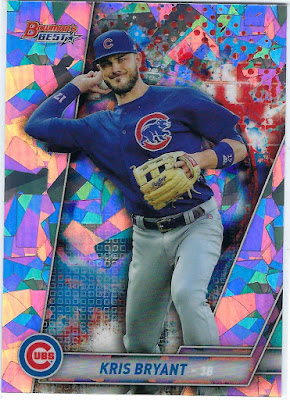 Another benefit of purchasing Bowman's Best is the lower print run when compared with sets like Topps Chrome and maybe even Finest. This production is what allows for there to be at least 1 numbered card per box as well as the guaranteed atomic refractor.

Forrest Whitley isn't a guy I know a lot about, but the same certainly cannot be said about Kris Bryant. His stock may not be as high as it was 2-3 years ago, but he'd still be one of my first choices along with other Red Sox and Cubs players. 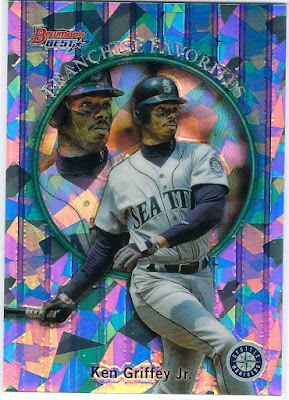 Atomic inserts fall at approximately 5 per 8-box case, so the odd's are in your favor to end up with one of them in an individual box. Luckily for me, that ended up happening, and towards the middle of the break, this gorgeous Ken Griffey Jr insert was mine.

I don't think this card would've been the same if they'd shown Griffey Jr on the Reds instead of the Mariners. There's something about the Seattle jersey with the atomic refractor design that simply cannot be matched by any other card product.

That's what makes Bowman's Best such a special product for me. No other set delivers such beautiful and creative cards, not to mention reasonable odds of pulling them, as far as Topps is concerned. 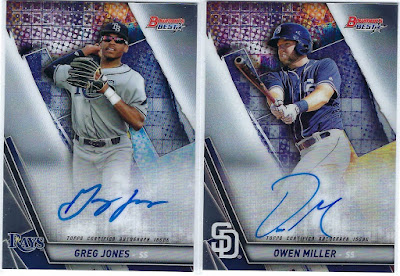 I can't believe I've gone on this long without even getting to the autographs yet, so I promise I'll wrap up the post fairly quickly. Because of the fact that you get 4 autos per box, not every one of them is going to be a star player. I've learned that from my previous few years of Bowman's Best.

Furthermore, 3/4 of the guys are usually prospects, so the best you can hope for without being unreasonable is position players that could potentially blossom into the next big thing. Who knows? That could happen with Greg Jones and/or Owen Miller. 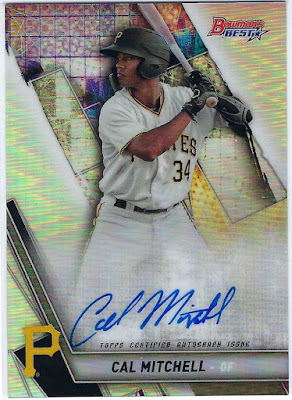 There's usually some sort of base (non-numbered) refractor auto as well, though the scanner has once again caused the card to resemble a superfractor more so than a refractor parallel.

As I mentioned, a box of Best guarantees 4 autographs, meaning I have 1 left to show off. Throughout this post, I haven't alluded to any kind of massive pull; rather, I've spent my time addressing a product that I absolutely adore.

However, it's worth mentioning now that the following card is, undoubtedly, the greatest pull of my entire life. 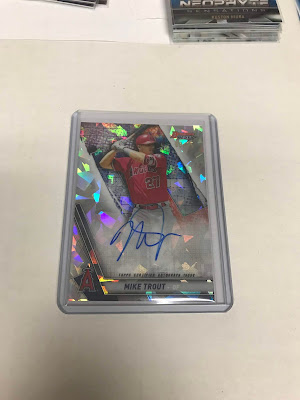 I pulled this card roughly 5 hours ago, shaking as I placed it into a penny sleeve and top loader. Even now, it still seems totally surreal; I truly cannot fathom that this actually happened. I cannot believe that I have a Mike Trout autograph in my collection.

And not just any Mike Trout autograph, an atomic refractor, numbered 8/25 and something that you can't get out of any other Topps product.

Though he's on the autograph checklist every year, I always thought the Trout autos would only end up in the hands of lucky collectors on Twitter and case breakers.

Well, I guess I'm one of those lucky Twitter collectors now, and after a year of "meh" pulls from hobby boxes, this Trout auto truly makes it all worth it.

Yeah, I'm still kind of in shock, so I don't have a whole lot to say, but I do intend to get this card graded ASAP. When it comes to a card of this magnitude, it's only right to have it permanently protected.

And as if my past pulls hadn't given me enough of a reason to love Bowman's Best, this Trout autograph did the job a million times over.
Posted by Henry Blanchette at 10:52 PM