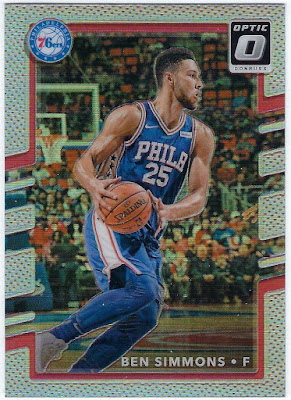 Earlier this week, I hinted about some sort of Black Friday purchase that I'd post about once the cards arrived in the mail, but given the content of my blog, I don't think many expected it to involve Basketball cards.

I've only made a single Basketball-related post since I started this blog well over 2 years ago: a Donruss Optic mega box that was on sale at my LCS. All 642 other posts have focused on Baseball cards only.

I spent a couple of days last weekend debating whether I wanted to participate in COMC's annual Black Friday sale. Even though they have every possible card that a collector could want, I find the site overwhelming at times.

Because of the massive inventory, I never quite know where to start, and I feel obligated to track down cards that would otherwise be unavailable to me.

I learned on Twitter that Blowout Cards was having a massive card sale, so I visited their site hoping for some inspiration. There, I found the product that I eventually purchased; the 2019 Basketball "pack party." 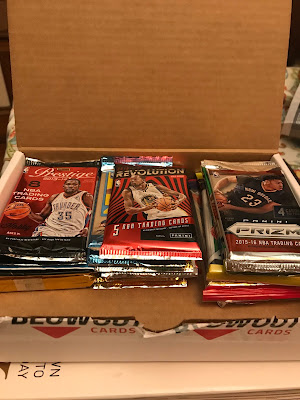 Consisting of 20-25 packs, the Blowout pack party is available for Baseball, Basketball, and Football and features a wide range of products and formats, including hobby, retail, fat packs, value packs, promo packs, etc.

I passed up on the Baseball pack party because I had a feeling that I'd pull a fair number of base card duplicates, but I watched some breaks on YouTube, and the box had a ton of value. Both 2018 Topps Chrome jumbo and 2019 Topps Chrome Sapphire packs were in every box.

I opted for Basketball, however, because I really wanted to try something new. It's my 2nd favorite sport and something that I follow fairly closely, and I figured this would be an enjoyable purchase with nice value. 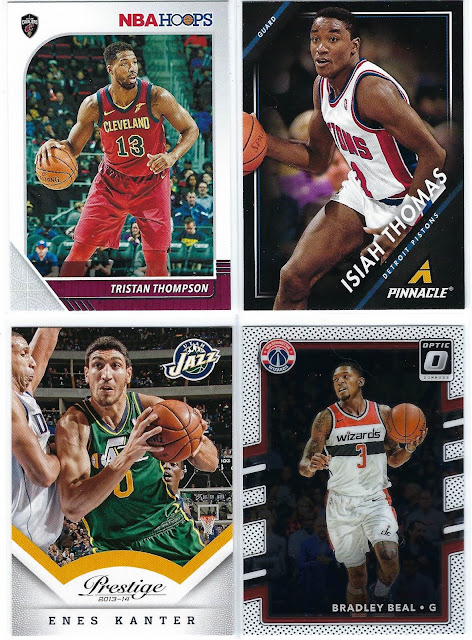 By the end of the break, I, understandably, ended up with a fair number of base cards which made me glad that I chose the Basketball pack party rather than the Baseball version. Had I selected the latter of the 2, I would've pulled many base card duplicates.

I'm not sure of the value of most of this stuff, but it's, nonetheless, interesting to discover and get a small sampling of over a dozen Basketball products, all of which were produced by Panini. Though I've seen my fair share of breaks on YouTube, it's another thing to discover for yourself. 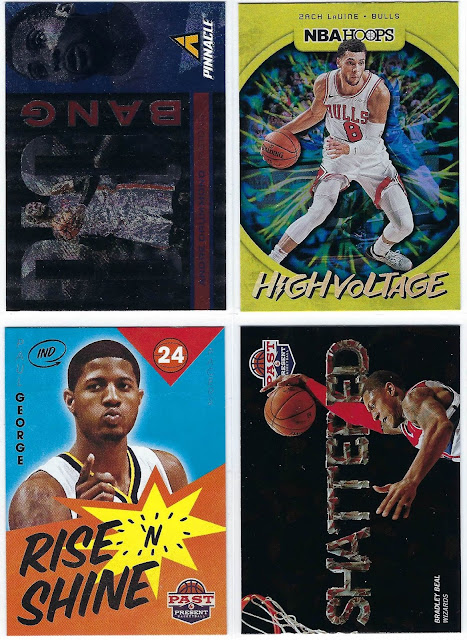 Well-executed inserts and parallels are some of my favorite things to pull from Baseball card packs and, unsurprisingly, the same goes for Basketball.

The ~20 packs that I opened delivered a wide variety of products and, thus, inserts, ranging from the Rise 'n Shine to High Voltage sets, 2 cards that truly couldn't be more different.

The 4th card shown above, though the scanner doesn't do it justice, is actually a cracked ice parallel from an insert set called Shattered. Though the touch is very faint, I appreciate its inclusion. 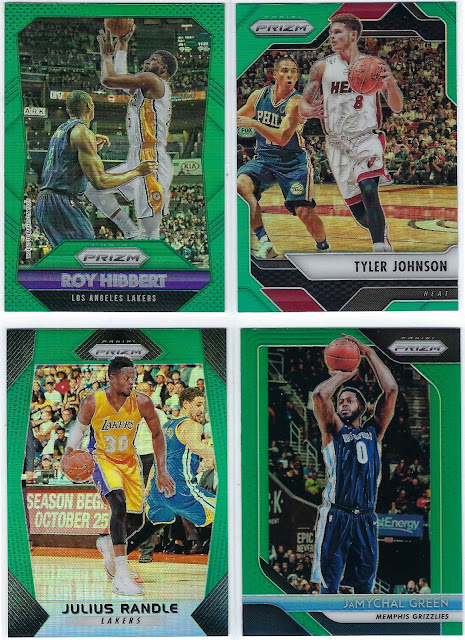 The most popular of all Basketball products, Panini Prizm is flying off the shelves right now at retail stores while hobby boxes are debuting at ~ $400. The NBA pack party was loaded with Prizm retail packs and, thus, some of the retail-exclusive green parallels.

When it comes to Prizm, the major value comes from rookie parallels, particularly silvers, the equivalent of a base refractor, and serial numbered cards. None of the greens are numbered nor do they feature rookies, but they sure are beautiful to look at. 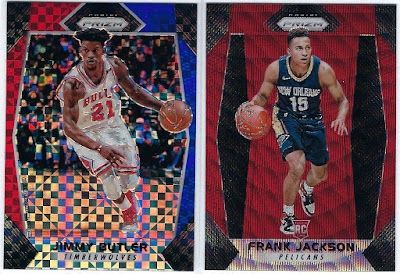 But the Prizm parallels didn't stop simply with the green refractors; the packs that I opened introduced me to a couple different designs, including RWB mojo and red wave Prizms.

Though neither of these cards is numbered, the designs, particularly that of the RWB mojo cards, are extremely creative, more so than most of the products that Topps puts out with the possible exception of High Tek. 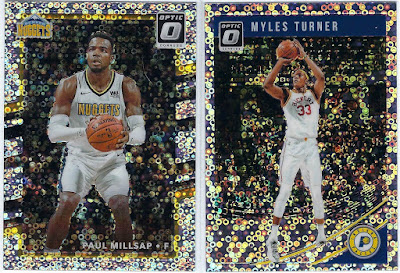 One format exclusive to Panini products is Fast Break, a cheaper alternative to hobby boxes that doesn't guarantee any hits but is far less expensive. If you're not familiar with it, think of the medium as a retail box with funky exclusive parallels that fall at 1 per pack.

Though I struck out when it came to rookies once again, the Fast Break parallels are beyond gorgeous; in my eyes, it's just another reason to appreciate Panini and hope that they get the MLB license. 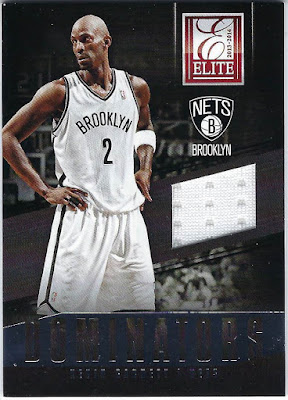 With anywhere from 20-25 guaranteed packs per box, it stands to reason that you'd pull a couple of hits, and that's exactly what happened with my Blowout pack party purchase.

The first pack that I opened was from 2013-14 Panini Elite, a set that I didn't think would have a whole lot going for it. Then, out came a Kevin Garnett jersey relic, which Panini details on the back of the card, came from his time with the Boston Celtics.

Garnett is a player who I am quite familiar with thanks to his contributions to the Celtics' NBA title in 2008, so I was pretty pleased with this relic, especially since it came out of pack #1. 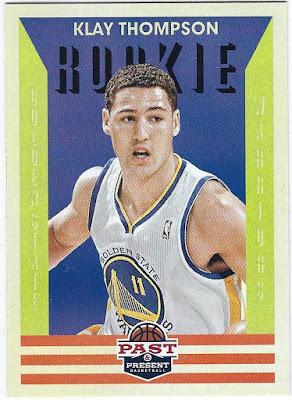 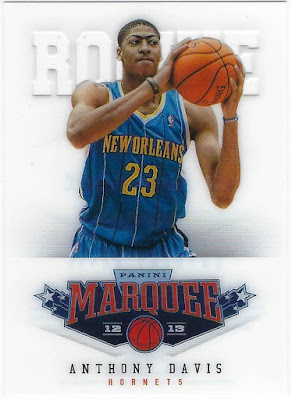 The older packs, dating back to the beginning of the 2010s, presented the opportunity to pull rookie cards of players who have blossomed into established veteran superstars, and that's exactly what happened.

The 2 cards above could not be more different. First, there's the Thompson rookie from Panini Past & Present., Then, there's Anthony Davis' rookie card from Panini Marquee which features a see-through "rookie" label at the top of the card.

If I do get (somewhat) into collecting Basketball cards, I'll have a couple of nice rookies to start things off. If I decide not to, I still have a couple of great cards with polar opposite designs.
Posted by Henry Blanchette at 8:11 PM