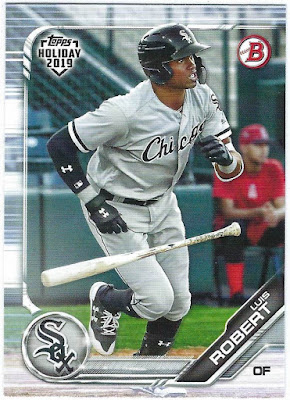 As I was still in a state of shock from Wednesday's once in a lifetime pull, my Dad alerted me of a bonus pack included with his purchase of our annual hobby box of Bowman's Best.

Topps runs several promotions each year, most notable National Baseball Card Day, in which you receive some sort of bonus pack when you purchase x amount of Topps products. The Holiday promo is no different, delivering a 3-card pack in the respective year's Bowman base set design.

The base cards, however, are indistinguishable from regular Bowman base aside from a minuscule Topps Holiday logo in the top left corner. I suppose they save all of their festivities for the holiday mega boxes available at retail stores.

While the actual design leaves a little to be desired, you can't beat free Baseball cards, but after Wednesday's monster hit, I was surprised that there was another pack for me to open. 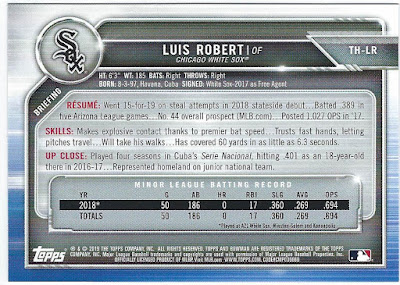 The card backs are also identical to Bowman paper, but because I purchase so few prospect-related products, I don't mind adding a couple more to my collection, especially players at the caliber of Luis Robert.

As far as I know, the 22-year old is a top 10 prospect with loads of potential, set to make his MLB debut sometime in the next year. With him, Moncada, Abreu, and some other young talent, perhaps the White Sox can pose a threat in the coming years, and there can be some type of competition in the AL Central division. 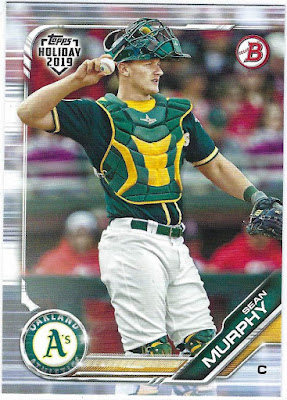 As I mentioned earlier, each pack comes with 3 cards, and there's a chance, as far as I know, for numbered parallels in addition to autographs. I'm not 100% certain on if there are parallels, but I know that you have a chance at pulling autographs. 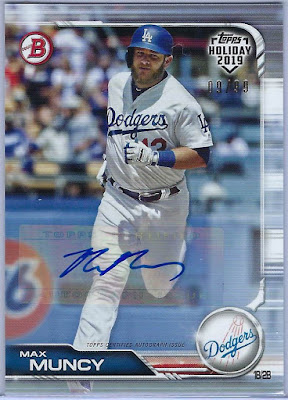 Because I landed one myself. As if the Baseball card gods felt I needed anything else to justify this purchase, the bonus pack, which I only found out about a day after the purchase, contained a Max Muncy autograph.

It's not as flashy as a Trout auto #/25, but let's be real, nothing will ever top that pull. Nonetheless, Muncy is a respectable, talented slugger for the Los Angeles Dodgers, and the card is serial numbered 9/99.

This isn't my first Max Muncy autograph; I pulled one from 2019 Topps Gypsy Queen earlier this year and sent it off to Night Owl. I'm not sure what I plan on doing with this one, but after Wednesday's pull, I'm shocked that something like this came out of the bonus pack.
Posted by Henry Blanchette at 7:13 PM