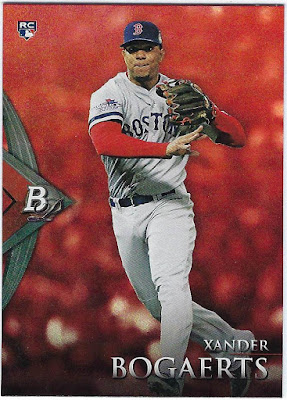 Roughly a month ago, I signed up to participate in A Penny Sleeve For Your Thoughts' secret Santa. This event marks the first time I've participated in some sort of holiday exchange since I began blogging back in August of 2017.

I'm putting the finishing touches on my secret Santa package as I speak, so it should arrive at its recipient by the middle/end of the upcoming week. As for the cards that I received, I didn't think too much about that part until a package arrived earlier today.

As it turns out, my package is from The Bucs Stop Here. Right off the bat, I have to thank Nate from the blog for sending a wide assortment of excellent cards, which I'll get to in a minute and Jon for organizing the exchange.

I hadn't even looked at a single card Nate sent me before I found a thoughtful note attached, explaining a little about his collecting habits and what the package entails. The secret Santa has already helped me make a connection, so I'm very appreciative of that.

Now, let's get to the contents of this exchange. 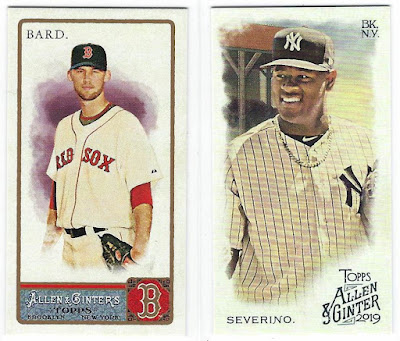 Even if I hadn't read his note, I can certainly tell that Nate took a close examination of both my want list and player collection tiers list while putting together this package of cards. There were several team bags, labeled with corresponding parts of my collection, the first of which was "want list +
Kimbrel."

Inside the bag, I found a few needs from my A&G frankenset, including the Daniel Bard and Luis Severino cards above from 2011 and 2019 Ginter respectively. I also came across some new additions to the Kimbrel Collection, like Topps Chrome Update. 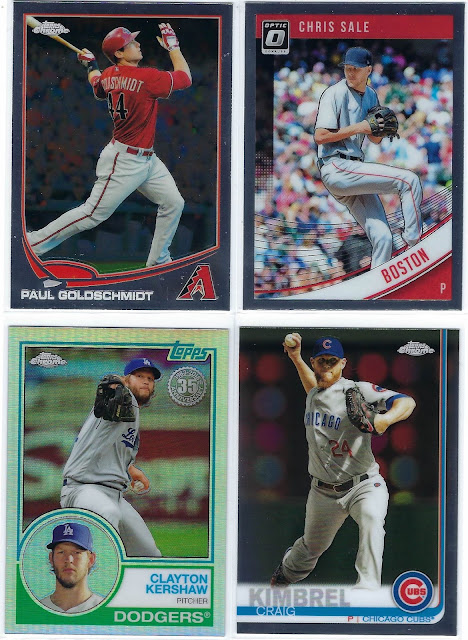 Speaking of chrome cards, from the contents of the package and his blog, I think Nate's a pretty big fan of these sets. The majority of the cards he sent my way are chrome cards that also feature players that I collect, a win-win situation if you ask me.

3 of the cards in the image above (Goldy, Sale, and Kimbrel) will go to their respective PCs whereas the Kershaw insert will end up in my 2018 Topps Chrome master set binder. 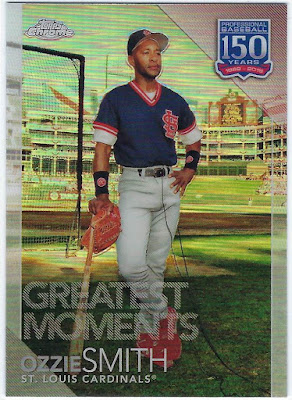 I dedicated a whole post to these 150 Years of Baseball chrome inserts a month or so ago, so it's nice to see that a few, most notably Ozzie Smith, were sent my way. In fact, I'd never seen this card until it showed up on my doorstep in a bubble mailer.

When I first purchased and pulled these cards from packs, I considered completing the insert set; I soon came to the conclusion, however, that these cards were better off as parts of player collections than all together in a set, so I opted for the former of the 2 choices. 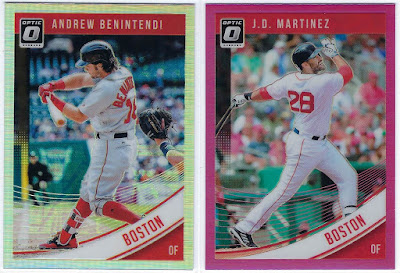 The selection wasn't limited to just Topps products, however. Panini was also represented by a couple of parallels from the 2018 Donruss Optic set: an Andrew Benintendi holo and a J.D. Martinez pink, another couple of awesome additions to my player collections.

Speaking of PCs, each bag of player collection additions was labeled based on what tier the player is a member of, a sign that Nate truly took his time to look over my want list and tiers. For example, while Benintendi was in the silver tier bag (50+ cards), Martinez was in the bronze (50> cards). 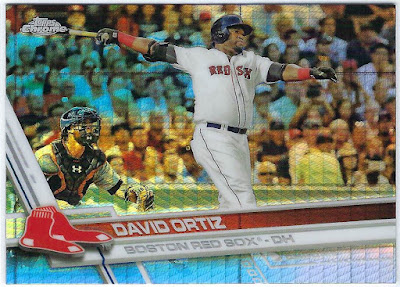 Big Papi, on the other hand, is a member of the platinum tier. That is, I have 200 or more cards of the, hopefully, future Hall of Famer. While I have the base version of Ortiz's 2017 Topps Chrome card, I did not have any of the refractors until today, so I was incredibly pleased to find the prism version in one of Nate's team bags. 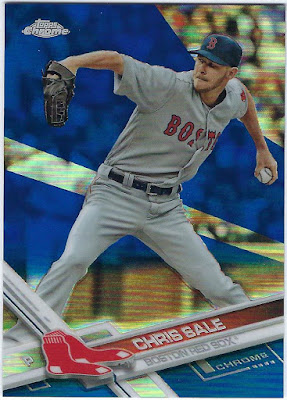 I'm also a huge fan of serial numbered cards, and I'll take any opportunity to add them to my player collections for the right price. Acquiring them in trades is even better, for they present me with the opportunity to acquire cards that otherwise wouldn't be available to me.

It appears that Chris Sale will be healthy by the time Spring Training rolls around in 2020. Hopefully, he can become the pitcher he was in the first half of 2017, the year this blue chrome refractor is from because when he's at his best, Sale's a top 5 pitcher in the game. 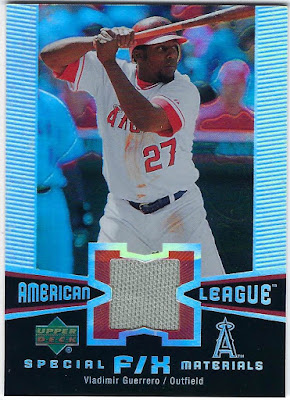 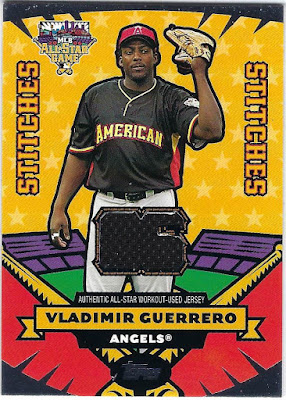 Finally, a couple of Vladimir Guerrero relics, one of my favorite players and type of card to collect. The decline in the popularity of the relic card only helps lower the prices and increase the availability of these cards, for the most part.

Whether he's on the Expos or Angels, I love collecting Vlad Sr. relics and have amassed a respectable collection of them. Now, I can add an Angels' jersey relic and an All-Star game warm-up uniform card to my collection, thanks to Nate

Everyone go check out his blog, and thanks again for the awesome package, Nate. It's much appreciated.
Posted by Henry Blanchette at 9:26 PM