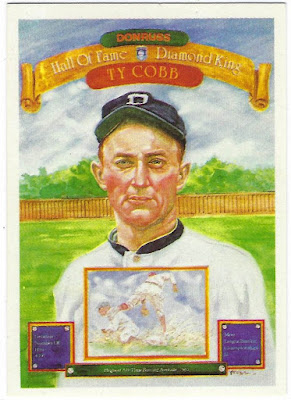 Pretty soon, I'm gonna have to make some sort of Google Doc/spreadsheet that lists which players I've already written top 5 cards posts for because I'm past the point where I can recite them all from memory.

An essential part of my blog from the very beginning, the top 5 cards series allows me to highlight my favorite cards of players that I collect, no matter the era in which he played in nor how large the PC is.

Along with the frankenset, a series that came to an end roughly a week ago, top 5 cards is an easy, go-to post for when I'm low on ideas, but over the last 2 1/3 years, I've encountered a few problems.

The first, my not knowing all of the players who I've covered, can be solved in 30 minutes or so by entering all of the names directly from the blog onto a spreadsheet. My next issue is slightly more complex; what to do as my player collections grow.

For example, I overviewed my top 5 Ichiro cards back in September of 2017 when I had way fewer cards and, thus, less variety than I have today. If I were to write an "updated" top 5 cards post on the future Hall of Famer, you'd definitely notice some changes.

I don't know if something like what I just mentioned will ever come to fruition, but it's something to keep in mind as I continue to cover this series. Today's subject is Ty Cobb, a PC with 45 unique cards. Without any further adieu, let's get started. 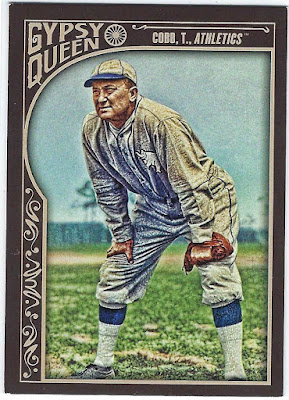 Virtually every Ty Cobb card that I own shows him as a member of the Detroit Tigers, and there's every reason for that. He spent most (22 years) of his 24-year career setting records and making history in Detroit, but many Baseball fans, including myself, forget about his 2 seasons in Philadelphia.

Cobb played for the Philadelphia Athletics from 1927-1928, managing 843 at-bats and a .343 average before retiring at the age of 41. Though he put up phenomenal stats with the A's, card companies, rightfully so, recognize his 22 other years in Detroit rather than 2 in Philadelphia.

With that being said, I applaud Topps' efforts back in 2015 when they featured Cobb as a member of the Athletics, creating a terrific card for the Gypsy Queen release.

Black and white photographed Ty Cobb cards aren't exactly hard to come by, so it takes a special style, picture, and set design to impress me. Fortunately, Fleer's 1999 Sports Illustrated Greats of the Game set checks all of these boxes with a simple, Stadium Club-esque card and a terrific shot of Cobb as well.

The picture quality may not be as stellar as, say, the Sporting News Conlon Collection cards, but the card, if nothing else, showcases an action shot of Cobb, something you rarely see of early-20th century ballplayers.

I also described the set design as "Stadium Club-esque" because of its simplicity which, in turn, allows for the photograph to shine. 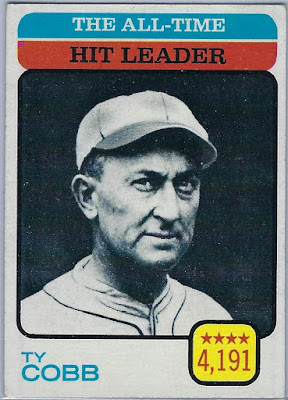 Cobb may not be the all-time hits leader anymore, but he was back in 1973 when Topps paid homage to him in their Flagship set.

The card is as simple as it gets; red and blue banners paired with a black and white photo and, lastly, a pop of color from the yellow surrounding the number 4,191 in the bottom right-hand corner.

You don't typically expect to see players like Cobb featured in 70s base sets just like it would be a surprise to see someone like Wade Boggs in 2020 Topps Flagship. Because of that, I was inclined to include this card in the top 5. 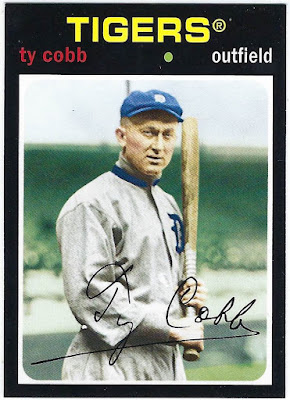 Cobb's 2012 Topps Archives card, given that it's made up of a black border, has held up pretty well over the last 7 years. With 1971 Topps set to be featured in Topps Heritage in a couple of months, I'm hoping that the cardstock doesn't allow for much damage to occur.

As for the card at hand, few Topps base designs would pair as well with a photo of Ty Cobb as 1971 Topps. There's something about the black borders that work wonderfully with the selected photo of the 1911 MVP. 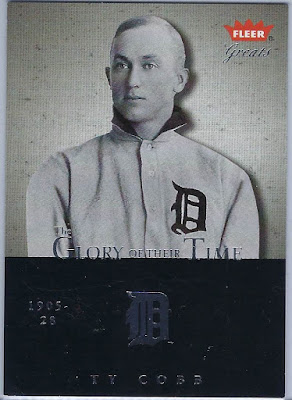 Speaking of 1911, the #1 and final card of this countdown also pays tribute to Cobb's legendary MVP season. Numbered out of 1911, Fleer created an overall unbelievable card back in 2004 with, besides their logo, just the colors black and grey.

Everything from the font choice to the ratios of colors works exceptionally well, and like the 2012 Archives card, this has held up over the past 15 years.

While I can sometimes say that one card narrowly missed out on the #1 spot, there was no denying that Cobb's '04 Fleer insert would reign supreme at the top spot.
Posted by Henry Blanchette at 6:53 PM