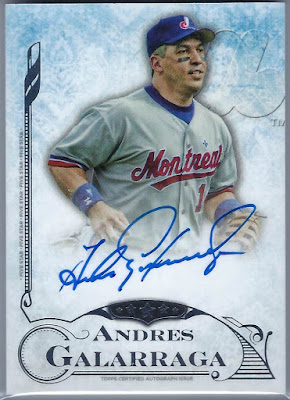 Once I (eventually) complete my Boston Red Sox and Chicago Cubs PC inventories, the next and final team I'll likely choose to collect will be the Montreal Expos.

I've always collected Montreal Expos cards, from individual players like Vladimir Guerrero to entire team sets like 1969 Topps (their inaugural season). I've watched documentaries, read articles, and done research all connected to one of the most intriguing teams in the game's history.

The Expos' history was brief, but they experienced multiple eras of Baseball cards, including the vintage and overproduction eras. The wide availability of Expos cards inspires me to consistently add new ones to my collection, even if I don't collect the player.

Because the Expos were around in the late 90s through the mid-2000s, card companies produced a surplus of relics and autographs, and Topps even produces a few to this day (i.e. the Galarraga auto at the top of this post).

Though I wish more than anything that the Expos never relocated to Washington to become the Nationals, I'm glad, if nothing else, that the eras in which they played in allowed for a wide range of Expos cards to be produced.

I've featured a handful of teams in the top 5 autos/relics series, but I figured it was time, thanks to recent additions, to show off the Expos. It might not rival my Red Sox or Cubs countdowns, but I love every one of the cards featured in this top 5. 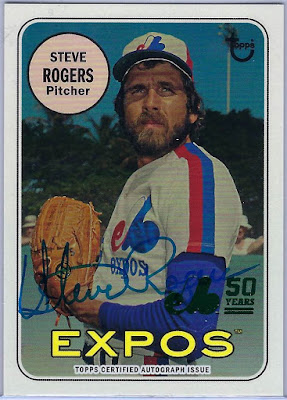 Aside from the outrageously long name, I like everything about this Steve Rogers autograph, especially the fact that I pulled it myself from a pack earlier this year.

Pedro Martinez spent 5 seasons with the Expos while Rogers was there for 13. Though a case can be made for both, if you take Martinez out of the equation, Rogers' career 3.17 ERA easily cements him as the greatest pitcher in franchise history.

The green foil means that the autograph is serial numbered (43/99), making it even more special of a pull. Topps also did a very nice job replicating the '69 set, something they haven't always done well in the past. 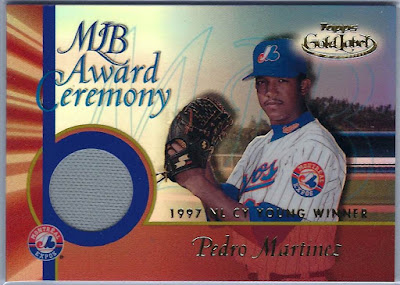 Speaking of Pedro Martinez, I'm ecstatic to have one, glorious relic featuring the 3-time All-Star as a member of the Montreal Expos. In all honesty, the design isn't my favorite, as I could do without whatever's happening on the lefthand side of the card.

That said, there aren't many Pedro Martinez Expos relics out there, and Topps did a respectable job of making the card emulate the Gold Label design. For that, I have no qualms about placing it in the top 5. 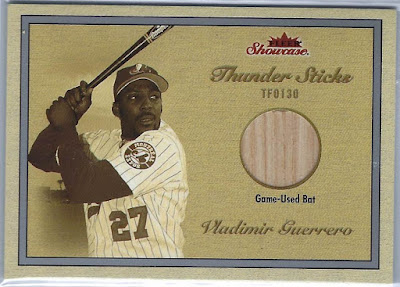 If I could choose 1 relic card set to complete, it very well could be the '03 Fleer Showcase Thunder Sticks set. It features some of the greatest sluggers of the early 2000s, and I have 2 of them in my collection, Guerrero and Manny Ramirez.

The sepia(?) filter pairs nicely with the bat relics and the font does so with the Fleer Showcase product as well. The print run of these cards (#/899), although high, is preferable to me than not being numbered whatsoever.

I don't believe the checklist of this relic card set is too high, and while I have higher priorities in my collection, I could scoop up a few of these sometime soon. 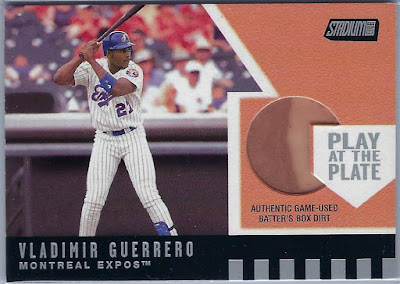 As of right now, this Vladimir Guerrero card above is the only game-used dirt relic in my collection. A pickup from the card show dating several years back, the dirt is certified as batter's box dirt "used" by the 2004 AL MVP.

The design is one of my favorites thus far as it perfectly emulates the Stadium Club brand. Because of the creativity behind this card, I prefer it to almost all Expos relics/autographs in my collection. 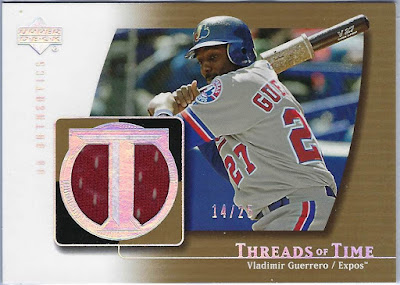 The design and the jersey swatch alone from Guerrero's 2003 Upper Deck Authentics Threads of Time Relic are enough to cement this card at the #1 spot on this countdown. The gold border is gorgeous and the design is picturesque for a high-end product like Authentics, I assume, was.

However, there's one other detail that sets this card apart from every single relic that I own. 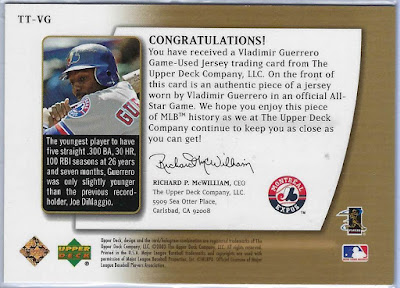 On the back of the card, Upper Deck reveals that this relic is from an official MLB All-Star game. Not the warmup/event relics from modern-day Update: an actual game-used relic from an All-Star game, though I don't know which.

Yeah, there's no beating that, but if anyone has any clue as to when the National League wore red jerseys in the All-Star game during Vlad Sr's tenure in Montreal, it would be greatly appreciated.

Posted by Henry Blanchette at 6:12 PM