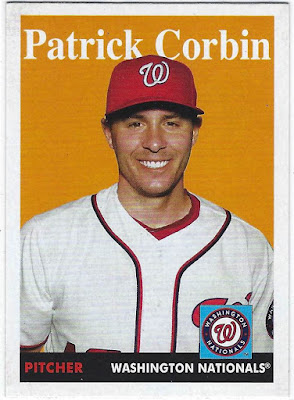 Like many others, I failed to even leave my house yesterday. Surrounded by family food, and crumbled wrapping paper, I spent the day making cookies and watching Basketball. For the 3rd consecutive year since I began blogging, posting on Christmas Day did not so much as cross my mind.

Yesterday was far from the only day of December in which I did not write a blog post. Today's will be  #12 out of 26 days, meaning I opted not to post more times than I actually sat down and put one together.

In case you haven't noticed, the past few months have seen a decrease in the number of blog posts from where I was 6 months and, especially, a year ago. While I used to aim for 24-25 posts per month, I've gone down to anticipating 18-20.

12 posts in 26 days, however, is too low, even for me. Hopefully, I can become inspired over the last few days of the year and finish up the year with a bang.

After all, I still want to rank the set designs from 2019, analyze how well I did in achieving my goals from the beginning of the year, and, potentially, review this entire decade in Baseball cards.

The last of the 3 ideas is quite ambitious, but it would hopefully make up for my lack of posting this month.

Now, let's shift away from that topic and get to today's post, a rack pack of 2019 Topps Archives that I found as a stocking stuffer this Christmas. The first card was #2, Patrick Corbin. Here's the rest. 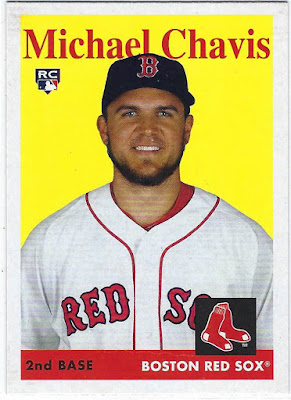 For whatever reason, Chavis' Topps Archives rookie card not only stands out to me as one of my favorite cards of the base set but one of the best Red Sox cards of 2019.

The simplicity of using primarily 3 colors (red, yellow, and white) makes for a gorgeous card that compliments the 1958 Topps design extraordinarily well. 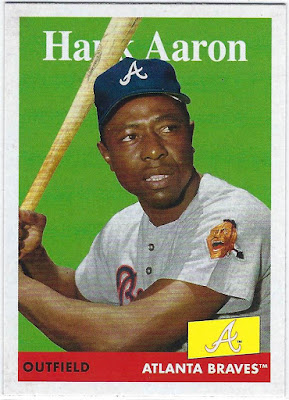 I purchased a fair amount of retail Archives upon its release, and I bought even more as they appeared in the dime boxes at the card show. As a result, I'm familiar with most of the base set, but that doesn't make this Hank Aaron card any less special.

The one thing that surprised me, however, was that Topps chose a picture of the 21-time All-Star with their old logo, as a shoulder patch, being incredibly visible. Considering the controversy, you'd think they'd just choose another image. 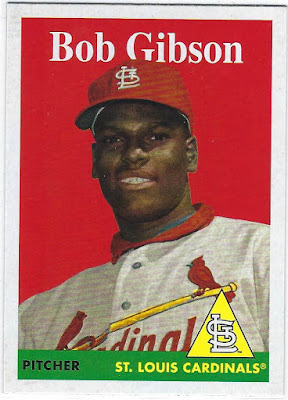 As if the background of this standout card could be anything other than bright red to go with the St. Louis Cardinals team colors. I'm not sure if they keep the colors consistent for each team, but I'm telling you that this card wouldn't be the same without the red background. 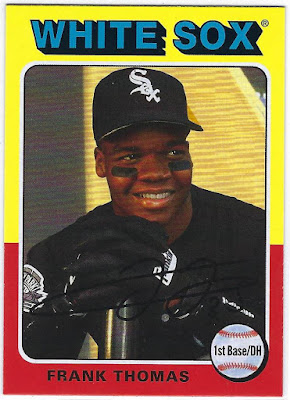 Up next on the list of players that I definitely need to start collecting is Frank Thomas, one of the most talented power hitters of all-time.

The problem is, for one reason or another, I never seem to find that many of his cards at the show or online even though he timeline of his career lines up with some of my gold tier player collections such as Ivan Rodriguez and Jeff Bagwell.

He also didn't play for a team that I collect avidly; as a result, I simply haven't amassed all that many Frank Thomas cards, and I'm skeptical as well about my ability to do so in the future. 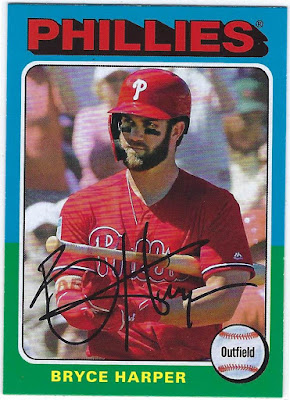 Even my dad, despite his feelings towards Bryce Harper, agreed that this was one of the better cards of the pack, an impressive feat when you consider the number of fabulous base cards we've pulled thus far.

Whereas some of the previous cards featured minimal colors and a plain background, Harper's makes use of red, green, and blue in addition to a background that features actual fans rather than just 1 bold color taking up all the space. 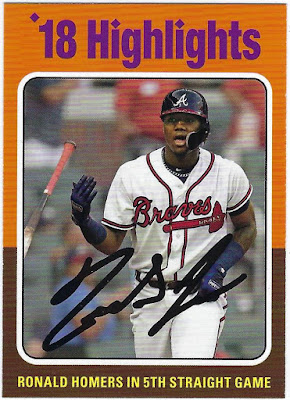 As much as I love how Archives has done their short-prints over the last few years, this Ronald Acuna Jr card is a duplicate, and my post from earlier this month outlined what I've been doing with duplicate cards.

That said, I can always save Acuna for a future frankenset. It'll be nice to have a non-Topps (or any other company) base card past spot #300 in the set. 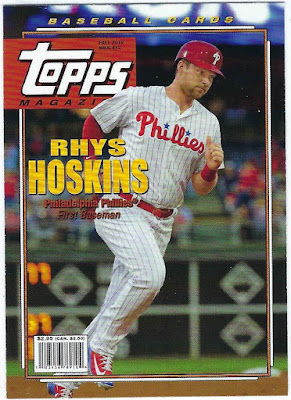 In addition to a couple of different SP designs, Topps recreated their 1990s magazine covers as an insert set in this year's Archives which was, in my opinion, a highlight of the 2019 release.

Rather than paying homage to another card design from decades ago, Topps decided to be creative and replicate magazine covers, a risk that I certainly appreciate and that they don't always due because of their monopoly. 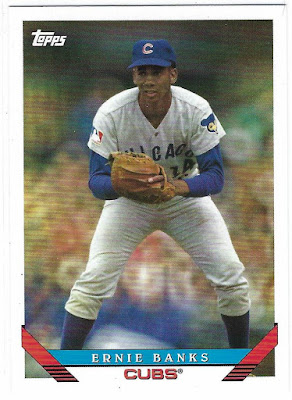 We've now reached the 3rd and final design and one that I didn't think would work that well in Archives: 1993 Topps.

Even though they exceeded my expectations in how past and present players would look in this design, some players, like Ernie Banks, just don't look right in an early 90s base set. 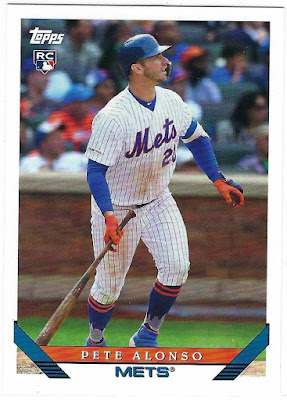 I can think of much worse ways to end the pack than with a terrific card of this year's almost unanimous NL Rookie of the Year award winner.

Though some of the 1993 cards looked a little off, the combination of the Mets home uniform with the simple design works the best out of all the '93 cards I've seen thus far.
Posted by Henry Blanchette at 5:48 PM