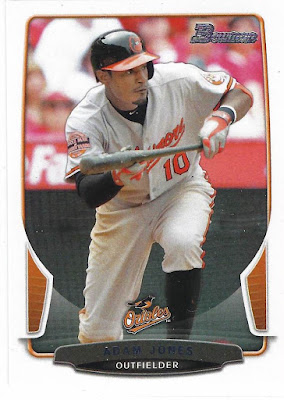 While most people are handing out candy while getting ready for game 6 of the World Series I'm doing this post and thinking about something I'm truly scared of.

The future of the Boston Red Sox.

They just lost their pitching coach, hitting coach, 3rd base coach, and manager in a span of a few weeks. There have been JBJ trade rumors along with uncertainties with new manager Alex Cora. And to top it all off, their farm system has become depleted having only 2 minor leaguers on the MLB top 100 prospects list.

To take my mind off the Sox I've decided to do a top 5 cards post on a division rival's player, Orioles star outfielder Adam Jones. I've accumulated a large total of cards of Jones, especially for a modern player. As of now, I have 42 cards of Adam Jones. Here are my favorite 5. 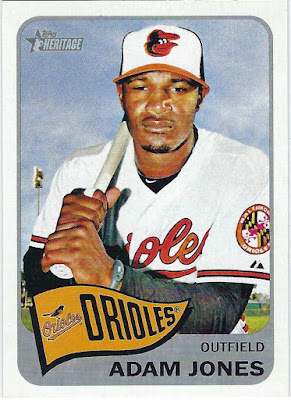 The recognizable pennants and colorful borders are what made collectors excited for 2014 Topps Heritage to bring back the iconic 1965 set back in 2014. Even though this card doesn't bring quite as much pop of color as some other cards, it still has redeeming qualities. The pennant looks great as usual and the sleek silver works well with the orange. The photo of Jones is okay, but he almost looks like he's upset or something based on his facial expressions. I like the set design as well as the pose, but Jones' sad face is what bumped this card down to #5. 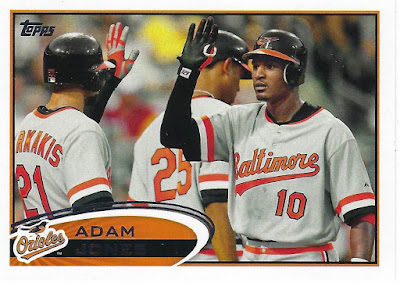 Rarely do I believe that Topps base cards are some of the best cards I have of a player, but an exception was made for Adam Jones' 2012 Topps card. He appears to be high-fiving teammate Nick Markakis after what I presume to be a clutch RBI hit. The O's are also wearing what I believe to be throwback jerseys in this card which is something I always like to see. Usually, the set design along with the photo blow me away, but this time it's just the photo which is why it didn't make it higher on the list. However, this spectacular shot of Jones cannot be ignored. 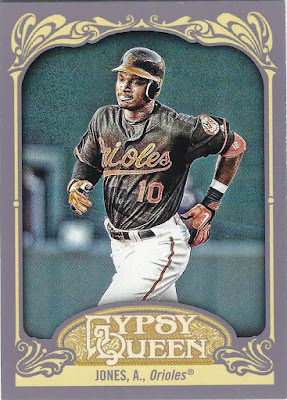 Here's another card from 2012 this one being a Gypsy Queen base card. The recognizable purple borders are paired up with a photo of Jones running the bases in the Orioles' black jerseys which proves to be a near-perfect color combination. There's not much else to say about Gypsy Queen that I haven't already said, however, this card is definitely above average for the set. The set is very nice and the colors pop that's all there is to it. The blurry background is what set this card back, but it's still one of my favorite cards of Adam Jones. 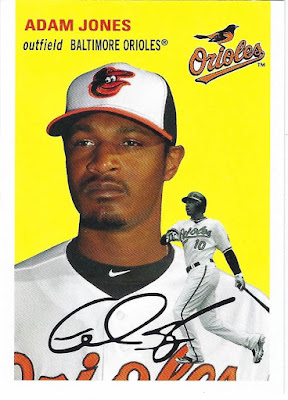 Soon after the revival of the Archives brand, Topps revived one of their oldest sets in the 1954 design. This set is one of the most intricate as it features the team logo, a headshot of the player, a black and white action shot along with a fake signature. And somehow all of this comes together and works. I usually detest fake signatures, but I'm convinced that they work on this card. The 2 perspectives of the player in this set is a very good concept and something that I think that Topps should do again sometime soon. I also like the yellow background because of how much it reminds me of the days Topps took risks which already seems like a while ago. 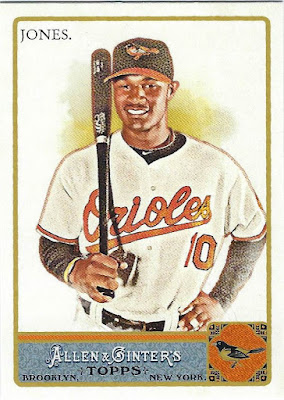 I've said openly for years that I'm not a fan of Allen & Ginter due to how plain it can be. However, the 2011 set is by far my favorite set in the brand's history. It's definitely an outlier as it looks way different than any other A&G set with elements of color that's not in the background. It's almost like they decided to make the player the portrait and the bottom part the painter's signature. It looks almost like a painting and this set delivers in ways that Allen & Ginter never did before. I love almost everything about this card even down to the player's name in the top corner, which is why it barely snagged the #1 spot on the list.

Even though Adam Jones, the Orioles, and the Red Sox won't be playing game 6 of the World Series tonight I needed to take my mind off Boston Red Sox craziness. Now I have an hour to kill until the Fall Classic returns to LA.


Posted by Henry Blanchette at 6:54 PM