In honor of the Astros making the World Series for the first time since 2005, I've decided to do a top 5 cards list of my favorite Astro of all-time, Craig Biggio. And don't worry Dodgers fans, I'll be doing a top 5 cards post for my favorite Dodger tomorrow.

Biggio played every year of his 20-year career for the Houston Astros. He, along with teammate Jeff Bagwell dominated in Houston and lead them to their 2005 pennant. I'm sure Astros fans are hoping that this World Series goes better than when they were swept by the White Sox back in 2005.

My Craig Biggio card collection is currently at 32 cards. I've chosen my favorite 5. 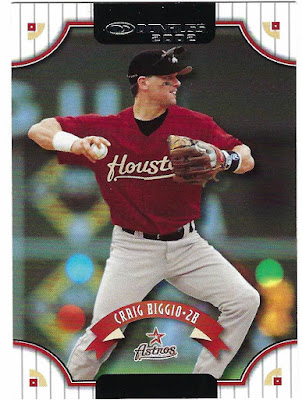 Sometimes all it takes is a simple set that's not overly complicated to create a top tier card, and that's what happened with Biggio's 2002 Donruss card. The borders are basic grey lines with little specks of colors corresponding to the team colors. The set also includes a banner with the player's name and the team logo below it. The card is mostly centered around the picture and this one features Biggio in the dark red uniforms that the Astros wore before joining the AL West. It doesn't try to do too much, considering that it's basic Donruss but it does a nice job. It's a basic card that combined with a few small details make a card worthy of the #5 spot. 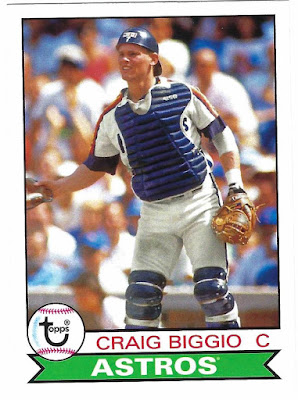 Biggio's 2016 Archives card was up against some steep competition which is why it didn't make the top 3 on the list. Nevertheless, this card is one of the best from 2016 Archives and it's easy to see why. The card features one of the best Biggio photos I've ever seen. The shot was taken from early playing days as a catcher, and Archives couldn't have chosen a better set to show Biggio at that position. The photo is one I haven't seen before which I appreciate. But it's also the best photo on any card of Biggio I have. If it was a better all-around card it would've made it higher up on the list, however, it's by no means a letdown. It just narrowly got beat out. 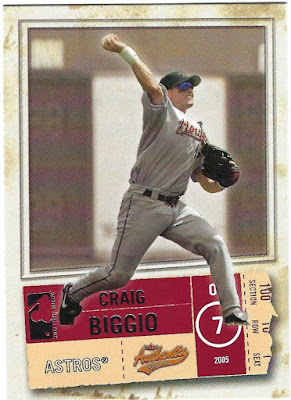 The Fleer Authentix set was all about creating baseball cards that, at the same time looked just like tickets to a baseball game. While they didn't do a great job of it in the 2005 set, they did do a phenomenal job of creating a stand-out card. The ticket doesn't take up the whole card, but instead, the action shot of Craig and the vintage-style borders and background help the overall uniqueness of the set and specifically the Biggio card. I do appreciate the ticket and I think they did a decent job with it, it's just not my favorite part of the card. However, it's a set like this that cause me to miss Fleer. I really wish they'd make a comeback like they once did, but with Topps' exclusive licensing rights running through 2020 it seems unlikely. 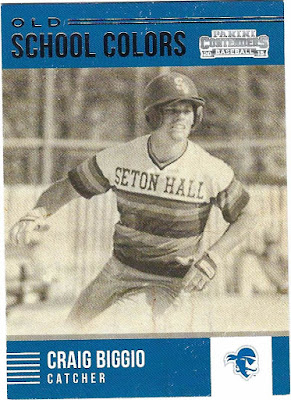 While Panini doesn't have MLB licensing, they do take the extra step to make their sets work and one of those is their Old School Colors insert set from 2015 Contenders. It shows some of the top players in the game, both retired and current on their college team which for Biggio happened to be Seton Hall University. The concept is very cool, and the overall execution of the idea is well-done. I especially enjoy how they included the pictures in black and white. Almost any set with some black and white cards is bound to be good, but the Seton Hall blue looks fabulous with the black and white photo, causing this card to be one of my favorites from the set that I've ever seen. 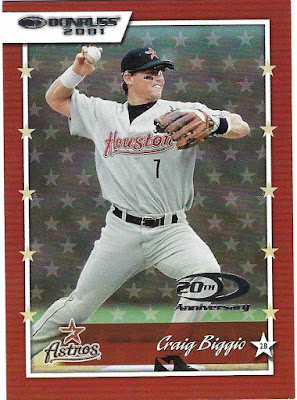 Donruss' 20th-anniversary base set brought with it a sleek silver stamp on the base set and a bunch of stars in the background. These things shouldn't work, especially on a baseball card, but they do and I have to applaud Donruss for taking this risk. The borders match the Astros red color in their logo while the stars throughout the card have a gold color, which matches the Astors gold. It's almost like the set was made for Craig Biggio and when you get that type of feeling with a card, it's bound to be good and this set delivers. The red is definitely the star of the card as it matches up well with the Astros and their players, and the photo chosen of Biggio works very well. All of these factors aren't easy to find in one card, and this card has all of these features. That's why it got the #1 spot on my list.


Posted by Henry Blanchette at 6:03 PM