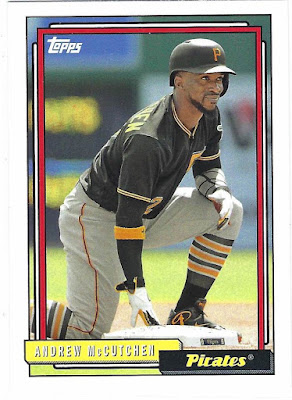 McCutchen has been one of the most dominant players of my time since he made his major league debut back in 2009. He's spent his whole career for the Pittsburgh Pirates, one of my favorite teams, and has proven himself to be a possible future Hall of Famer.

I've been collecting McCutchen for quite some time now and I have amassed exactly 38 cards of the veteran outfielder. Here are my favorite 5. 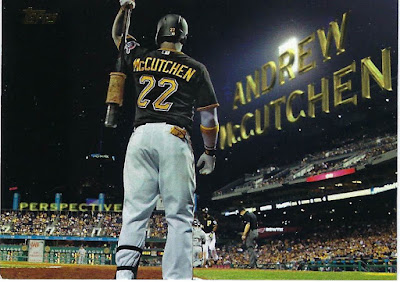 These inserts from 2016 Topps and Topps Chrome were some of the best cards made by Topps last year. These photo-centric cards feature the player's name in big gold letters along with a picture of the player that takes up the whole card. This shot shows McCutchen in the on-deck circle at a ballpark that I believe to be PNC Park, but I'm not too sure. The insert set was a very cool part of Topps Flagship last season, and every card looks nice especially the McCutchen. It's just too plain to make it further up on the list. 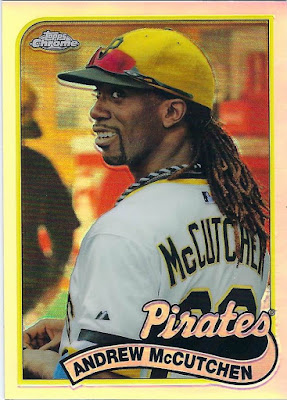 Topps went all out in 2014 regarding their tribute to the 1989 set. Topps is notorious for doing tributes to sets that collectors didn't like, at least not nearly as much as Topps does. These, however, I really like. Each card is a refractor which helps them stand out in regards to the rest of the set. The Chrome cards look amazing and did the 1989 set justice. Topps did a nice job recreating the cursive team name writing, even if they didn't use the correct colors. This McCutchen picture was taken from the dugout, which is different from the usual batting stance card which is something else I like. 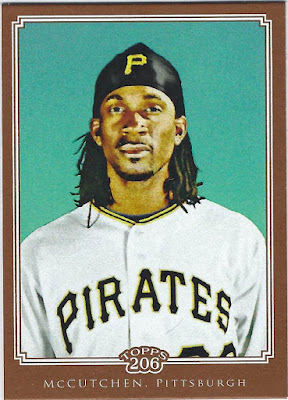 Recognizing how fond many card collectors were of the 2002 Topps 206 and 2003 Topps 205 sets, Topps brought back a similar set in 2010 that had a similar feel of the previous 2. The base set features white borders, but it was these brown bordered cards that stood out and the McCutchen was able to make #3 on my list. The brown along with the teal background on the card make a terrific combination. The picture of Cutch isn't too shabby either and gives the card the old-fashioned feel Topps was looking for. However, the new-school cards are what took over this list. 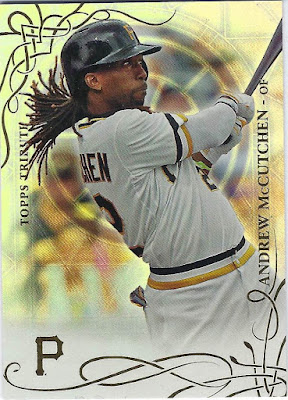 While there may have been a recall of cards from this set due to faded autographs, the base set still looked better than it had in years. The design in the top left and bottom right reshaped what I thought of Tribute and the images that were chosen looked very nice. I don't have much of this set considering that I am a low-end collector, but I have acquired a handful of these cards from the show and I have yet to be disappointed. I feel like this set and specifically this card surely delivered. But one other high-end product from a few years back took the #1 spot. 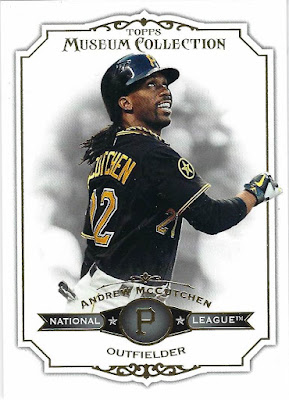 This may be my only card from 2012 Topps Museum at the time, but it won't be forever. This is by far the greatest Museum set ever created solely because of the simplicity and how they pulled off the set. The all-white surprisingly works with the card, but is contrasted with the silver aspects and unique to this card with the black jersey. It's a very balanced card with many good aspects that all come together to make a phenomenal base set, but I know no one buys Museum for the base set anymore, or ever. I'm looking to get more of these, so if anyone has some to trade please let me know.

Andrew McCutchen is one of my favorite current players and even though he isn't what he used to be, I still enjoy seeing him play and play well. I hope he's around for many more years, enough to update this list with new cards by the time he retires.


Posted by Henry Blanchette at 4:52 PM