2 More Treasures From The National 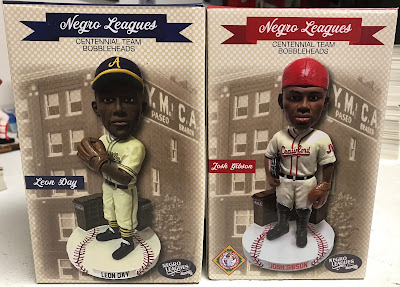 When I arrived home from The National in Chicago a couple of weeks ago, I was faced with the daunting task of organizing and storing all of the cards that I brought back with me. After writing the blog post for a particular group of cards, I put them away in binders and/or boxes.

This routine continued for around a week as I wrote 7 posts recapping my purchases at the show. It took a significant amount of time, but last week, I completed this mini-project and put all the cards from The National where they belong.

This isn't the time to get into the topic of organization, so I'll save that for a potential post later on. Still, with all the cards that I needed to properly store, I completely forgot about 2 treasures that I picked up at the show.

At any given Baseball card show, 99% of what I purchase is cards while the remaining 1% is memorabilia. It's not that I don't like adding unique items to my collection. Rather, I usually choose to focus primarily on cards, and memorabilia is often over-priced anyways.

The 2 bobbleheads at the top of this post, however, were far from over-priced, and they're exactly the type of memorabilia that I'm looking for. Most of the walls in my card room consist of Red Sox and Cubs items, so bobbleheads are my best bet when I'm hunting for pieces of memorabilia.

One of the many vendors that my Dad and I spoke with at the convention was from the Negro Leagues History foundation. He had a ton of unique items, ranging from bobbleheads to a Centennial Team postcard set (which we also purchased).

Many of the products were discounted as a show special, so we bought 2 carefully-chosen bobbleheads (we wanted to be sure that everything would fit in our luggage so we didn't buy anymore). 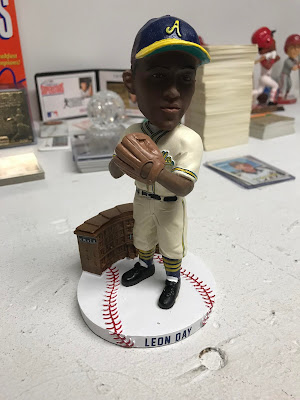 Our first choice was a little unconventional, but there's a distinct reason behind our decision to purchase a Leon Day bobblehead. I don't believe I've shown this card on the blog before, but I actually pulled an autograph of his from the 1994 Ted Williams Card Company set.

The box was only $15 and is dated well before the days of certified autos, so you can imagine how thrilled I was to land that card. Now, I have a beautifully-done bobblehead to pair with the on-card auto. 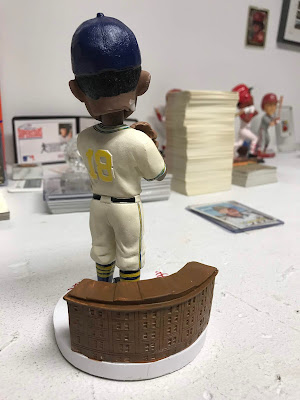 The vendor had 1 bobblehead of each player outside of the box and on display, so I got to examine the piece of memorabilia before I brought it home. The attention to detail is absolutely superb, more so than any other bobbleheads that I've ever seen before.

I'm not usually this captivated by Baseball cards or memorabilia, but I've never seen anything quite like these bobbleheads before in my life. They're just so unique that I can't help but regret not buying more when I had the chance (the vendor sold out on Saturday, August 5th). 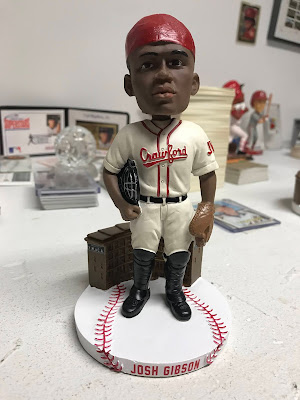 While we pondered buying the Leon Day bobblehead for a little bit, neither one of us hesitated in buying one of Josh Gibson, one of the most iconic players in the history of the Negro Leagues.

Like the Leon Day bobblehead, a certain card in my collection inspired my Dad and me to buy one of Josh Gibson as well (we have a Josh Gibson stadium seat relic from Griffith Stadium from the 2005 Bowman Heritage set). 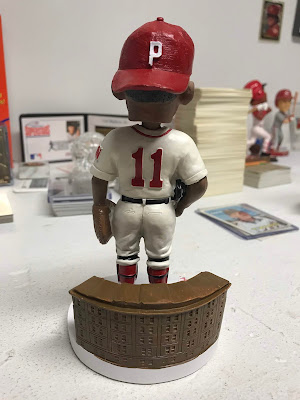 Whoever designed these bobbleheads put a ton of effort into capturing each and every detail. I can't say enough positive things about these beautiful pieces of memorabilia. The design is great, the boxes feature information about the player, and they're perfect and unique additions to my bobblehead collection.

Most importantly, they shed light on an important and oftentimes overlooked part of Baseball history. Guys like Gibson, Day, Satchel Paige, Ray Dandridge, and countless others impacted today's game in many ways, even though most Negro League stars never had the chance to play in the MLB.

I just hope they'll be back at the show next year because I'd love to pick up even more collectible items created by this fabulous foundation.
Posted by Henry Blanchette at 6:15 PM