I Guess I Didn't Miss Out 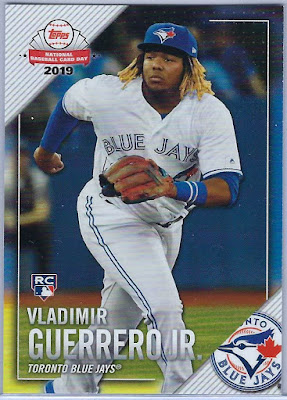 Since I started blogging back in August of 2017, I've celebrated my blog anniversary right around National Baseball Card Day. Both my first ever post as well as my 1-year post featured packs from this promotional event, so it's always been a major part of the blog.

I wasn't able to, however, continue this tradition, or so I thought, in 2019. The only participating Baseball card shop near my house was closed for vacation on August 10th, and I didn't trust that my local Target would stock the NBCD cards, to begin with.

The realization that I wouldn't participate in 2019 National Baseball Card Day was disappointing, but I moved on, nonetheless. With stacks of cards that needed to be put away, I made a couple of trips to my LCS last week once the owners returned from vacation.

One of those visits happened to be last Saturday, the 17th when I stopped by for a box of Ultra Pro sheets. Unbeknownst to me, card shops were still giving away free packs on the 17th for the 2nd installment of National Baseball Card Day.

While I knew about the Vladimir Guerrero Jr card which could only be acquired by spending $10 or more on Topps products on that particular date, I didn't realize that the exclusive packs would also be available.

After some deliberation, I bought 2 packs of Heritage High Number to get the Vlad Jr card. This forced me to break my "I'm not buying cards for at least a month because of The National" rule, and I did horribly with the Heritage High # packs.

But it's okay because I got my hands on an exclusive Vlad Jr rookie card even though I wish I'd just handed the owner $10 for the card and not suffered through 2 awful packs of Heritage.

Anyways, I walked out of my LCS with 2 NBCD packs, 2 Heritage High # packs, the Vlad Jr card, and a box of Ultra Pro sheets. After all, you can't really beat free cards.

To keep this post short, I'll recap the first pack today while saving the 2nd one for tomorrow. 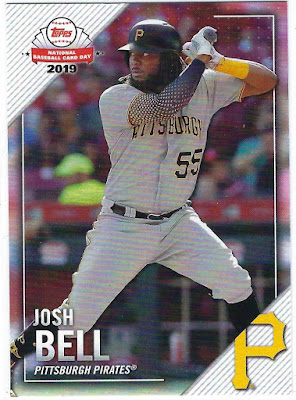 I already like the 2019 card design more than the past 2 years during which Topps has done this promotion. The 2017 cards were over-complicated and featured silver foil names, something I cannot stand as it's near impossible to read. The 2018 design was okay, but it was far too simple and didn't do much to stand out.

This time around, the cards are still on the simple side, but this design is far more effective than years past. The Topps NBCD logo is a new addition, and the cards are just modern enough.

For whatever reason, the full-bleed photos from 2018 didn't work for this promotion, so I'm glad Topps added the 2 logos in the top left and bottom right corners. 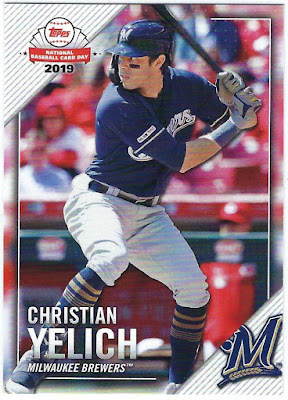 During each of the 3 years that Topps has done this promotion, the checklist (excluding cards like Vlad Jr's) has consisted of 30 cards, one from each MLB team. For example, the Brewers, have their superstar player, Christian Yelich, featured while other clubs, like the Marlins, showcase Jose Alfaro.

Because each club has only 1 spot in the checklist, I'd be interested to see if and how their 1 "star player" has changed over the years. Some guys have probably maintained their spot for years while others, like Ronald Acuna Jr, are featured for the first time in 2019. 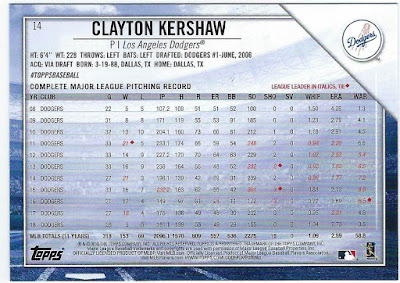 The 2019 NBCD set diverges from the past releases in that the cards feature full stats on the back. In the past, the card backs included a quick blurb about the player, but I'm always one for complete-stat card backs, and it's nice to see them, even on promo cards.

I couldn't think of a better example for the card backs than Clayton Kershaw. It's pretty unbelievable that throughout of his 11-year career, he's led the NL in ERA 5 times.

Having complete stats is definitely a plus, but other than that, the card backs are pretty standard. 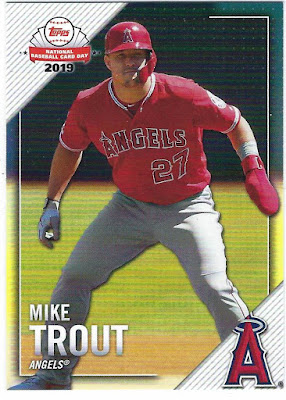 In the past, Trout's card has only been available with a qualifying purchase, so I was stoked to find his card in one of my 2 base packs. I'll take absolutely any card I can get of the 8-time All-Star, from a low-end base card to a high-end autograph.

Back to this specific card, I'm not sure what's going on with Trout's left hand. There seems to be some kind of cast or something on it, but I can't pinpoint what it is. 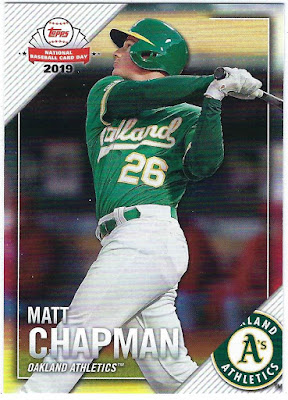 After taking this trip to my LCS, I relaxed and watched the Astros battle the Athletics last Saturday afternoon before the Red Sox game at 7:00.

Through this game, I learned a lot about 2 talented teams, one of which seems destined to win the AL West while the other has a solid shot of winning a Wild Card spot.

I don't get the chance to watch a lot of west coast Baseball, so it was interesting to see how the Astros and A's players are doing, particularly Matt Chapman who's shaping up to be one of the most well-rounded players in all of baseball.
Posted by Henry Blanchette at 5:50 PM