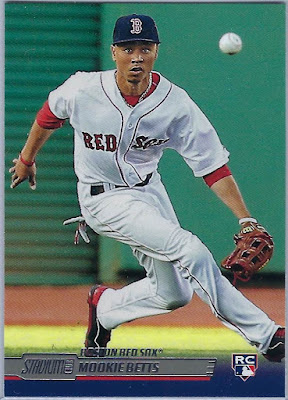 After writing 6 posts recapping my memorable experience at the 2019 National Sports Collectors Convention, I've reached the end of this mini-series. Today will be my final post overviewing what my Dad and I brought back from the show in Chicago.

Baseball card show recap posts, no matter how large or tiny the event, are some of my favorite things to write. In addition to attending the shows and having a blast while I'm there, I get to relive the experience, to a certain extent and share it here on the blog. It's almost like a continuation of the show itself.

All things considered, I can't say whether the 2019 National was better or worse than the 2018 show. The Chicago show was definitely larger than the Cleveland one, but I ended up bringing back around the same number of cards from what I can remember.

I will say that I made more extravagant purchases at this year's show which you'll see later on in this post. There was no booth allowing customers to fill an 800-count box for $50 like there was last year, so I guess I valued quality a tad more than quantity this time around.

The Betts rookie card from Stadium Club is the 2nd Mookie rookie in my collection ('14 Chrome Update was the first). In addition to the Stadium Club rookie, my Dad and I came together and purchased 5 spectacular cards; the best of the best from our time in Chicago. 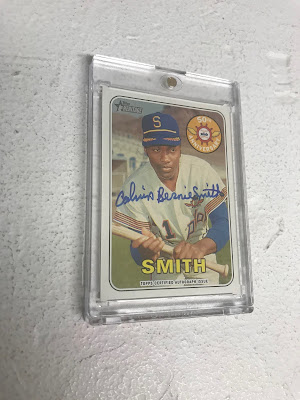 When Cardboard Connection first posted about 2018 Topps Heritage, I was ecstatic to learn that the Seattle Pilots would have a mini autograph set. However, the pack odds (1:3,464 packs) were unbelievably low.

When I, unsurprisingly, didn't pull any out of the packs that I opened, I gave up my hopes of landing one of these rarities. That is until one caught my eye as I was peering through one of the thousands of display cases at the show. 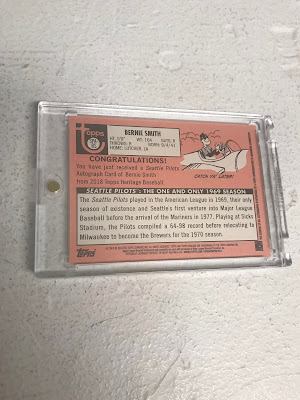 I'd never heard of Bernie Smith before in my life, and it's a little absurd to pay decent money for an autograph of someone you're not familiar with. However, my Dad and I collect anything Seattle Pilots. Now that we've completed the 1969 and 1970 Topps team sets, it was time to move onto the oddballs.

Topps Heritage autographs are absolutely beautiful, and Bernie Smith's Pilots card is no exception. Given what the other players' autos are going for on COMC, I'm glad that I was able to land this card at a reasonable price. 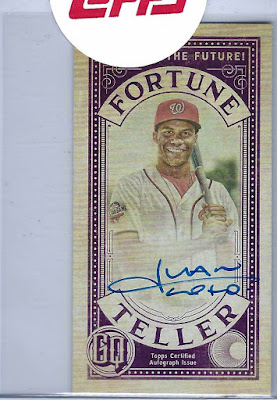 Now that Bryce Harper's moved onto Philadelphia, the Nationals' next franchise player is 20-year old Juan Soto, one of the top tier rookies from 2018. I didn't even plan on purchasing one of his autographs, but the price on this 2019 Topps Gypsy Queen Fortune Teller auto was too good to pass up.

I have my reservations when it comes to Gypsy Queen, but I've always praised the Fortune Teller inserts. I didn't even know that these had autographed versions until I laid eyes on the Soto card. Roughly 10 minutes later, I bit the bullet and added this beauty to my collection. 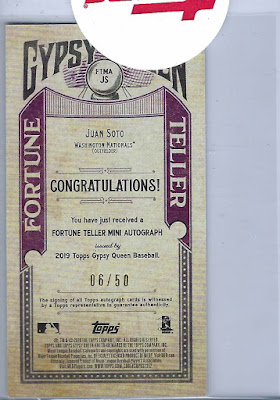 Since the card was in a display case and I never thought to ask, I didn't notice that the card was serial numbered (#/50) until I forked over the money. The low numbering makes this beautiful insert auto even more special, not to mention it's signed on-card as well.

The Soto card gives me 4 autographs of the big-name rookies from last season (Devers, Torres, and Hoskins). The fact that there are still 5 stellar rookie autos from 2018 out there that I don't have (Albies, Acuña, Ohtani, Andujar, Buehler) highlights how historic the 2018 rookie class was.

Nonetheless, I couldn't be happier with the card as well as its price. With all the shiny refractors and parallels out there nowadays, it's nice to take a break, every now and then, with a simpler card that's still a standout. 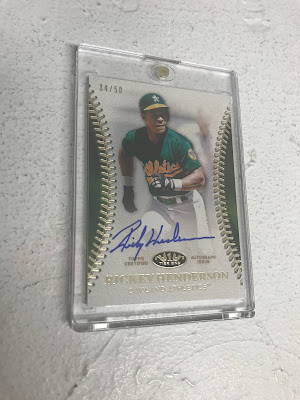 As much as I believe Juan Soto could be the next superstar of Baseball, the Hall of Famer autographed cards are where it's at when it comes to a show like this.

Soto is still in the process of establishing himself as one of Baseball's best players, but a guy like Rickey Henderson has already accomplished that 10 times over. I originally wanted a different autograph of the stolen base king, but it was scooped up by some other collector before my Dad and I got the chance to return to this vendor.

However, I can't really complain about a Topps Tier One autograph of Rickey Henderson, especially since he's shown as a member of the Oakland A's, and the signature is on-card. Truth be told, I wouldn't have settled for a Henderson auto on any other team.

Like the Soto, this card is serial numbered out of 50, but it's Rickey's gorgeous signature that sets this card apart from most other modern autographed cards.

As fabulous as the Henderson auto is, the Tier One design leaves a little to be desired. Thankfully, this next hit is absolutely breathtaking. 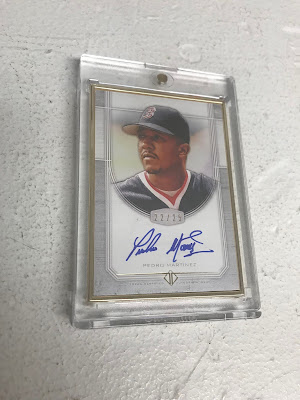 Never in my life did I think that I'd have my very own Topps Transcendent autographed card due to the exorbitant price for a case of this product.

These portrait cards are a part of Topps' most expensive product, yet I was able to find this gorgeous Pedro Martinez auto for less than the average price of a hobby box.

The artwork is like an upgraded version of Topps Gallery; it's absolutely stunning and expertly created. As for the autograph, it's legible (something you can't say about most players' signatures today) and is signed beautifully. Seriously, there's nothing about this card that I can critique.

The gold frame highlights just how high-end the Transcendent product is, yet, somehow, the dealer was able to sell this particular card for an incredibly reasonable price. Needless to say, it'll be a fantastic addition to my Red Sox PC.

Although I was involved in purchasing each of the autographed cards above, I had nothing to do with the last card from the trip to Chicago. I present to you the greatest card from The National. 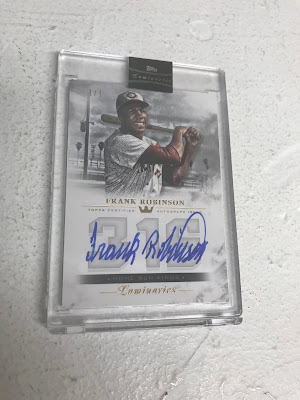 This is a Frank Robinson autograph.

This is a Frank Robinson autograph from Luminaries, another high-end Topps product.

This is a Frank Robinson autograph from Luminaries, another high-end Topps product, serial numbered 1/1.

This is the greatest card that my Dad and I brought back from The National. 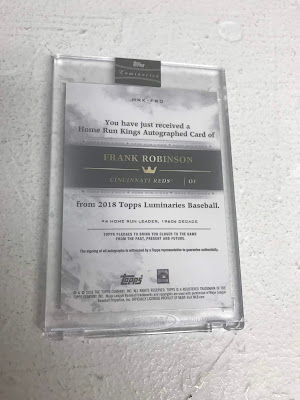 Like I said, I was not involved whatsoever in purchasing this 1/1 autograph. In fact, I only knew about it when my Dad showed me the encased card midway through the day on Thursday, our first full day at the show.

I'm not familiar enough with Luminaries to know what makes this a 1/1, but I do know a little bit about the product. It's a very high-end set that comes with 1 encased autographed card, numbered to 10 or less, in a box.

I would never have thought that a Frank Robinson auto would be our best pickup from The National. Because we're such avid Cubs and Red Sox fans, I would've expected something from one of those 2 teams.

The more I study this card, however, the more impressed and intrigued I am. Any 1/1 card is automatically special, but a 1/1 autograph of one of the greatest sluggers of all-time is truly outstanding.
Posted by Henry Blanchette at 6:42 PM