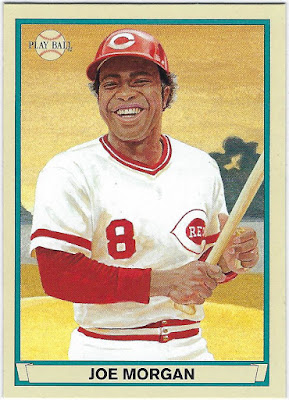 Guys like Mookie Betts, Jose Altuve, and Mike Trout are still some of the best players in the game, but it's become acceptable for players to bat around .230-.240 so long as they rectify that batting average by hitting 30 or more home runs.

2017 and 2018 were historic years for homers, and 2019 is shaping up to be the same. Each year, the total number of dingers rises along with the number of strikeouts. In exchange, there have been fewer hits (singles, doubles, and triples), and players' batting averages have, overall, gotten worse.

I won't get into whether I believe the obsession with home runs is beneficial for the game or not. However, there was a time when the contact hitters outnumbered the power hitters, and there were far more multi-tool players in the game.

One of the most talented of these players was Joe Morgan, an essential part of the Big Red Machine during the mid-1970s. Morgan made the All-Star team for 8 consecutive seasons with the Reds from 1972-1979.

Throughout his 8 years in Cincinnati, he hit .288 with 152 home runs, 612 RBI, and 406 stolen bases. Besides the Reds, Morgan played for the Astros, Giants, Athletics, and Phillies, though the best seasons by far of his 22-year career were with Cincinnati.

I've been collecting cards of Joe Morgan as well as other essential members of the Big Red Machine (Bench, Rose, Perez, Concepcion, and Foster) for several years.

At 92 cards, the Joe Morgan PC is almost at gold tier (100 cards) status, so I figured this was the perfect time to write this top 5 cards list. 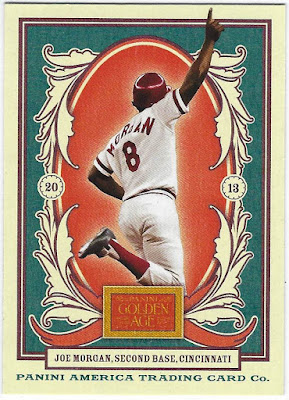 This is one of my only cards from the 2013 Panini Golden Age set, a product that's virtually non-existent in the dime boxes at the shows I attend. Similar to Upper Deck Goodwin Champions, Panini Golden Age combines sports figures with pop culture icons.

One of the athletes that they chose for the '13 release happened to be Joe Morgan. Panini, likely in an attempt to hide the logoless helmet, chose a sensational photo of the 2-time NL MVP award winner and paired it with a gorgeous vintage design.

A revive of the Golden Age brand is highly unlikely, though it would be interesting to see what Panini could make of this set if it was a part of the Chronicles product. 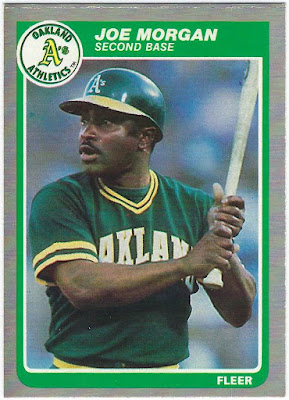 Morgan spent just 1 year of his career with the Oakland Athletics, so it stands to reason that there aren't many cards of him on the A's out there. The only one in my collection is this beauty from 1985 Fleer, my favorite design in the brand's history.

Truth be told, there's not a single color in the '85 Fleer set that doesn't pair beautifully with the silver borders. I absolutely love the combination of light green with grey along with the simple shot of Morgan at the plate in an Athletics away jersey.

I don't know how expensive is it to purchase this set online, but I might just go for it when my birthday or the holidays come along to have a complete version of this gorgeous release. 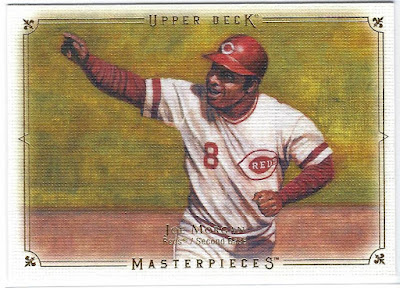 Oftentimes, I find that Topps dominates the majority of my frankenset and top 5 cards posts, so it's refreshing to see other brands represented.

So far, Panini, Fleer, and Upper Deck have appeared on my top 5 cards list for Joe Morgan, the latter of which is a gorgeous painted card from 2008 Upper Deck Masterpieces. This set went the same route as most art sets (Gallery, T206, National Chicle, and Turkey Red) and disappeared after a couple of years.

Thankfully, the dime bins, particularly those at my LCS, helped me to appreciate this fine product and all of its stellar cards. 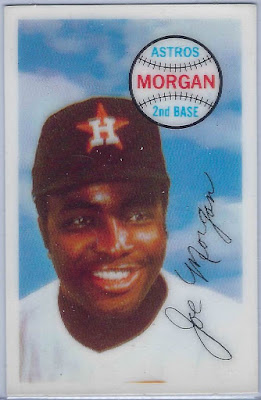 The newest addition to the Joe Morgan PC came my way via The National. One of a few cards that I have of the 5-time Gold Glove award winner on the Houston Astros, this beauty from the 1970 Kellogg's set was a bargain back when I bought it in Chicago.

Virtually everything about this card, from the Astros cap to the blue sky background and even the facsimile signature, is so cohesive together. The '70 Kellogg's design is incredibly simple, and that's exactly what makes this card such a standout. 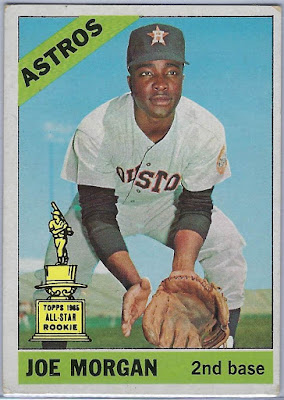 I keep my relics/autographs and graded cards in separate boxes than my player collections, so I don't count the Joe Morgan rookie card that I have as a part of his PC. This allows me to focus on the other cards when it comes to making the top 5 cards list, like the 1966 Topps card above.

I absolutely love the old-school Topps All-Star rookie trophies from the 60s, and it's a shame that they won't be replicated in Heritage for much longer. In addition to the rookie cup, the Astros uniform and Morgan's pose elevate this card to the #1 spot.
Posted by Henry Blanchette at 10:14 PM