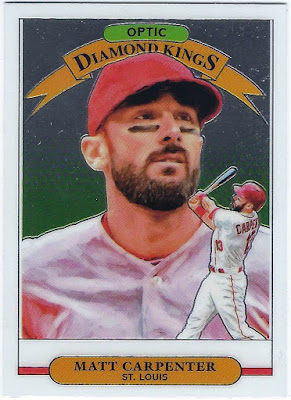 Last season, there were about 9 rookies that were, in their own right, Rookie of the Year caliber players. These 8 position players (Devers, Hoskins, Andujar, Torres, Ohtani, Acuña, Albies, Soto) and 1 pitcher (Buehler) created a buzz surrounding both the game as well as virtually all Baseball card releases.

These 9 stars plus a few other respectable players highlighted one of the greatest rookie classes in MLB history. Furthermore, 2017 featured several big-name rookies, particularly sluggers Aaron Judge and Cody Bellinger.

Though a reasonable part of this hobby has to do with luck, the past few rookie classes featured so many stars that it became a little easier to pull monster hits out of packs, both hobby, and retail.

I certainly had my fair share of luck when it came to 2017 and 2018 products, and a significant portion of that luck was thanks to the sensational rookies. Last year, in particular, was unbelievable in terms of the incredible cards that I pulled.

My luck in the past is a major reason as to why I'm disappointed with my wax purchases in 2019. Topps and Panini have featured the big 4 rookies (Eloy Jimenez, Vlad Jr, Tatis Jr, and Pete Alonso) in almost every product, but I haven't come up with a major hit or even a numbered card of any of these guys so far.

I'm not sure if the pack odds are making things more challenging or if my luck's run out, but 2019 hasn't been great as far as hits are concerned. Don't get me wrong, I still love the products that I purchase and the cards that I pull. It's just weird that I haven't had much luck when it comes to hits. 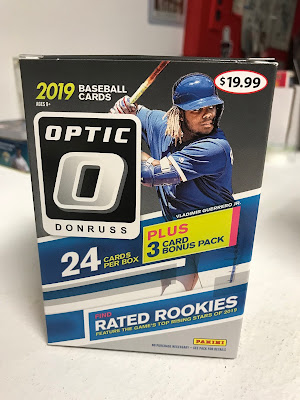 This hasn't stopped me, however, from buying retail and even the occasional hobby box, like I did with this blaster of 2019 Panini Donruss Optic.

The most important factor is what I think of the set and its design, but I also take into account whether I'll get my good luck back when I purchase a box of cards.

Now that Panini Prizm Baseball seems to be back for good, Optic needs to do a lot to impress me enough to purchase even a rack pack. However, I opened some Chrome at The National, and Heritage High # has never yielded anything worth mentioning, so Optic seemed like the best bet when I was at Target earlier today. 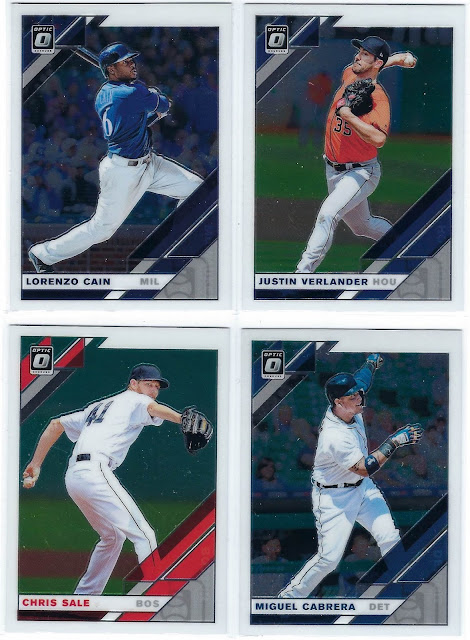 Part of the reason why I chose Optic is that I'm a sucker for chrome cards. Each year, I'm captivated by Topps Chrome not out of the possibility of pulling a big-name auto because then I'd be buying boxes of every single set.

Rather, Topps does a phenomenal job with Chrome every year, no matter what the Flagship set looks like. Panini does the same thing with Optic, though I've never been too fond of any Panini Donruss base set.

If nothing else, the base cards allow me to add to my player collections and give me a chance to form an opinion on Optic, a set I haven't opened in over 2 years. 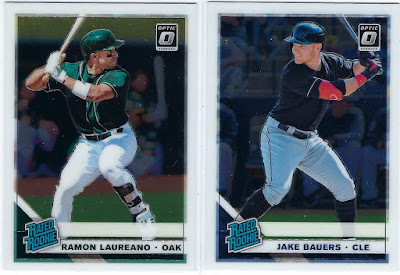 Unfortunately, when it came to that major hit/parallel that I've been chasing all year, I fell short once more. I was hoping, if nothing else, to pull one of the better Rated Rookies from this set, but the best I could manage was Ramon Laureano and Jake Bauers.

Still, the Rated Rookie logo is so reminiscent of the late 80s and early 90s Donruss sets, so these cards have more going for them than your traditional Laureano and Bauers rookies. 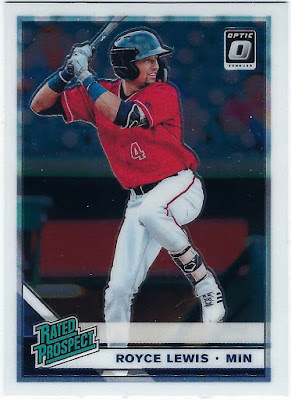 As I mentioned earlier, with Prizm Baseball making its return, I have even less of an incentive to purchase Optic which is part of the reason why I bought this blaster. I wanted to give this product another chance to impress me before I commit to Prizm from here on out.

I appreciate that Panini featured Rated Prospect cards in this set, but I can get chrome prospect cards in Bowman's Best, one of my 2 favorite releases of the year. Though the price point between the 2 products is drastically different, so is the value of the cards. 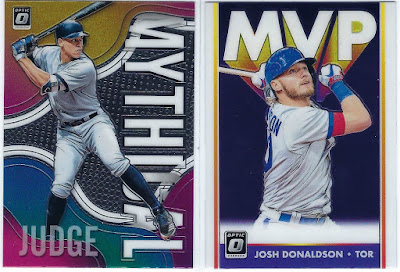 I will admit that the inserts grabbed my attention, mainly because of how they add a much-needed break from the white borders of the Optic base set. The Mythical cards aren't too special; they're just pretty).

The MVP insert set, on the other hand, showcases previous MVP winners on the team that they won the award with. Seeing Josh Donaldson on the Blue Jays reminds me of how dominant he was a few years back, just like when I saw someone pull a Pedroia insert from when he won the 2008 AL MVP award. 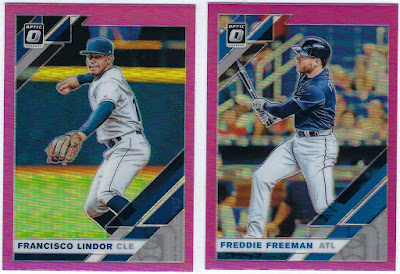 In addition to 6 regular packs with 4 cards each, the Optic blaster delivered an exclusive 3-card pink parallel pack. Maybe I'm tough on this set, but the pink refractors were the only part of this blaster that impressed me.

I've always said that the best thing Panini can do is distract me from the fact that the cards are unlicensed. The pink parallels did this for me in the 2019 Optic set, and I'm sure there are plenty of other refractors that do the same in this product. 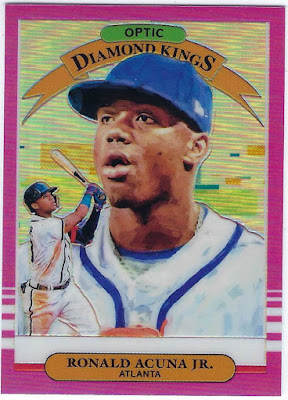 Unfortunately, I'm simply not willing to spend money on another Optic blaster, let alone a hobby box. Maybe I should've gone with the value pack ($10 for 16 cards) which promises 4 lime green parallels since I love these refractors so much.

Panini did a fabulous job with Prizm this year, and I can't wait to get my hands on some Chronicles. Even if I've been low on luck when it comes to hits, I've learned which products I want to purchase in the future while collecting cards this year.

As beautiful as the parallels are, Panini Donruss Optic just isn't one of those sets.
Posted by Henry Blanchette at 6:15 PM