2017 Topps Gypsy Queen: Changing it Up 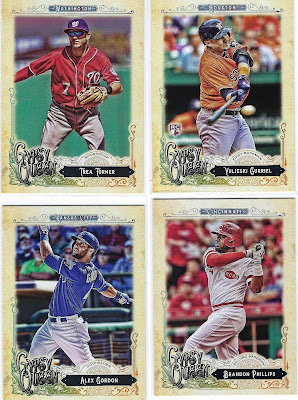 Yes I know I'm 4 months late on posting about 2017 Gypsy Queen, but I only recently made this blog. I knew that I wanted to post about this set, because this was the Gypsy Queen set that changed the entire brand.

This year Topps took Gypsy Queen and shook it up, big time. Gone are the mini cards. Gone are the relics (which I miss the most), and gone are the framed cards which I loved. It became a more unique set and really tried to differentiate itself from Allen & Ginter. I understand that, but I really do wish they had kept relics and those amazing framed cards. 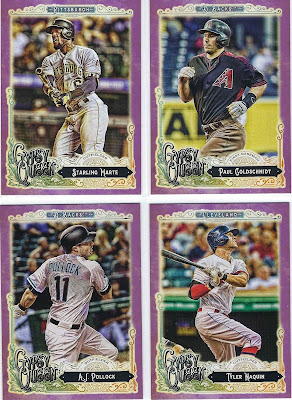 In place we have parallels. These purple parallels (#/250) made there way into yet another set this year. I much prefer the more creative framed cards which not only looked better than parallels, but didn't have to be numbered, so you could acquire them more easily. 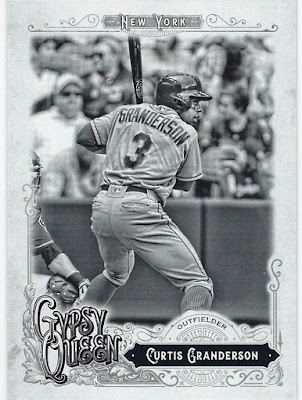 The black and white parallels (#/50) however looked much more impressive. These cards are pretty much perfect. It makes me admire black and white cards even more. Despite the good chance that the low numbered cards would cost a lot to buy online I wouldn't be opposed to buying a few for my player collections. 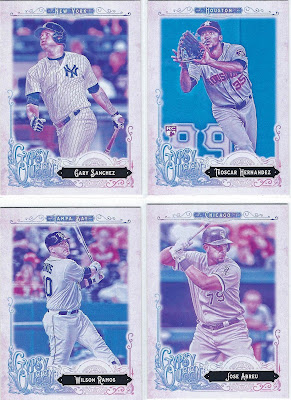 This set was variation heavy. These missing blackplate cards were the most common variations (1:9 packs). They took the black plate out of the picture, but left it in other parts of the card like the nameplate. 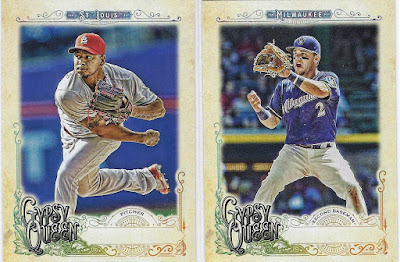 This was by far my favorite variation in the set. The 2 players above are Carlos Martinez and Scooter Gennett. This variation is where they take the nameplate out of the card. I truly believe it allows the logo to shine and helps the cards truly feel like an early 1900's design. It reminds me a lot of Topps 205 and 206. This was also the first year ever in Gypsy Queen that the base cards had the players full name on it, something I think defeats the whole purpose of Gypsy Queen. It should have that classic feel with just the player's last name. 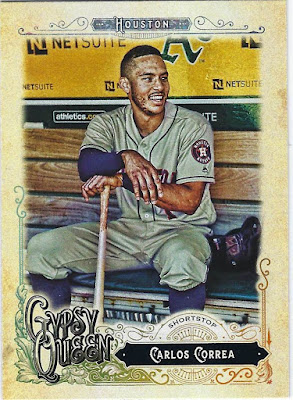 Another variation that was card to notice was the capless variation. Topps decided that hapless cards which are included regularly in almost every other set should be made a special rare variation. I managed to get this capless Carlos Correa which isn't on COMC, but rather going for $15 and $23 respectively on eBay. I plan on holding onto it based on the MVP caliber year Correa has had so far. 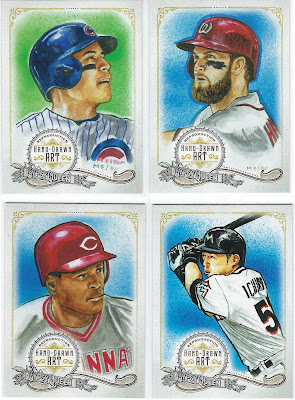 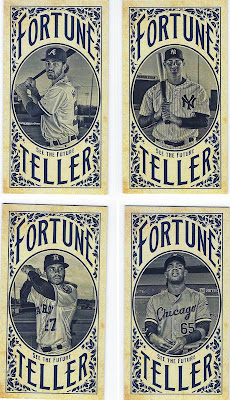 Inserts are a big part of this set as we have some of the most creative insert sets in recent years. The hand drawn art remind me a lot of the one-year brand National Chicle from 2010. They are very well drawn and include bold color choices. Fortune Teller makes bold predictions about what each player will accomplish this year. The 4 listed above are Dansby Swanson, Gary Sanchez, Jose Altuve, and Yoan Moncada. 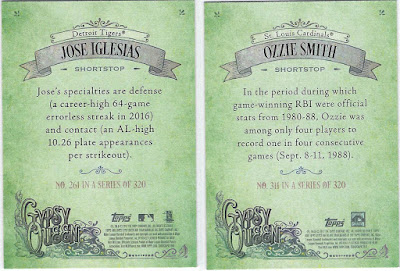 Green backs are similar to the blue borders from this year's Topps Heritage as they are limited to 50. The Ozzie Smith is even rarer, as it's a short print green back. That's a double variation which actually appears a lot in this set. 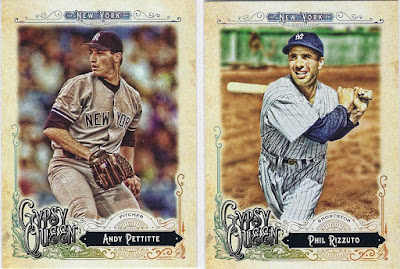 Finally we have the short prints. Topps includes short prints in lots of sets nowadays and the Gypsy Queen short prints are retired player exclusive. That too upsets me, for I love the old Gypsy Queen sets with all the retied players throughout the checklist that I would get cheap at the card show.

Well there you have it, 2017 Topps Gypsy Queen in a nutshell. Changes were made, but for the most part I still enjoy it. After all it is Gypsy Queen my favorite current set.

Posted by Henry Blanchette at 5:59 PM