This is another new series on my blog called Top 5 Cards. This is where I choose a player I collect and show my top 5 favorite cards of him in my collection.

We'll start with the 2015 NL Cy Young award winner, Cubs pitcher Jake Arrieta. After his dynamic 2015 season he was represented a lot in sets and that is how I was able to acquire 28 cards of him.

And now I shall begin the countdown. 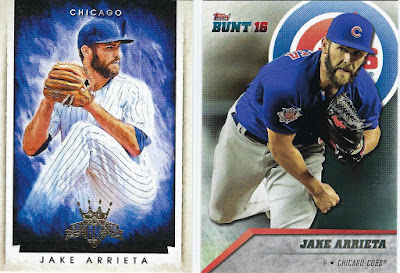 For an unlicensed card, this 2015 Panini Diamond Kings card is pretty great. The blue color spot reminds me of Allen & Ginter, but it doesn't have the boring white borders. Instead there's black around the picture and a cream colored border with a bright gold logo. As for the Bunt card this one almost made the top 5. It's simple and sleek design is nice, but the Cubs logo makes the card. Definitely a favorite of mine, just not top 5. 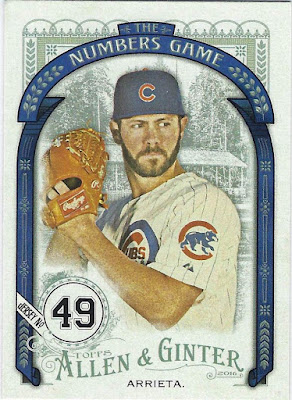 #5: 2016 Topps Allen & Ginter The Numbers Game
Despite not being that much of a "game" this set from last year's Allen & Ginter stuck out as a creative insert set. The black and white background works well with the blue ribbon around the picture of Arrieta. The best part of the card in my opinion is the pattern on top. It reminds me of something Gypsy Queen would do and really ties the card together. 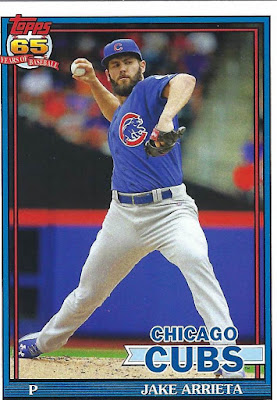 #4: 2016 Topps Archives
Archives has always been one of my favorite sets, but this card took it to another level. The uniform makes the card as the Cubs logo helps make this a simple, yet satisfying card. If we're talking 2016 Archives I think he would've made a better card in the 1979 design, but overall this is an exceptional card with a great action shot of Arrieta. 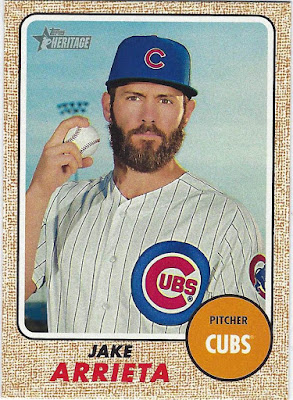 #3: 2017 Topps Heritage
Heritage is my favorite present-day set. 1968 Topps is one of my favorite Topps sets of all-time. Jake Arrieta is one of my favorite Cubs. For me this set has everything going for it. A clean, crisp photo highlights this amazing short print from this year's Heritage. The way he's grabbing the ball helps this card stand out from most others (something you'll see more of later). This card just works and is exactly what I think of when I think about Jake Arrieta. 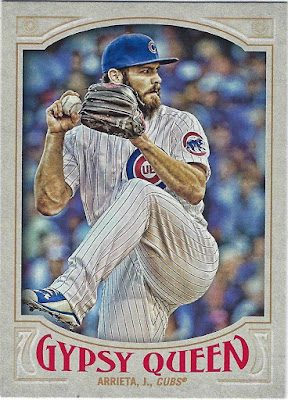 #2: 2016 Topps Gypsy Queen
Gypsy Queen has been a favorite of mine since 2011, however this card takes it to another level. The red writing compliments the blue cap and the blue-striped jersey. But I always love the faded backgrounds in cards and the fact that this card has such a beautiful blue background really helps this card shine. But perhaps my favorite part is the grey border. It's just such a shame that this card isn't #1, but the card that beat it is somehow even more impressive. 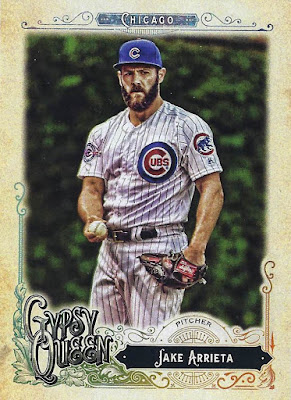 #1: 2017 Topps Gypsy Queen
Let me makes this clear. 2017 Gypsy Queen is one of my least favorite Gypsy Queen sets, however there's no denying this stunning card. It has all the perks of the 2017 Heritage card, him holding the ball and all. But what sets this over the edge is the ivy. Any card at Wrigley should have ivy and if it does that automatically causes me to appreciate the card even more. Add to it the amazing logo in the bottom left corner and there's no question that this is my favorite Jake Arrieta card.

So that's it. My first Top 5 Cards post on this blog. This was my first time doing this and I intentionally used a smaller player collection. I will try it with some of my 100+ player collections soon, because those are likely to yield even more impressive cards.

I will try to post at least 1-2 of these Top 5 Cards a week just so I can show you all some of my favorite cards. Hope you take a look next time.

Posted by Henry Blanchette at 5:51 PM