Welcome to my series on baseball card show trips and recaps.

I attended my local show last Sunday and I haven't gotten around to putting all the cards I got away so I decided to do a recap. A card show recap will occur every time I go to the card show. I won't show every card just the highlights.

This show more than any other I've been to had lots of high end cards for cheap money. There's just something about finding high-end cards in the dime bins that makes collecting so rewarding. 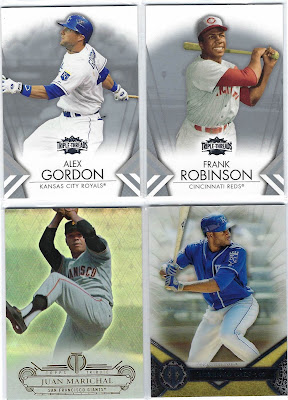 The first example of this are these Triple Threads and Tribute cards. I was very pleased to find these 4 cards of players I collect (the scan doesn't do the Juan Marichal card justice it actually has more of a rainbow refractor type foil). I was also surprised that this included a Topps Tribute card (Lorenzo Cain) from this year. 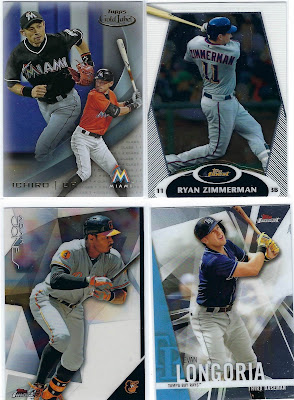 Then I found a trio of Finest (Zimmerman, Jones, and Longoria) as well as a single 2016 Topps Gold Label (Ichiro). Once again we have a high-end card from this year in Evan Longoria which leads me to further question how these vendors get all these cards. 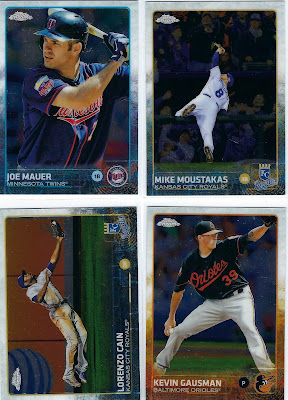 2015 Topps Chrome wasn't a set to be counted out as I managed to snag 4 cards from this set including the 2nd high-end Lorenzo Cain card of the show. 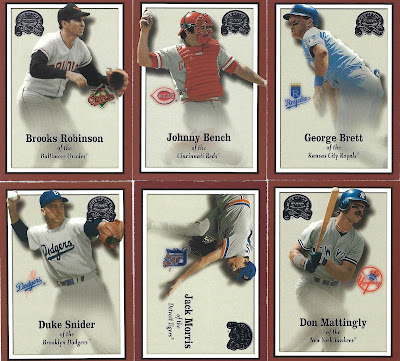 Then came one of my favorite sets made by Fleer, 2000 Fleer Greats of the Game. There were a few handfuls of these cards in the dime bins and I was able to add quite a few to my player collections. I was pretty disappointed that they all came with damaged borders, but I guess that's the price I was forced to pay. 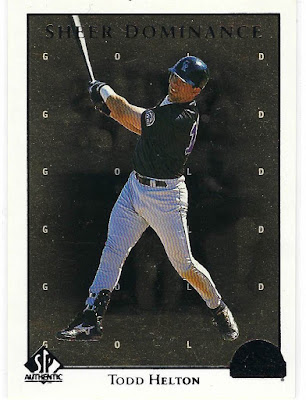 But nothing can really beat finding a numbered card. This is from 1998 Upper Deck SP Authentic and is numbered 1539/2000. The card itself is actually gold not black as is shown in the scanned image. The gold really helps this card which is part of my newest player collection, Todd Helton stand out.

Even though I would most likely never buy any of the cards shown above in packs (high-end packs are just way too much money) I still enjoy filling in my player collections with high-end cards from the dime bins. That to me is a successful trip to the card show.

Posted by Henry Blanchette at 4:56 PM