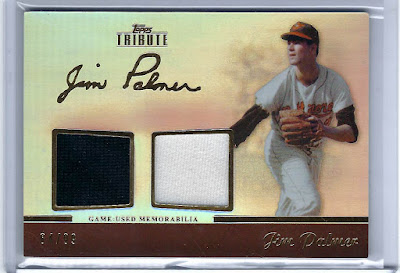 This is another series I'll be doing called Relics/Autos by team. It's basically where I will post every certified relic card and autograph I have for each team in the MLB.

I've decided begin with the AL East and work my way through all 30 teams (plus some more). As you can see from the dual relic of Jim Palmer above from 2011 Topps Tribute (64/99) the 1st team I'm doing is the Baltimore Orioles.

The Orioles are one of my biggest relic/autograph collections. I have 19 certified Orioles relics. Here they are. 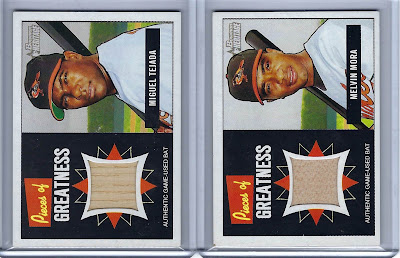 These are a couple of bat relics of former Oriole's stars from 2005 Bowman Heritage. The Miguel Tejada seems to use a different part of the bat then the Melvin Mora. The Tejada bat relic is also how bat relics usually look like nowadays. 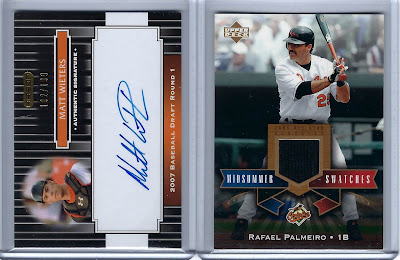 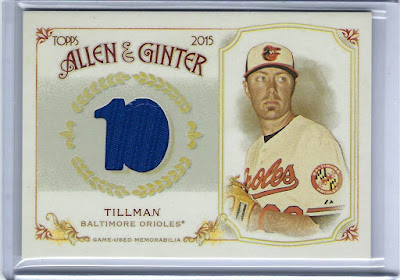 A vendor at my local card show gave this to me after I made a large purchase with him. It's a nice card from 2015 Allen & Ginter of Chris Tillman, but I have no idea to this day what possible Orioles relic could be blue. 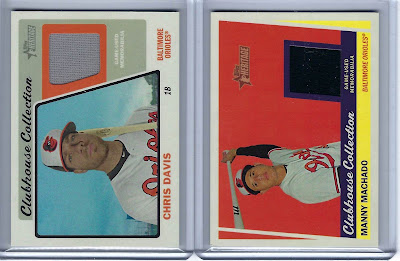 These Heritage relics, however are cards I can tell are jersey relics. The Davis is from 2015 Heritage High Number while the Machado is from 2016 Heritage. I especially love the black Jersey on the Machado card. 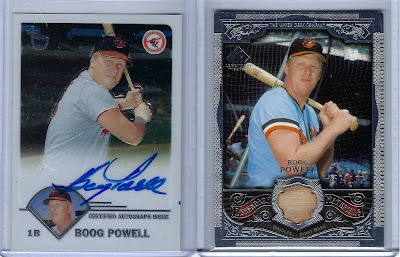 I know most current collectors don't know who Boog Powell is, but I hope someone reading this does. Powell was a power hitter who played most of his career for the Baltimore Orioles. He won 2 World Series rings alongside Frank Robinson, Brooks Robinson, and legendary manager Earl Weaver. He was also the 1970 AL MVP. The card on the left is from 2003 Topps Retired Signature Edition and the card on the right is a bat relic from 2006 SP Legendary Cuts numbered 56/199. 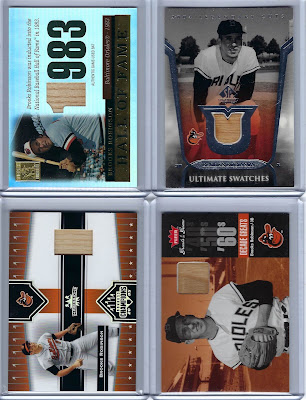 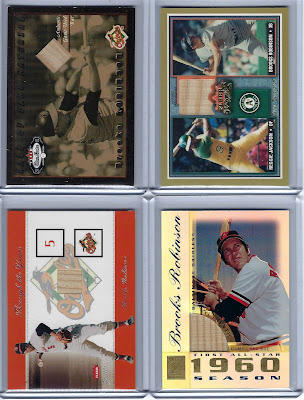 Correction, 8 Brooks Robinson bat relics. None of these are numbered, but that doesn't prevent them from being some of the most impressive relics I own. My dad picked these up at a card show for about $5 each around a year ago. You have some from every major brand of the early 2000's. Topps, (first image top left, second image bottom right) Donruss, (first image bottom left) and a lot of Fleer relics which I believe look the best by far. 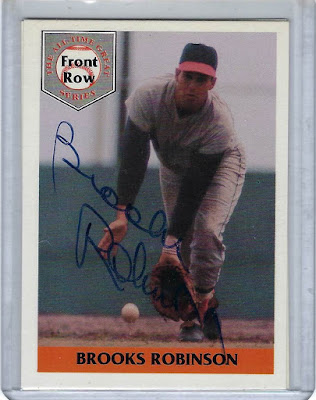 But then there's this. 1992 Front Row Brooks Robinson autograph. 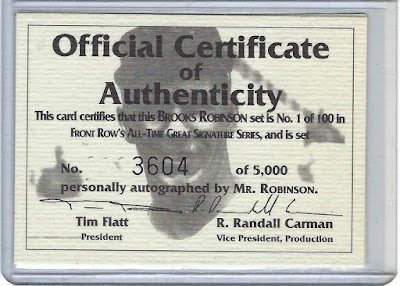 With a certificate of authenticity. The card itself is without licensing and this was back in the day where unlicensed cards couldn't look good even if the company tried. Still it's a certified autograph of the greatest defensive 3rd Baseman of all time and that's good enough for me.

Posted by Henry Blanchette at 2:25 PM