Bob Gibson was a lot of things. A stellar pitcher, a member of the 3,000 Strikeout club, and someone you did not want to mess with while he was pitching.

Gibson is also one of my larger player collections of a Cardinals player. I have a total of 45 cards of him, including a few originals from the 60's. I collect Gibson because of how beautiful some of his cards are. There are enough images out there so each card can stand out and they don't have to repeat images a lot.

Bob Gibson has had a lot of memorable cards made of him. Here are my top 5 plus an honorable mention. 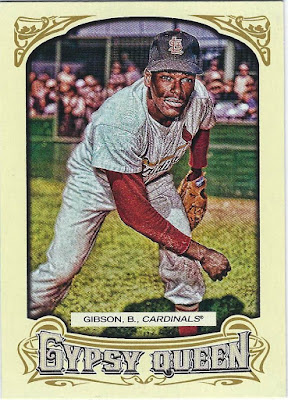 I feel like I've said all I need to say about Gypsy Queen. I love the brand, I love Bob Gibson. Therefore this card should be amazing and it is. The photo is near perfect as it has a great shot of Gibson. I love the 2014 set as well, so it really does stand out. However it just doesn't stand out enough to make it to the top 5. 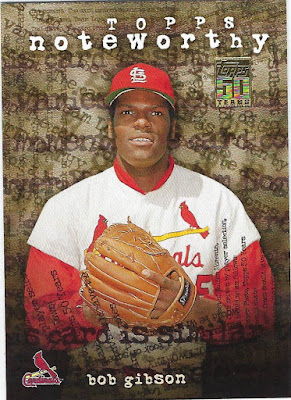 Noteworthy was an amazing insert set from 2001 Topps. It featured a mix of current and retired players and each card had an amazing design with the notes in the background. Add to it one of the best photos of Bob Gibson I've ever seen on a card and it's no wonder why it made the top 5. Plus it has the classic looking 50th anniversary stamp which adds a nice little touch. 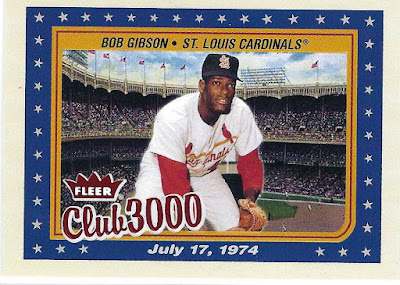 Truly an amazing card commemorating a truly amazing milestone.  Only 16 pitchers have struck out 3,000 or more players. Bob Gibson is one of those 16. This amazing card has the date of the milestone as well as stars around the border. I love the stadium background as it gives the card a touch more color and really ties the card together. But the best part is the big Club 3000 stamp with the Fleer logo. This is one of the last products made by Fleer, but at least they went out with a bang. 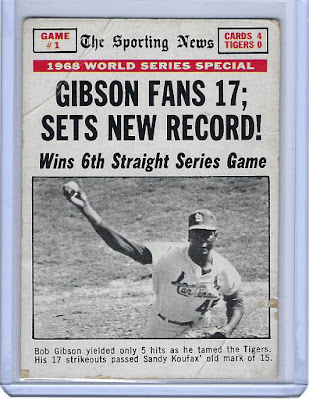 This card is just so vintage. The classic headline looks like a newspaper front page and includes a great black and white photo of Gibson. It includes the headline of his historic game 1 of the 1968 World Series against the Tigers in which he struck out 17 players. The Cardinals lost to the Tigers in 7, but Gibson like this card stood out in a very good way. 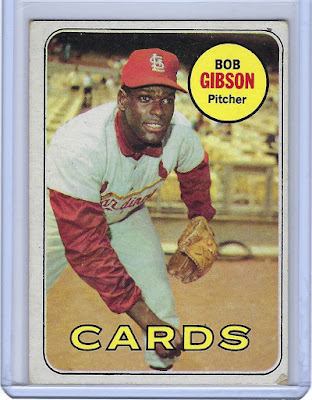 While the World Series headline card was nice this card is so simple, yet so great. I'm not a big fan of the boring 1969 set, so the card has to blow me away for me to like it. This card does that and then some. The photo is just so 60's, so Bob Gibson. The rest of the card is actually pretty nice. I like ow they can take a simple set design and make it stand out. Which is exactly what Stadium Club is about.  Thats the reason why I like this card and consider it one of my favorites of Gibson, despite a lackluster set design. 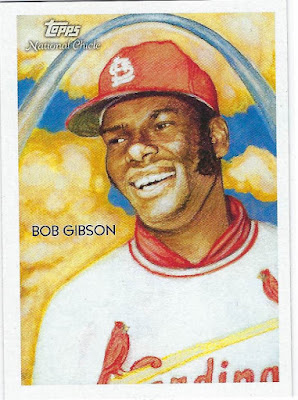 Oh how I wish we could've seen more than one year of National Chicle. This 2010 set stood out like no other and has such an amazing background. Each card in this set is different, something that can be hard to do. However Topps pulled it off by making a whole set of unique cards. But this one with the arch in the background is a symbol of not just Gibson, but St. Louis as well.

Well there you have it. My top 5 Bob Gibson cards. I tried to include vintage as well as modern, so the list could be balanced. I will definitely try to do that for vintage players in the future. I'll also try to upload another top 5 by the end of the week.

Posted by Henry Blanchette at 2:57 PM