Back At the Card Shop 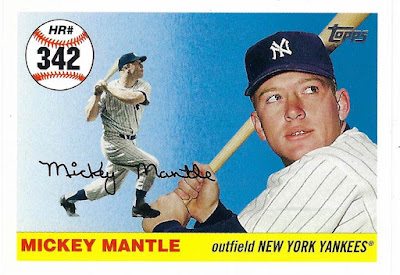 Last weekend I returned to the card shop I went to a few weeks ago for 1 main reason. The owner still had 4 rows of dime cards I hadn't looked through yet. Therefore, along with my dad, I went back to see what I could get.

Like last time, there was 1 player who was prominent in these dime bins. A player who I was able to pick up almost 15 more cards of in this visit. 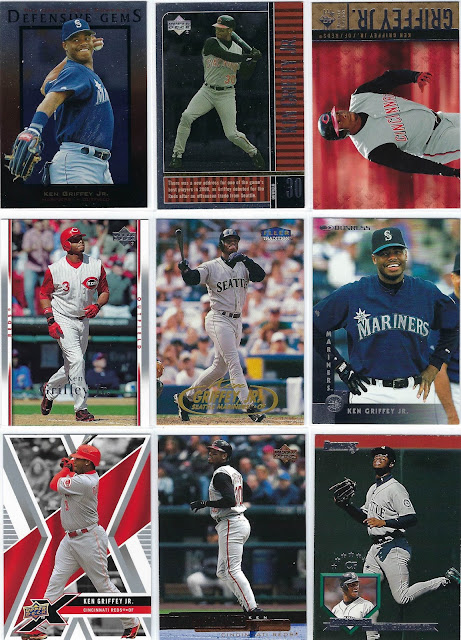 There were many cards of "The Kid" in these bins. Most were from his days with the Reds, though some were from the beginning of his career in Seattle. 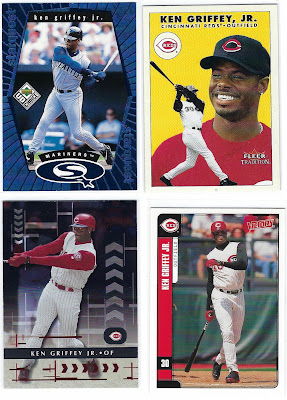 This visit, combined with my previous trip has put my Ken Griffey Jr. card total at well over 100 cards, becoming 1 of about 15-20 players in my collection to reach that total.

But besides finding all sorts of new Griffey cards, there was still a variety of other cards. 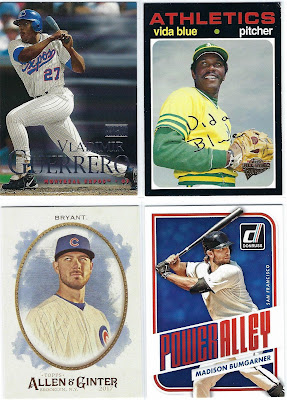 Cards of all different players from all different years. Each and every one of these cards has something special about it, which is why I chose to buy each card. The Vladdy is a card of him I don't have. The Vida Blue is similar to one that made the top 10 of my A's card list. The Kris Bryant is card #1 in this year's Allen & Ginter set. Finally, the Bumgarner card shows a unique shot of the dominant pitcher not pitching, but batting at the plate, another thing he is recognized for. 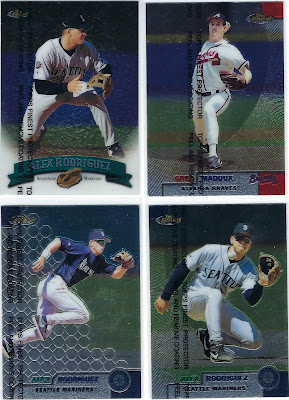 I also found 4 Topps Finest cards from the 90's that still had their protective seals on them. 3 of them are of Alex Rodriguez while the one in the top right is Greg Maddux. Specifically, the A-Rod in the top left is from 1998 while the other 3 are from 1999 Finest. 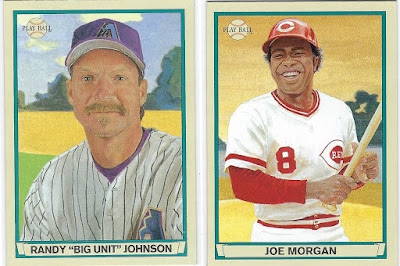 I believe I also got some Play Ball cards from the last visit, but I had no problem getting more. These 2 cards show the 2 different styles of the cards in this set. The Randy Johnson had his nickname on the card, but since Joe Morgan didn't have a definite nickname, so that part was left out. 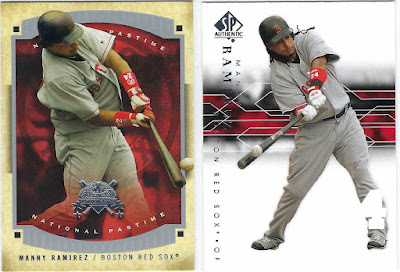 And of course, I was eager to pick up 2 new cards of Manny Ramirez. He's a bit controversial in Boston, and very controversial everywhere else, but he was one of the most talented hitters to play the game, even before steroid allegations became official. David Ortiz has always spoken very highly of Manny, especially in Ortiz's biography which I'm currently reading. 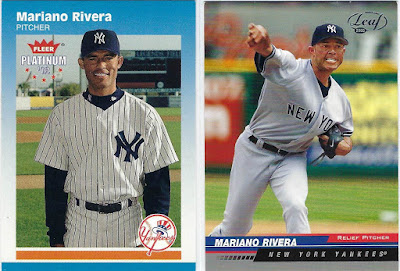 On the rival team of Manny Ramirez for a while was the greatest relief pitcher to ever play, Mariano Rivera. Even though he may be a Yankee, I've still been collecting Rivera for years now and I am nearing 50 cards of the 13-time All-Star. 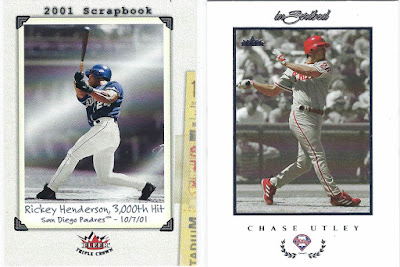 As I was nearing the end of the last few rows, I picked up 2 Fleer cards from the early 2000's which reminded me of how much I like and miss the company. These beautiful high-end cards of Rickey Henderson and Chase Utley were some of my favorite cards I purchased that day. 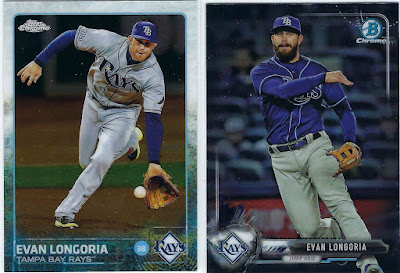 Evan Longoria is one of those players that is in almost every single set. Simply because when the Rays were both good and bad, he was still a very good player so he was represented well in sets. 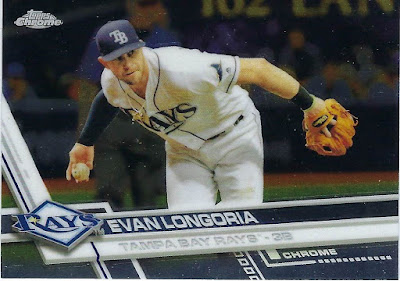 I need to start picking up more of the dime cards I see of him because if I did, my total amount of cards I have of him would rise very quickly. 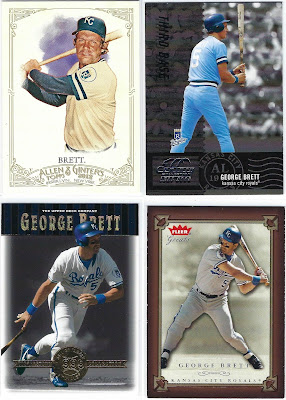 Many of my favorite players have played their whole career for one team, which is the case for George Brett. His loyalty to the Royals and him staying in Kansas City for his entire 21-year career caused many cards of Brett him to be produced. Here, there is a card of George Brett. from each of the 4 major card companies. Topps in the top left, Donruss in the top right, Upper Deck in the bottom left, and Fleer in the bottom right. 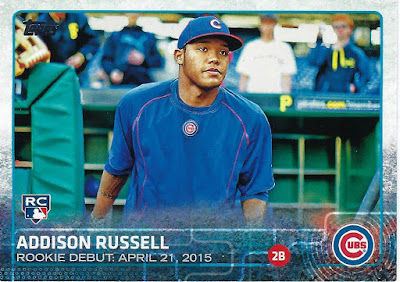 But by far the best card, especially for the value, was a 2015 Topps Update rookie card of Addison Russell for yes, just 10 cents. Even though his batting average has been pretty bad (he's never hit above .240 in a season), he still was an intricate part of the Cubs' 2016 World Championship season, so fans will forever recognize and appreciate him for that.


Posted by Henry Blanchette at 7:24 PM