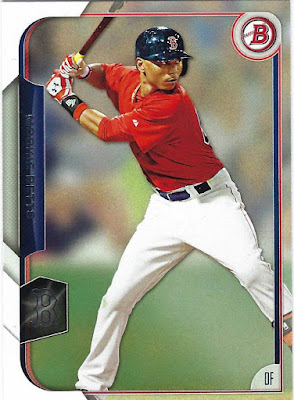 After the retirement of David Ortiz last season, I knew I had to choose a new favorite current Red Sox player. And while young stars like Andrew Benintendi and veterans like Dustin Pedroia were possibilities, the clear choice for me was their outfielder and 2016 AL MVP runner-up, Mookie Betts.

Since his breakout season in 2016, Betts has won 2 Gold Glove awards, 1 Silver Slugger, been an All-Star twice and was runner-up to Mike Trout in the 2016 MVP race (and some say he was snubbed of the award).

I currently have 17 cards of Betts, but considering the consistent player he is becoming, I expect that number to rise. Until then, here are my top 5 cards of Mookie Betts. 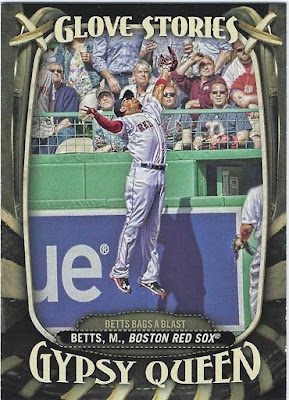 The Glove Stories insert has been in almost every Gypsy Queen set made, and with Betts winning 2 career Gold Gloves thus far, he has been featured in the insert twice as well. The insert set shows mainly outfielders, but some infielders, making spectacular catches on certain dates. This card of Betts was taken at Fenway Park as he robbed none other than Bryce Harper of a home run back in 2015. The excellent attention to detail used in the background along with the Fenway Park wall is a great addition to this card. Another great feature is the border which was made to look just like a glove, hence the insert set "Glove Stories." This card, to me, sums up who Mookie Betts is, which is why I put it on the list. 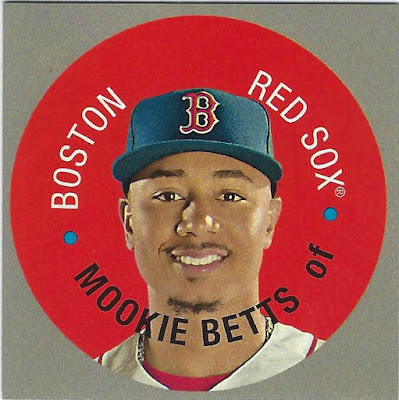 This may not be the same size as a regular baseball card, but it was made by Topps and included in their 2017 Heritage set, so it has to be a card, right? Regardless of that, this thing is so cool and Mookie Betts really is the best player to be included on this disc, especially since the Heritage set came out not too long after the end of Betts' fabulous season. What I like about this disc is the simplicity. It's just a picture of Betts with his name and team name on a disc with a red background and grey border. When describing this card it doesn't seem too interesting, but the fact that Topps was able to pull it off is very commendable. That's why this bizarre card made the top 5. 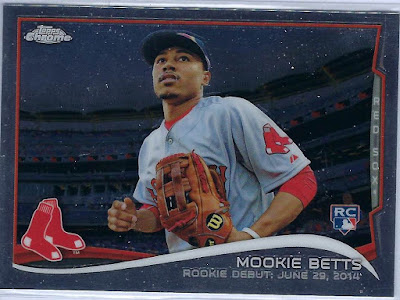 I, personally, have never bought Topps Chrome Update at a retail store, but the reliable dime bins are responsible for bringing me my first and only rookie card of Betts, which, for some reason is worth a whole lot less on COMC than Betts' base card from Chrome Update. And I'm okay with that because I still have a very nice rookie card of Betts that landed at #3. This card is from Betts' debut on June 29th, 2014, when he got his first major league hit. This hit not only occurred at Yankee Stadium but Derek Jeter actually fielded and handed the ball to Betts as a souvenir. That story is something I wouldn't have known if I had his base rookie rather than his MLB Debut card, which is why I'm happy to put this card at #3 on the list. 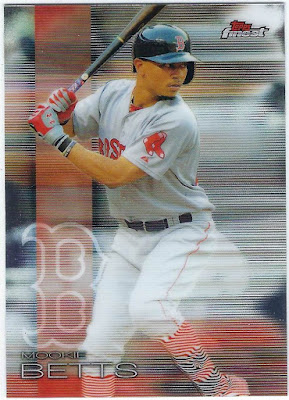 I don't collect very high-end products, therefore I don't have many cards from sets like Topps Finest. However, I'm more than glad to say I own Mookie Betts's 2016 Topps Finest base card, showing him in my favorite Topps Finest set of all-time. The red and grey streaks across the card are a perfect accompaniment to Betts' red and grey jersey as it almost looks like a continuation of his jersey and the design. The set does what it does very well, and what it does is it creates a set that is so modern that it actually appeals to me a lot because I've never seen anything like this set before. Every detail of the base set from the logo to the font has definitely been taken into heavy consideration, which is obvious at first glance of the card. That is what I like and appreciate about this card so much. 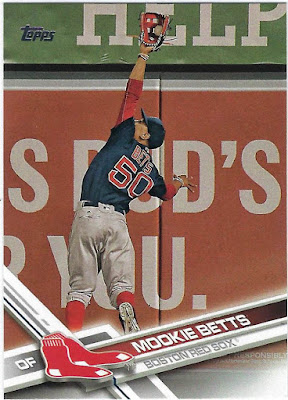 I don't think I've ever chosen a Topps Flagship card for the #1 spot of a modern player, but Betts' 2017 Topps base card is easily my favorite card of him as well as from the set. This card shows Betts making a stunning catch on the road at what I believe to be Yankee Stadium, the place where he made his debut. While making this incredible catch, Betts is proving to all of us why he is a Gold Glove winner and how talented he is. All of this can be very hard to capture and put on one baseball card, but I truly believe that Topps captured Mookie's achievements as well as who he is on a card. That is something that makes the #1 card not just on Betts' list, but almost any top 5 cards list.


Posted by Henry Blanchette at 5:30 PM