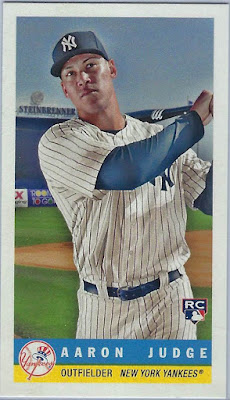 Aaron Judge was without a doubt the hottest player to collect in 2017. Every set that came out had at least one card of Judge, which became many collector's goals to obtain throughout the year. And while I'm not an Aaron Judge superfan like some collectors (I don't collect him yet because of how expensive his cards are), I still have acquired 6 rookie cards of the AL Rookie of the Year. Today, I'm going to show you what they are.

The card at the top of the page is the bazooka insert from 2017 Topps Archives. I may not have gotten Judge's base card, but in the blasters, I bought of Topps Archives I was able to get this insert, which I even like better than his base card in the 1960 Topps design. 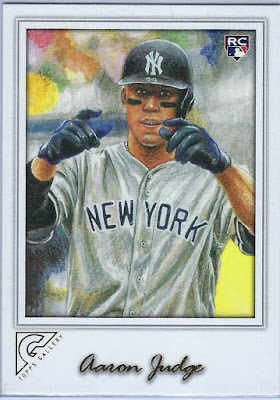 The next card is one that I got in my most recent card purchase which is 2017 Topps Gallery. I got his Gallery base rookie card as the 2nd card in my first value pack of the set and I instantly was over-joyed. Like I said, I'm not going to be buying individual Judge cards until I see how much his 2018 cards go for simply because of how expensive his rookies are. So, to be able to get his cards in packs rather than by choice is a huge bonus. After all, this card on COMC is going for more than I paid for the entire value pack. 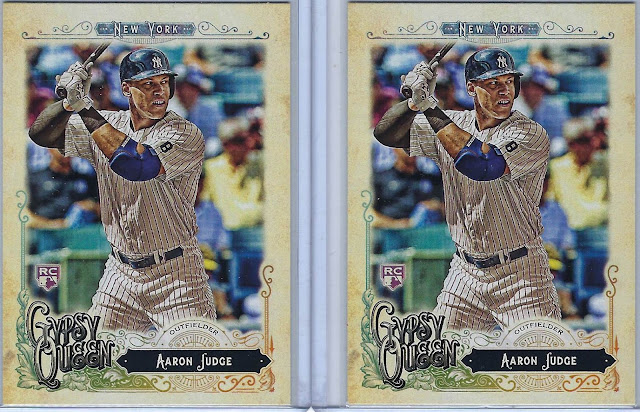 Next is not 1, but 2 rookie base cards from 2017 Topps Gypsy Queen. This was a set that I acquired a few doubles of this year due to buying a decent amount of it, so one of the players I got doubles of was Aaron Judge and I'm definitely not complaining about that. Even though this card is pretty simple, I still love the card a lot. Especially because of how well, at least in my opinion, Judge's pinstripes go with the rest of the card. The black and white on his jersey is a combination that also appears on the nameplate which is a small feature that I really enjoy and appreciate. 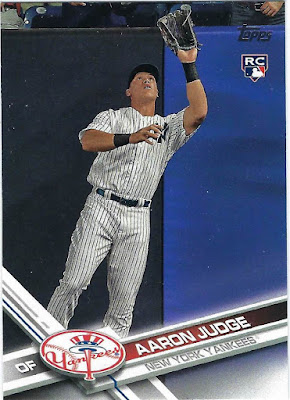 But when collecting, you usually remember your first of something. And my first Aaron Judge rookie card was from Topps Flagship. The now famous photo on the card shows Judge getting ready to make a catch in the outfield in Yankee Stadium. This was not only used for his Topps base card but Topps Chrome as well. Therefore, this simple image is one that is easily recognizable by almost any collector who bought and looked at cards in 2017.

However, my favorite card of Aaron Judge is by far the base image variation that I got from a $10 rack pack of 2017 Topps Chrome. With his base image being so recognizable, I knew when I got this card that it was special. So I looked at the code on the back, then online, and sure enough, this card was and still is going for over $100. That's not bad for a $10 purchase. And even if he doesn't develop the way most think he will, cards like these are still a huge deal when you get them. That is what's pushing me to collect Aaron Judge.


Posted by Henry Blanchette at 6:05 PM