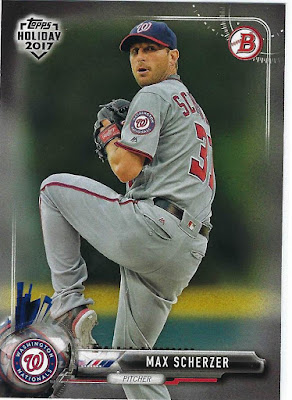 Today I went to my local card shop to pick up a Christmas baseball card gift which I will be posting soon. By making the purchase of a Topps product, my dad and I each got a Topps Holiday promotion pack featuring 3 cards.

Topps began this promotion just before Thanksgiving and was scheduled to run until supplies last. That's why I was very pleased to see that I was able to get a couple of these packs 1 month after the promotion began. 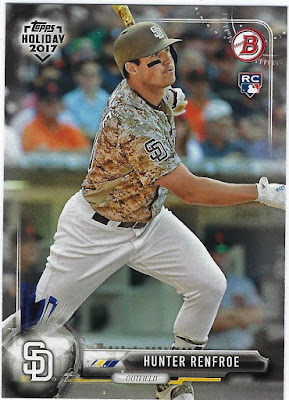 Considering that this is a holiday promotion, I was very surprised at how these cards don't have much of a holiday theme whatsoever. The set is in the Bowman base card design (not sure why) and the only difference is a minuscule Topps Holiday logo on the top left that isn't very festive. Still, it's free baseball cards, so I don't have very much to complain about. 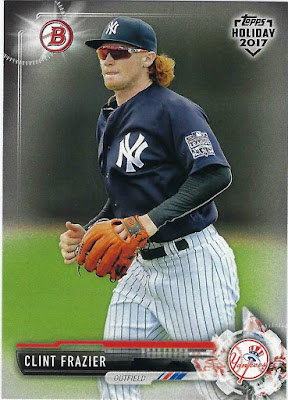 As for the cards themselves, I was able to pick up some nice players in the 6 total cards that I got. One of those players is Clint Frazier. Frazier is the only prospect whose card I got, and it's a nice one to have. Especially since Frazier is expected to emerge in his first full season in 2018. 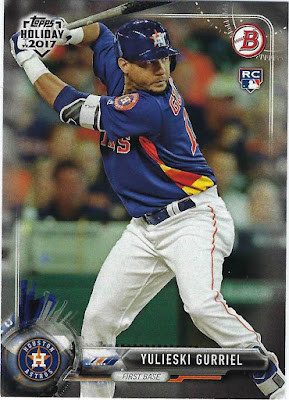 Yulieski Gurriel is another player whose card I pulled in these exclusive packs. I don't really have much to say about Gurriel. He just won a World Series, but he's not a player that truly stands out to me. 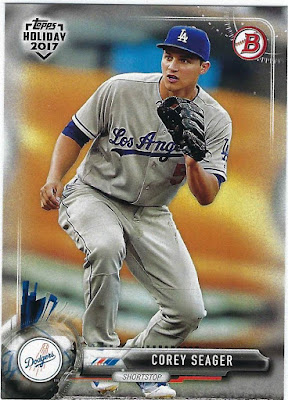 Thankfully, there was a card of Corey Seager, a player I collect, that I was happy to obtain. Seager has been one of my favorite players in baseball since I began collecting him last season. I really like how much power he has which is rare to find in a shortstop. Then again, Seager is 6 foot 4, so he's awfully big for his position and therefore is expected to be a power hitter. I'm excited to see what he and Bellinger can do together in years to come. 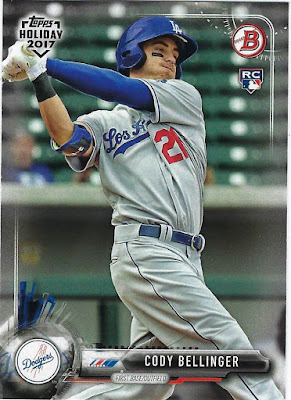 The final of the 6 cards I pulled was, in fact, of the unanimous 2017 NL MVP. Bellinger hasn't been someone who I have gotten as many cards of as Aaron Judge, but I would take him over Judge any day because of his balance of power and defensive ability. It's crazy to think about, but someone as talented as Bellinger is still not as hyped up as Aaron Judge, so I have to say I like him more and I'm glad to get this card of him.


Posted by Henry Blanchette at 5:20 PM