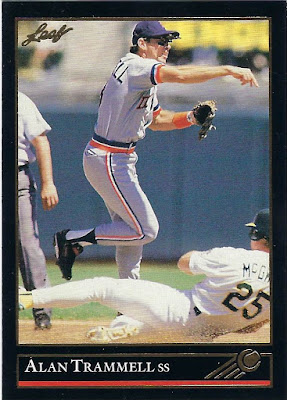 Last night, Alan Trammell and his teammate Jack Morris were elected to the Baseball Hall of Fame via the Modern Era Committee. These 2 talented players combined to have 11 All-Star appearances and played alongside Lou Whitaker to win the 1984 World Series.

These teammates, friends, and talented players weren't elected on the regular ballot when they most likely should've been. So a committee consisted of Bobby Cox, Rod Carew, Dennis Eckersley, and more decided to elect these 2 players yesterday. I'm doing the top 5 for Alan Trammell and I'll be doing it for Jack Morris later this week.

I have 22 cards of the star shortstop, here are my top 5. 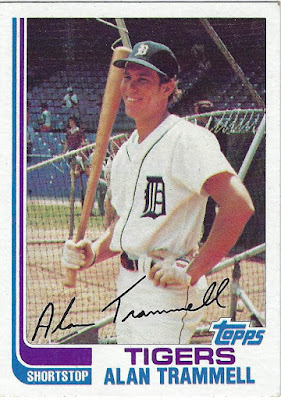 Throughout his career, Trammell proved his strong dedication to the Tigers and to baseball. His 2365 hits rank 7th in Tigers history, but when you're behind names like Ty Cobb and Al Kaline it's pretty understandable. Not only was his defensive ability some of the best on his team, but he is arguably a top 10 defensive shortstop of all-time. All of these accomplishments give Trammell many reasons to smile just as he is doing in his 1982 Topps card. He appears on this card during batting practice, with a bat in his right hand and a smile on his face. It's very different from the serious looks on the player's faces that usually appear on cards, and I appreciate this photo decision, so I had to put this card on the list. 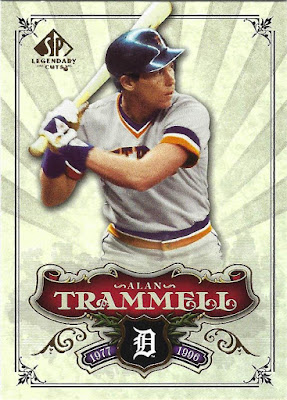 SP Legendary Cuts has always been a set that I liked. I always liked these types of retired player sets made by Upper Deck, Donruss, and Fleer in the mid-2000s, but it was Legendary Cuts that ended up lasting longer than the others. The 2006 set is one of my favorites because of the background color. I love the cream color and the design used in the background as well. That along with the red banner gives this card a very high-end feel and I actually like that a lot. I also really enjoy the picture used of Trammell. I don't usually see pictures of this road jersey with stripes on the sleeves, so I have to give Upper Deck credit for using a more unconventional image on this card. 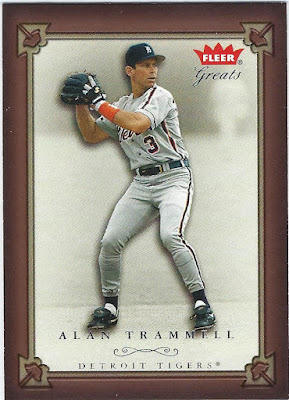 2004 Fleer Greats of the Game is one of my dad's favorite sets ever made. He collected a lot of the individual player cards when the set came out 13 years ago, and one of those players that he chose to purchase a base card of was Alan Trammell. I have to agree with him, as this set totally blows me away after each and every card I see from it. The set is simple but is elevated to become spectacular. The brown borders look like stunning frames around the rest of the card which appears very sleek. Especially the font on the bottom, which is written out in a slight silver font that ties the card together. Overall, this is a classy set and this is a fabulous card from that set that I am glad to put in at #3. 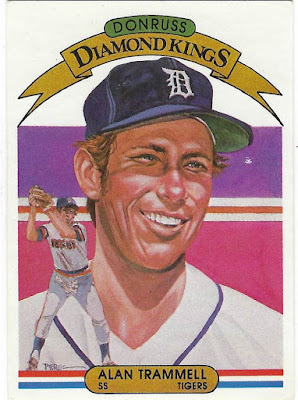 The original Diamond Kings cards were known for their crazy color combinations on each and every card. Trammell's 1982 card is no exception as it pairs the pink and purple combo and actually puts it on a card, creating one of the craziest baseball cards in my collection, and it somehow works. You can definitely tell how much attention to detail was used on this card. Whether it's the banner on the top or the details included on the image's of Trammell as well as each and every color being there for a reason. And even though there are many colors on this card, there isn't too much and nothing is crowded, which is something I certainly appreciate. 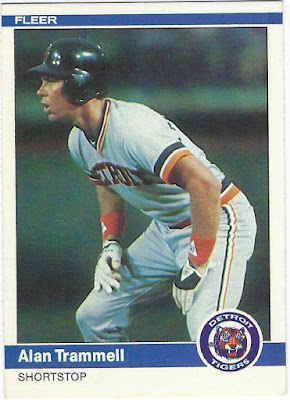 But even before I saw the smiling Trammel card, the 2 classy looking cards, and finally the colorful card, I knew Trammell's 1984 Fleer card would be #1 on the list. This incredible card shows Trammell playing a night game on the road. He appears to be on the base-path ready to begin running. That's it, nothing crazy whatsoever. There aren't too many things going on, it's a very simple card that Fleer was able to excel in creating. It looks absolutely amazing and simple at the same time. Those 2 qualities are hard to find in a card, no matter the decade. So when I find a card like this one of Trammell, I feel like it rightfully deserves the #1 spot.


Posted by Henry Blanchette at 6:46 PM