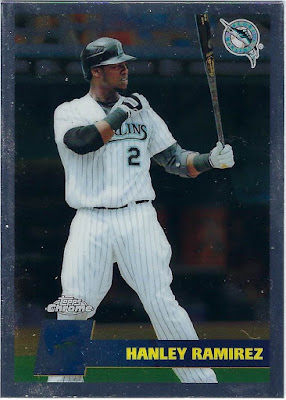 For a few years, when mentioning some of the best players in baseball, you couldn't leave Hanley Ramirez out of the conversation. The 2006 NL Rookie of the Year was signed by the Red Sox as an international player before traded to the Marlins for Josh Beckett and Mike Lowell. And while the trade eventually helped the Red Sox win the World Series in 2007, they gave up a player who went on to have several fantastic seasons for the Marlins.

The Red Sox brought Hanley back on a 5-year contract that began in 2015 and he's played a variety of positions for Boston during that time, though his best season in Boston and one of his best ever was his 2016 season at first base. And while he may never equal those numbers again, I will never forget that legendary bounceback year that made him one of my favorite current Red Sox players.

Ramirez's future as a Red Sox is in jeopardy considering they want a big bat but just brought back Moreland to play first base, meaning Hanley could be out of the lineup if they sign a DH. That means my total of 84 cards of Hanley Ramirez might not rise that much ever again. At least I have the past memories and great cards, including my top 5, to remember. 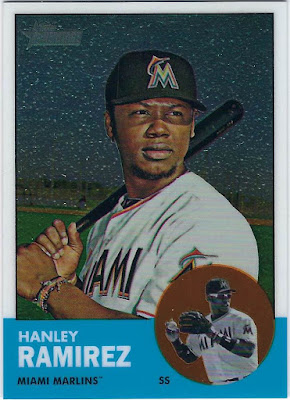 The first sets to hit the shelves in 2012 gave collectors their first look at the Miami Marlins uniforms on baseball cards. This Hanley Ramirez card is an example of that and while I have his base card, it was the chrome refractor that I chose to put on the list. The chrome adds such a nice detail to the card that isn't done by just the base card. Not to mention that I thoroughly enjoy the 1963 set that this is based on, so this year of Topps Heritage is a favorite of mine. I just really like all the details, especially the action-shot in the bottom right. The Miami Marlins uniforms were also a big improvement over the Florida Marlins, so it was nice to see something new on a card. These details made this card an easy choice for the top 5. 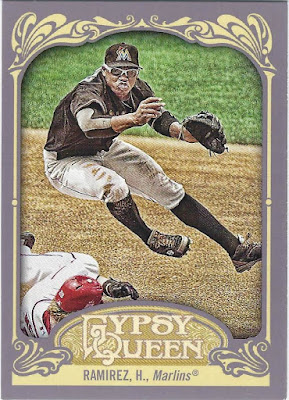 Here's another 2012 Hanley Ramirez card that shows him making an excellent defensive play over Nationals outfielder Jason Werth. I truly wanted to put this card in the top 3 or 2, but the competition was just too stiff, so I had to stick the card at #4. Regardless of that, 2012 Gypsy Queen is one of my favorite Gypsy Queen sets, and this card is one of my favorite cards in the whole set. These 2 details alone are definitely enough for this card to make the list, but I'll also include one more. Since 2012 was the first year of the Miami Marlins, and Gypsy Queen is such an early released set, I believe that this new uniform was photoshopped onto Hanley. If so, Topps did an incredible job with the photoshop, which I know seems expected nowadays. But, looking at 1970's photoshopped and airbrushed cards will make you grateful for cards like this. 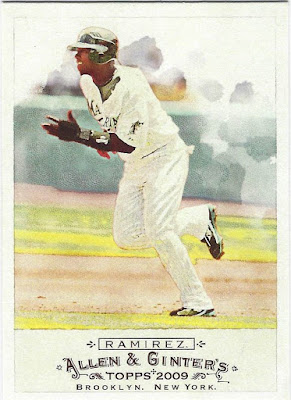 If I were to do a ranking of Allen & Ginter sets, I would have to put 2009 near or at the top. Topps' decision to focus less on the random color patches and more on the actual picture proved to be a smart decision as the pictures on each and every card in this set is beautifully painted and show off what a truly fantastic Allen & Ginter set looks like. This card shows Hanley on the basepath from first to second base at the first Marlins ballpark. The attention to detail on this card truly is extraordinary, even down to the details like the ballpark dirt and the faint stripes on Ramirez's uniform. And while the card may be a bit bright in terms of all the color, I truly think there are way more positive aspects than negative on this stunning card. 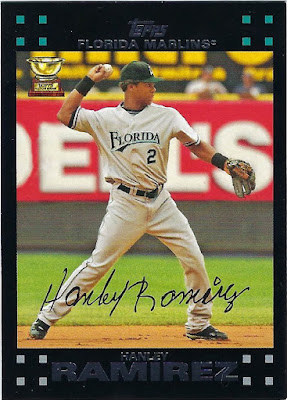 Hanley's 2007 Topps card features the Topps All-Rookie Cup in the top left corner. This cup was well deserved after Ramirez's 2006 NL Rookie of the Year season where he hit .292 with 17 homers, 59 RBI, 51 stolen bases, and 46 doubles that season to earn him the honor. However, my favorite part of this card would have to be the pose Hanley is taking. He seems incredibly confident as he is ready to throw the ball to what I believe to be first base. Whoever took this photo did an incredible job as they captured Hanley at the perfect time to create one of my favorite cards of the 2007 Topps flagship set. Plus, he actually signs his name in a legible manner, so you have to give him credit for that. 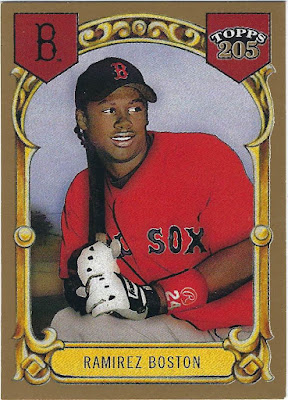 I'm sorry, but I had to sneak a card of him on the Red Sox in here. However, you may be surprised that this card is from his first stint in Boston, you know, the one with 2 at bats? This card is one of my dad's favorites of all-time, and I can see why. The card shows a very young Hanley in an eye-catching Red Sox jersey holding a bat all wrapped up in 1 card from one of my favorite sets ever made. I really appreciate how someone actually put in an effort to alter the photo and make it look like a drawing. This is very uncommon, especially with all the technology available. So to see all these details on 1 card makes it clear that this card belongs at #1.


Posted by Henry Blanchette at 5:31 PM